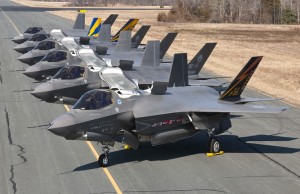 WASHINGTON: The F-35A struck by fire as it took off from Eglin Air Force Base has been secured and is under armed guard in a secure hanger and the Air Force and Marines are not flying their versions of the Joint Strike Fighter program until they know more about the fire’s causes.

“We will resume flying once we know more about the cause of the F-35A fire that occurred at Eglin AFB earlier this week,” Capt. Richard Ulsh, a spokesman for Marine aviation, said in an email.

The 33rd Fighter Wing, responsible for F-35 training at Eglin Air Force Base, said Wednesday morning that its “commander has decided to continue the temporarily (sic) suspension of F-35A flights at Eglin in the interest of safety as we continue to investigate the cause of the mishap.” First Lt. Hope Cronin said in an email to reporters that “We have no further information regarding the nature or extent of the damage” yet.

The fire-damaged plane, under the control of Air Education and Training Command, has been secured as if it were a production aircraft and this was a problem unlikely to affect the rest of the F-35 fleet. This is the first time all the commands and services have grappled with a potentially serious flight incident and it seems pretty clear from what I’ve heard that no one is sure what the protocols are for a plane that is both in the test phase and in low rate production — call it the curse of concurrency. The difficulty is that AETC’s conduct — which appears to be exactly by the book and is designed to ensure that no one else can influence the investigation — means that neither the other services nor the Joint Program Office know much about what has happened to the aircraft.

Compounding this is the fact the Frank Kendall, head of Pentagon acquisition and the one man who could untie this knot with a single memo, is on vacation. Meanwhile, the JPO and the Air Force’s 33rd Fighter Wing, the Marines and the Navy know almost nothing about what happened to the aircraft. It sounds as if someone at Kendall’s office of acquisition, technology and logistics (ATL) may need to ensure that data, photos and other information from the aircraft is shared by AETC so that if there is a systemic issue that may affect the fleet everyone can know it as quickly possible.

Readers who may be wondering why you haven’t seen the word grounded should know that grounding has a specific meaning for the military and these aircraft have not been grounded — yet. Grounded means the plane won’t fly until further notice or the specific conditions that led to the plane being banned from flight is found and fixed. So far they’re expecting to get the planes back in the sky as soon as they have some idea as to the fire’s cause.

A congressional aide who follows the program said today that Hill staffers had received little new information from the services or the Joint Program Office about the plane’s condition. The assumption is that a problem with the F135 engine, made by Pratt & Whitney, caused the fire. And the engine’s core is the likeliest place for such a problem.

The program does not yet have an initial damage assessment. My understanding is detailed photos of the aircraft have not yet been received by the authorities.

Authorities are choosing subject matter experts to staff the Safety Investigation (SIB) and Accident Investigation boards (AIB) to identify the accident’s causes and any measures need to protect the fleet and its pilots.

The SIB should convene “within days” and is expected to produce an assessment within 30 days.The AIB, said a program official, will begin “its investigation as soon as it can do so without interfering in the SIB investigation.” It should be done in 60 to 90 days. Unless there are classified or personnel issues most of the reports should be released.