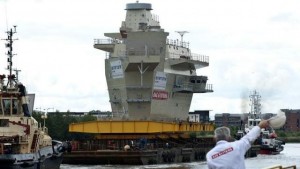 The 65,000-ton carrier Queen Elizabeth is being constructed in Rosyth, Scotland. Here, the aft island leaves the yard in Glasgow heading to Rosyth. (BAE Systems)

ROSYTH, SCOTLAND — Within sight of one of the crowning engineering achievements of Queen Victoria’s reign, Britain’s naval shipbuilding industry is counting down to the launch of a new aircraft carrier for the Royal Navy named after the current monarch, Queen Elizabeth.

The warship will be floated for the first time on July 4 in the Babcock-operated dock here as part of an official naming ceremony attended by the queenThe yard is almost within the shadow of the 1890s-built Forth railway bridge.

With three F-35 fighter jets due in Britain for the Royal International Air Tattoo and Farnborough air show later in July, there has even been speculation the aircraft could put in an appearance July 4.

A BAE Systems spokeswoman played down that suggestion during a visit by reporters here on April 29, saying the only F-35 likely to be seen would be a full-size mock-up on the deck of the new carrier.

The two 65,000-ton aircraft carriers under construction will likely never achieve the iconic status of the Forth bridge, but they are the largest warships ever built here. In defense terms, they’re probably second only in terms of complexity to the Astute-class nuclear submarines being built by BAE Systems at Barrow in northern England.

For many in the Royal Navy — and the Aircraft Carrier Alliance partnership of BAE Systems, Babcock, Thales UK and the Defence Ministry — there will be a huge sigh of relief come July 4 that the program has reached such a key milestone.

Between them, the then-Labour Party administration and the current Conservative-led coalition government have delayed the program by two years, which increased cost, tried to cancel it entirely, and changed their minds twice over the type of F-35 they wanted to operate.

Industry has played its part in the program’s problems, too.

Costs have spiraled, leading last year to a renegotiation of the contract’s value to £6.2 billion (US $10.4 billion) from the starting figure of roughly £3.8 billion.

The warships are being built in modules weighing up to 11,000 tons at yards around the UK, and then floated here for welding together and completion of fitting out.

The first module for the Prince of Wales, the second ship, has already been delivered here, and more of the huge blocks will start arriving within days of the first carrier exiting the dock.

The current plan is for the Prince of Wales to be structurally complete by July 2016, sea trials to begin in January 2019 and acceptance in August that year.

Paul Rafferty, the Aircraft Carrier Alliance project management director, said the partners are looking at how they can pull forward those dates to save money.

Rafferty said the progress on the build program vindicated the decision to pull together a partnership to deliver the warships.

“It has been a success; without it. the project would have had a significantly different outcome,” he said.

It’s not yet clear whether the budget-restricted British military can afford to operate both aircraft carriers. At present, the plan is to operate one carrier and mothball or even sell the second.

Defence Secretary Philip Hammond said he favors having both ships available, but will leave the decision to a strategic defense and security review after next year’s general election.

For now, though, the attention is on the Queen Elizabeth as the ship starts to emerge from the cocoon of scaffolding and covers that obscure much of the completed structure.

The warship is not being traditionally launched here. But the assembly dock will be filled with water, or flooded up, in early July ahead of it being floated out a few days after the naming ceremony to another part of the yard for fitting out.

If things proceed to plan, which they often don’t, the Queen Elizabeth is expected to commence sea trials in August 2016 and be accepted by the Navy in May 2017.

The Royal Navy expects the ship to be fully operational with a complement of short takeoff, vertical-landing F-35B joint strike fighters, and Merlin anti-submarine warfare and Crows Nest airborne command-and-control helicopters in 2020.

The British government has already acquired a handful of F-35s for operational evaluation and training for Royal Navy and Royal Air Force crews who will fly and maintain the aircraft.

An order for the first batch of about 14 production aircraft is scheduled for this year.

Aviation trials are set to start with the Merlin anti-submarine warfare helicopter in 2017, followed in 2018 by the F-35B.

Other helicopter types such as the Chinook, Wildcat and Apache will be approved at some stage, as the military has an eye on using the carriers for joint air and littoral maneuver operations.

Rafferty said the plan is for the Queen Elizabeth to start F-35B trials with British aircraft stationed in the US.

“The current plan is for flight trials to start off the East Coast of the US in the fourth quarter of 2018 … Royal Navy F-35s have already conducted two sets of trials on the US Navy’s USS Wasp,” an amphibious assault ship, Rafferty said.