Home » News » T-34C crashes off Gulf of Mexico; no injuries

T-34C crashes off Gulf of Mexico; no injuries 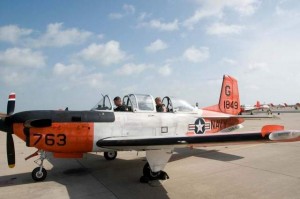 A T-34 Turbomentor similar to the one pictured above crashed into the Gulf of Mexico on Thursday morning. (Richard Stewart/Navy)

Two pilots aboard a training aircraft were uninjured Thursday morning after their plane crashed over the Gulf of Mexico, Naval Air Training Command said in a news release.

The aviators, assigned to Training Squadron 28 at Naval Station Corpus Christi, Texas, escaped the T-34 Turbomentor aircraft and were recovered by Coast Guard search and rescu

The pilots were flying a routine training mission over the inter-coastal waterway when they crashed around 10:20 a.m., central time. They are currently under evaluation at a local hospital.

The Navy will conduct an investigation into the cause of the crash, the release said.