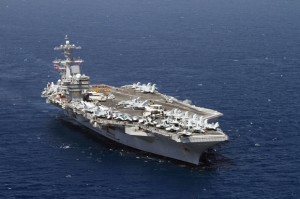 WASHINGTON — Extending deployments to compensate for a smaller carrier fleet would result in burnout of ships and sailors, the Navy’s top officer said Wednesday.

The Pentagon is considering retiring the USS George Washington if Congress doesn’t lift the budget caps that have been imposed on the Defense Department. Such a move would cut the carrier fleet from 11 to 10 ships.

“We need 11 [carriers] when you add [general combatant commander requirements] with the contingencies that we are tasked to respond to, in the time that we have to respond, and the capabilities that we have out there. I mean, it would be wonderful if we had a ‘doomsday device’ and magical things that could come off [fewer] carriers and flew further and be invisible, but we don’t have that now. We have what we have. And so when I look out into the future, we need at least 11 carriers,” he told reporters Wednesday.

Greenert said leaving the remaining carriers and their crews out at sea longer in an attempt to maintain the existing force presence with fewer ships could backfire.

“Some folks say, ‘Well, deployments will just be longer.’ I say not necessarily, [because] there’s a limit to that. There’s an optimal response that you can provide that would be to come back and you do maintenance and train again and go out there. And we have to take care of our sailors … and the equipment. So if you just turn the crank faster, for lack of a better term, in the cycle of deployment, the ship gets older faster [and] the uranium burns out faster [and] you don’t get [to keep the ship in service] for 50 years,” he said.

Greenert said the Navy would be forced to rethink the way it operates.

“We would have to change the way we do presence and the way we think about contingency response if we go to 10 aircraft carriers,” according to the service chief. “It’s either a [coverage] gap as you compare it to today, or you say you need to change the presence model and what you need where you need it.”

When asked whether a new Chinese anti-ship weapon — the DF-21D missile — might render carriers obsolete in the Pacific, Greenert said the U.S. is developing countermeasures to protect the prized vessels from the weapon that is sometimes referred to as a “carrier killer.”

“It’s a good weapon that they’ve developed. But there’s nothing that doesn’t have vulnerabilities, and we continue to pursue ideas in that regard. … We’re working quite feverishly on that, and I’m pretty comfortable with where we can operate our carriers,” Greenert said.

The Navy chief said the U.S. has “lots of intelligence” on the Chinese weapon, but wouldn’t elaborate, nor would he discuss what specific steps the military is taking to counter it.

In the future, Greenert said that new electromagnetic weapons, unmanned aircraft and other standoff weapons will help mitigate the threat of anti-ship missiles.