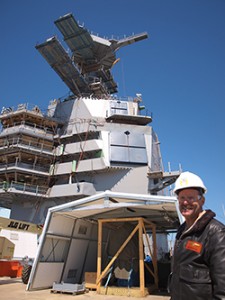 The U.S. Navy may change the radar suite for new Ford-class ships, says Rear Adm. Michael Manazir. Credit: Michael Fabey/AW&ST
A version of this article appears in the May 26 edition of Aviation Week & Space Technology.

When the next-generation aircraft carrier CVN 78 Gerald R. Ford takes to the seas later this decade, it will face one of the most dangerous threats to the U.S. maritime military behemoth—the Chinese DF-21 anti-ship ballistic missile (ASBM).

But U.S. Navy officials remain confident that the technological improvements to the Ford as well as the other ships shielding the carrier from attack should be able to protect the vessel.

The Chinese missile is based on the DF-21 (CSS-5) medium-range ballistic missile (MRBM) and gives China the capability to attack large ships—including aircraft carriers—in the western Pacific Ocean, with a range exceeding 1,500 km, or 810 nm.

“The DF-21D is a theater-range ballistic missile equipped with a maneuverable reentry vehicle (Marv) designed to hit moving ships at sea,” the Congressional Research Service (CRS) notes in a recent report.

“Observers have expressed strong concern about the DF‑21D, because such missiles, in combination with broad-area maritime surveillance and targeting systems, would permit China to attack aircraft carriers, other U.S. Navy ships, or ships of allied or partner navies operating in the Western Pacific,” CRS reports.

“The U.S. Navy has not previously faced a threat from highly accurate ballistic missiles capable of hitting moving ships at sea. For this reason, some observers have referred to the DF-21 as a game-changing weapon.”

But zeroing in on a carrier with such a missile is more difficult than it seems, says Rear Adm. Michael Manazir, director of air warfare.

Eyeing the Ford from the ship’s flight deck, he notes: “People think this is a big target. But they have to get to the carrier and then discern that it is a carrier.”

In addition, the U.S. Navy has a layered network of defensive systems.

“It’s a series of systems,” Manazir explains during a recent exclusive tour of the Ford at the Newport News Shipbuilding yard in the Tidewater part of Virginia. “We want to attack it on the left side of the kill chain.”

Getting to the Ford and its escort ships means also penetrating the carrier strike group, he says. “We use the air defense systems of the cruisers and destroyers to protect the carrier.”

The Ford also has some of its own protection, he points out, including the Rolling Airframe Missile (RAM), a close-in weapons system, as well as the Surface Electronic Warfare Improvement Program (Sewip) and MK 57 NATO Sea Sparrow missile.

The ship also will be sporting the Navy’s new dual-band radar (DBR), another major technology improvement for the Ford-class carrier that should help provide missile defense.

The admiral, though, acknowledges the Navy is reviewing whether it will continue using DBR for carriers after the Ford or use technological advances to develop a radar more appropriate for the ships.

“The DBR was initially designed for the [DDG-1000] Zumwalt [destroyer],” he notes. “The Zumwalt is a combatant.”

The question, he says, is whether the Navy and industry can use some of the scalable technology employed in the DBR to develop another dual-band suite of S- and X-band coverage that will be more suitable for operations aboard a carrier or amphibious ship.

Other technological advancements for the Ford-class ships provide the potential for more shields and weaponry.

For example, Manazir notes, the ship will have the kind of electrical power margins to make it possible to incorporate lasers or other energy weapons aboard the vessels.

The Ford’s electric power distribution grid kicks up about 13,800 volts, compared to about 4,160 for Nimitz-class carriers. Of course the ship needs more juice to power its DBR, Electromagnetic Aircraft Launch System (Emals) and other systems, but the design allows for even greater capacity.

“If you go to a more electric-centric ship, you have to have big electrical potential,” Manazir says. “The Ford was designed with a 60 percent increase in capacity.”

For Nimitz-class ships, he says, any new technological improvements that require more electricity would mean power-supply redesigns to accommodate the upgrades.

“With Ford,” he says, “it’s already designed into the ship.”