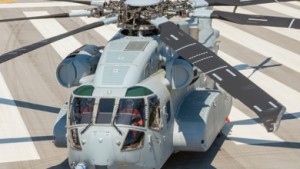 One look at the massive steel columns anchoring the CH-53K to the ground here at Sikorsky’s development test center makes clear the sheer power of this heavy-lift helicopter, which has more than three times the lifting capability of the aircraft it will replace.

Rotor blades began turning on the ground-test vehicle (GTV) on April 17 and the first of four YCH-53K flight-test aircraft will be rolled out formally on May 5. First flight is planned for late this year. After a slow start that saw the program rebaselined and initial operational capability pushed back to 2019 from 2015, the U.S. Marine Corps’ heavy-lift helicopter replacement is gaining momentum.

Although it resembles the CH-53E it will replace, the CH-53K is an all-new aircraft. The helicopter still has to fit the same ships and be air-transportable by the Lockheed C-5 and Boeing C-17, but the requirement for greater hot-and-high lifting capacity, increased survivability and supportability, and improved affordability drove the new design, says Mike Torok, CH-53K program vice president.

In an industry dominated by upgrades to existing designs, the CH-53K is the U.S.’s largest new-rotorcraft program, with the Marine Corps planning procurement of 200 helicopters. Sikorsky was awarded the system development and demonstration contract, now worth $3.5 billion, in April 2006. “We had a slow start early in the program so we rebaselined, and are holding with that schedule,” says Col. Robert Pridgen, Marine Corps program manager for heavy-lift helicopters.

“There are no significant technical issues, nothing without a clear path to being resolved,” says Torok. “Where there are challenges, we have technical solutions that we are implementing. And we are managing cost consistent with the budget.” Pentagon-wide spending cuts have impacted the program, “but we have traded off when things are done to create our own runway,” says Pridgen.

“Bare-head light-off” of the GTV in December-—in which the rotor hubs were turning without blades—marked the beginning of the transition from component qualification to full-aircraft testing. It took longer than expected to achieve “shakedown light-off,” with blades installed, because of “discoveries” during initial runs, but the GTV has now embarked on 200 hr. of ground testing that will clear the way for first flight.

The key performance requirement for the new helicopter is to lift a 27,000-lb. external payload 110 nm in high/hot conditions (3,000 ft./91.5F). As the diameter of the seven-blade main rotor is the same as the CH-53E’s, at 79 ft., the additional lifting capacity comes from aerodynamic improvements to the blades and increased power to drive the rotor from the three 7,500-shp GE38-1B turboshafts.

“The extra lift is basically aerodynamic performance,” says Torok. “We are saying it has three times the lift of the E, but there is margin built into our performance calculations. If we apply that margin to the E, the CH-53K has closer to four times the lift capability.”

Outside width is 5-6 in. less because the enlarged sponsons carry the same amount of fuel as the sponsons and “bat wing” auxiliary tanks on the CH-53E. Self-contained and bolted on, each sponson houses two self-sealing bag tanks holding 2,300 gal. of fuel, for a total of 15,500 lb.

The fuselage has titanium frames under the gearbox to carry the lift loads, but all skins and beams are carbon-fiber composite for lower weight. The cockpit, cabin and tailboom are manufactured by Spirit AeroSystems, aft transition section by GKN Aerospace, sponsons and tailrotor pylon by Exelis and main rotor pylon by Aurora Flight Sciences. Development and initial production aircraft are being assembled at West Palm Beach. Sikorsky has yet to name the eventual location for final assembly.

The critical technologies that drive the CH-53K program are the rotor system, split-torque transmission and fly-by-wire controls. “The balance is state of the art, and the challenge is integration,” says Torok.

Oil bearings in the CH-53E’s main rotor hub are a major driver of maintenance costs, so the CH-53K has an elastomeric hub developed from that used on Sikorsky’s S-92. Made from layers of elastomer and metal, the fail-safe bearings accommodate blade lead, lag, flap and pitch movement without requiring lubrication.

The “fourth-generation” composite blades have a wider chord, new airfoils, twist, taper and tip shape optimized to increase performance in hover and forward flight. The main rotor has automatic blade fold. The tail rotor is 20 ft. in diameter, generating the same thrust as an S-76 main rotor, with four individual blades attached to the hub via flexbeams; stiff torque tubes transmit pitch changes to the blades.

Scaling up the CH-53E’s planetary gearbox design to the power levels required for the CH-53K would have resulted in a main transmission that was too heavy to fly, says Torok, so Sikorsky went to a split-torque design originally developed for the RAH-66 Comanche. “The new design keeps high speeds longer, and splits the loads, so it has redundancy and lighter parts,” he says. With a 19,000-shp. design capacity, the gearbox has a 30-min. run-dry capability.

The transmission has three input modules, each of which takes the power from one engine and divides it between four shafts that drive the output gear turning the main rotor. Each of these quill shafts is flexible in torsion to accommodate small differences in loads. “The transmission self-balances,” says Torok. This reduces the maximum load any one shaft must be able to carry to 103% torque, versus 120% if the shafts were rigid, which also lowers weight.

The latest in a line of FBW rotorcraft developed by Sikorsky that includes an S-92 demonstrator, CH-148 Cyclone maritime helicopter and upgraded UH-60MU Black Hawk, the CH-53K introduces sidestick cyclic controllers with tactile cueing. The goal is to improve on the CH-53E’s handing qualities and provide stability and control in degraded visual environments with enhanced FBW modes including autolanding, Torok says.

The glass cockpit is a derivative of Rockwell Collins’s Common Avionics Architecture System, used in the special-operations MH-60M, with five liquid-crystal flight displays. Where the CH-53E has been retrofitted with a health and usage monitoring system (HUMS), the CH-53K has a more-comprehensive installation aimed at improving fault detection and isolation so as to reduce the  unwarranted removals that are a driver of maintenance costs.

The ground-test vehicle is putting all these systems and their integration through their paces ahead of first flight. “The GTV is a step improvement over previous programs,” says Torok. “It is an aircraft—an exact duplicate of the flight-test aircraft—with full-up cockpit, mission system, data concentrator, hydraulics, controls, rotor brake, etc.” A handful of equipment is not on the GTV because it is not required, he says, including a refueling probe and directed infrared countermeasures system.

The purpose of the GTV is to find and fix things before flight testing begins. “The sooner we find anything, the quicker we can fix it,” he says. Ground runs are planned and executed as if they were flight tests, with a crew on board, a test card and data being transmitted to the control room in real time. The steel columns that pass through the cabin floor and anchor the GTV to its concrete pad are attached to the gearbox mountings to carry the lift loads from the massive rotor as it spins.

The plan for the GTV is to complete 100 hr. of shakedown testing, bringing on systems one at a time and checking their integration. This is to be followed by 50 hr. of dedicated rotor testing to measure thrust and balance. A final 50 hr. of pre-flight acceptance tests—five runs each lasting 10 hr.—is required to clear the new helicopter for its first flight. GTV testing will continue, with a total of 800 hr. planned, including blade- and tail-fold endurance evaluation and maintenance demonstrations.

Sikorsky is finalizing assembly of the four YCH-53K engineering development models. Because of development issues encountered with the main gearbox, the flight order has been changed. While EDM-1 waited for a flightworthy gearbox, EDM-2 was first to be delivered, but with a ground-test gearbox. This is sufficient to enable overspeed testing to check for driveshaft vibration during autorotation, and ground-resonance and shake testing ahead of first flight.

EDM-1 will be first to fly, followed by EDM-3, then EDM-2 and finally EDM-4. Each is expected to complete around 500 hr. of flying. A static test article has begun trials in Connecticut. The fatigue test article is complete and in storage, with lead-the-fleet testing to begin once flight data has been collected.

Sikorsky received a $435 million contract in 2013 for four system demonstration test articles, production-representative CH-53Ks for operational evaluation. Final assembly will begin late this year at West Palm Beach, for delivery in 2016-17. There are four positions on the final assembly line here. At Station 4, the cockpit, cabin and tail from Spirit are stuffed with systems, and the sponsons are attached and landing gear installed. At Station 3, the main rotor pylon is fitted, hydraulic and fuel systems are installed and power turned on. At Station 2, the drive system, avionics and 13 ft.-dia., 4,650-lb. rotor hub quick-change assembly are installed. Station 1 conducts check-out tests and installs the pylon fairings ready for roll-out.

Planning for the first flight is underway already, using the engineering flight simulator and system integration laboratory. “We are doing dry runs for all testing, to get the crew coordination ready,” says Torok. In addition to completing 200 hr. on the GTV, before it can fly the CH-53K Sikorsky must also obtain flight clearance on all of the gearboxes, with the main transmission still to complete rigorous preliminary military qualification testing and less-severe qualification testing of the final production configuration.

Although designed around the principal external-lift mission of today’s CH-53E, Sikorsky suspects the increased capability could lead to new ways of using heavy-lift helicopters—particularly the ability to transfer cargo pallets directly to the CH-53K from intra-theater airlifters. “With the pallets and three hooks, it’s about throughput—how quickly you can get a large amount of materiel in the right place at the right time,” says Torok. “I think there will be a gee-whizz effect on logistics.”

But, for now, the Marine Corps is curbing its appetite for more and keeping the requirements stable for the sake of affordability. “When we went into design, we looked at future growth, but did not want to add too much upfront. I think we struck a good balance,” says Pridgen. “We started out with the whole idea of affordability and not paying lip service at the beginning.”

Acknowledging that the CH-53E “is a very expensive aircraft to fly,” Pridgen says supportability is key for the CH-53K. The Marine Corps has established the Fleet Common Operating Environment (FCOE) to reduce ownership cost. Modeled on Sikorsky’s S-92 fleet management operations center, the FCOE collects and analyzes aircraft data to enable predictive maintenance decisions. The capability was established at the end of 2012, initially using data from the CH-53E HUMS, and will be expanded for the CH-53K.