Home » News » Out of fuel, out of time and one chance to land

Out of fuel, out of time and one chance to land 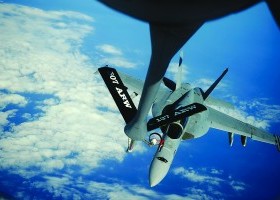 A KC-135 Stratotanker delivers fuel to an F/A-18F Super Hornet assigned to the Black Knights of Strike Fighter Squadron 154 supporting Rim of the Pacific exercises in 2010. This photo was used for illustrative purposes and is the type of Super Hornet that crashed in 2013. (U.S. Air Force file photo)

By Mike Hixenbaugh
The Virginian-Pilot

The aircraft carrier Dwight D. Eisenhower was finally in sight.

The pilot of the F/A-18 Super Hornet hurriedly flipped switches and pushed levers. The aviator in the backseat leaned forward, straining to see the flight deck floating in the distance. The jet’s right engine had locked up, its landing gear had jammed, and the main fuel tank was almost empty.

At nearly 350 mph, the Super Hornet hurtled over the warm waters of the North Arabian Sea last April. The pilot had made some tough decisions that day; several hadn’t gone his way.

Now he was out of options. He had one chance to land.

The two-seat Super Hornet had launched off the Eisenhower’s flight deck 5-1/2 hours earlier. It was one of several jets from Virginia Beach-based Strike Fighter Squadron 103 tasked with providing close air support – a show of aerial force – to aid troops on the ground in Afghanistan.

The pilot guided the jet through dark rain clouds over Pakistan. After escaping the storm system, he moved toward a KC-135 Stratotanker, an Air Force fuel plane in the skies of Afghanistan.

The 600-mile flight from the Arabian Sea – a familiar journey for Navy fighter pilots after more than a decade of war – requires that Super Hornets make at least two midair refuelings.

With the flip of a switch, the pilot extended a refueling probe from the jet’s nose. He moved into position behind the tanker, toward a fuel line that dangles behind it. The pilot carefully steered the probe into a basket at the end of the fuel line.

The midair connection was a success; jet fuel began flowing into the Super Hornet’s tanks. After eight minutes, it had taken in about 14,800 pounds of fuel.

Suddenly, they hit unexpected turbulence. The fuel line rippled violently and wrapped itself around the basket and probe.

The pilot eased up on the throttle to back out of the connection. Instead, the hose detached from the basket and began spewing fuel.

Gas streamed into the fighter jet’s right engine intake. Worse, the fuel basket was stuck on the probe, meaning it could no longer be retracted. The jet – flying over a war zone, hundreds of miles from its home ship – would not be able to refuel again in the air.

The mission had abruptly changed for aircraft No. 206: Now, it was about getting home.

A warning tone sounded, and caution lights lit up the cockpit. Sensors told the pilot something was wrong with the right engine, which had ingested the fuel.

The pilot made some quick calculations.

He had 15,500 pounds of fuel in his tanks, enough to return to the Eisenhower and make six passes at the ship.

Landing in nearby Kandahar was a more prudent option, but that likely would have meant several days or more awaiting repairs. The Eisenhower’s air wing commander had decided earlier not to put a maintenance detachment in Afghanistan – a cost-saving measure that pilots perceived as a signal they should attempt to divert back to the ship whenever possible.

The pilot and his backseat weapons-systems officer agreed: The situation wasn’t serious enough to land immediately.

They broke away from the group to begin the long return to the Eisenhower.

By the time they realized much of their fuel was unusable, it would be too late to reverse course and land in Kandahar.

The jet had flown more than 400 miles, two-thirds of the way back to the carrier, when the aviators noticed another problem.

The pumps that move fuel from reserve tanks on the wings into the main tanks are automatically disabled when the refueling probe is extended.

The pilot had been staring at that probe and the attached basket for more than an hour but failed to realize its effect on the fuel pumps. He knew the hulking metal contraption sticking up from the nose of the jet was putting extra drag on the aircraft, causing it to burn more fuel; he figured the 3,000 pounds of gas in the wing tanks would more than make up for it.

The aviators didn’t panic when they realized that the fuel pumps weren’t running. The pilot would try to use gravity to move the gas.

He began “slipping and cross controlling” the aircraft – a maneuver to tilt a wing up a few degrees while still flying straight. Alternating the tilt should move fuel from the wing tanks. But the maneuver also burns more fuel.

They didn’t know it yet, but even with the tilt, not enough gas was flowing.

The Super Hornet was about 140 miles from the ship – most of the way home – when a voice from the Ike’s tower crackled over the radio with a question: “What would you call your usable fuel?”

“Thirty-seven-hundred pounds if no additional fuel transferred from the wings,” the pilot replied, then let his own words sink in. He had been counting on at least 4,500 pounds, but more than 1,000 pounds of fuel remained in the wings. Only about 10 or 20 pounds was transferring each minute.

It was at that moment, the pilot would later tell an investigator, that he first realized they were in serious danger.

Seconds later, the voice of Rear Adm. Michael Gilday broke into the conversation. The commander of the Eisenhower carrier strike group had been monitoring radio chatter. He had heard enough.

“I want you to send 206 to Masirah right now,” Gilday said, referring to the jet and an airfield in Oman.

Attempting to land a jet on a moving aircraft carrier is difficult under the best conditions; having a damaged plane attempt it with limited fuel would be too risky, Gilday would say later. If the pilot failed to land on the first pass, he wouldn’t have enough fuel to divert to shore, Gilday said, calling it a “Hail Mary.”

The Super Hornet, now just 11 miles from the Eisenhower, turned toward Masirah, more than 280 miles away.

The right engine – the one that had been showered with jet fuel – had abruptly stopped working.

The pilot radioed the carrier. The officer in the tower told him to jettison an empty fuel tank, then walked him through emergency procedures.

The engine was locked up and wouldn’t restart. With just one engine and 1,400 pounds of usable fuel, landing in Masirah was no longer an option. The tower ordered the pilot to turn back toward the Eisenhower, 46 miles away at that point.

The pilot made the turn. He continued dipping the wings, hoping to capture fuel from the reserve tanks.

Then, without telling his backseater or the ship, the pilot made a fateful decision: He engaged the plane’s auxiliary power unit in a desperate attempt to restart the right engine.

The engine didn’t crank. Without realizing it – as the ship came into view on the horizon – the pilot had drained the sole source of reserve power he needed to lower his landing gear.

The officer in the tower read instructions over the radio for an emergency, single-engine landing. Without the right engine turning to power the hydraulics, the plane would have to use auxiliary power to put down the landing gear, the officer said, unaware that the pilot had already depleted it.

The pilot followed instructions and pulled the landing-gear handle, but the wheels didn’t come down.

The jet was 11 miles from the ship.

The tower told the pilot to remove and reinsert the circuit breakers, but the trick failed to restore auxiliary power. Then it told him to try once more to restart the right engine. No luck.

The pilot frantically repeated all the emergency procedures and pulled again on the landing-gear handle. This time the nose wheel came down, but the two in the back didn’t.

He checked his fuel gauges. Just 700 pounds of fuel left in the main tank. Every second mattered now.

The tower officer had one last idea.

He told the pilot to accelerate to 350 mph, hoping the speed would cause the right engine to rotate in the wind and provide enough hydraulic power to drop the back wheels.

The pilot pushed the throttle: the left engine roared, the right began to rotate slowly.

Finally, the landing gear popped out.

“Three down and locked,” the pilot radioed, and immediately prepared to land.

A landing signal officer on the flight deck told the pilot he was coming in high but was lined up to land.

There was no room for error; this would be their one shot.

The jet was less than 2 miles from the ship when it ran out of fuel.

The left engine flamed out without much warning. The digital cockpit displays went dark. The $41 million fighter jet nosed downward, rolled right and began to fall from 1,200 feet.

The backseat aviator, unaware the pilot had lost control, leaned forward to see how far away the ship was. Suddenly a violent thrust blew him into the sky. The pilot had pulled the ejection handle without giving him a warning.

The jet – with nearly 2,000 pounds of fuel trapped inside – plunged into the sea. Both aviators blacked out, hanging limp below parachute canopies, before hitting the water and coming to.

Disoriented and bleeding after the ejections, the men cut themselves free from their chutes.

The rescue helicopter arrived quickly. It returned them, finally, to the Eisenhower’s flight deck.

About the story: This report was based on an investigation into the April 8, 2013, crash of an F/A-18 Super Hornet. Names and other identifying details were redacted from the report, which was obtained by The Virginian-Pilot through a Freedom of Information Act request. The report cited questionable decision-making by the pilot but did not recommend disciplinary action.