Naval aviators plan to fly the F-35 Joint Strike Fighter from an aircraft
carrier at sea this fall. Pilots who have operated the aircraft say they are
cautiously optimistic about its future despite a string of technical
setbacks.

During carrier tests scheduled for October, officials will have
an opportunity to examine the performance of the airplane following a recent
redesign of the arresting hook that catches the airplane when it lands on the
carrier deck. Aviation commanders also hope the tests will provide early answers
to questions about the role of the F-35C as part of an air wing.

The
F-35C faces several more years of tests before it is ready to join carrier air
wings. Whereas the Marine Corps is determined to start operations with its
vertical-takeoff F-35B as early as 2016, the Navy is in less of a hurry. At the
earliest, the Navy has said the F-35C would be operational in 2019, although
that goal appears to be in flux.

“We are only half way through the
initial development plan,” says Navy Lt. Cmdr. Michael Burks, a test pilot with
150 hours in the cockpit of the F-35C and B.

Flight tests are planned
through 2017, and operational-level trials would begin later.  The $400 billion
Joint Strike Fighter program includes three variants: one for the Air Force, one
for the Marine Corps and one for the Navy.

The priorities for the Navy’s
F-35C are to finish software development and to fix glitches in the
helmet-mounted displays, Burks says during a recent industry conference in San
Diego. Then the Navy will have to decide how to incorporate the F-35C into an
already crowded air wing.

“There will be some challenges integrating the
F-35 on the carrier. Most have been identified,” he says. A carrier air wing
typically has anywhere from 44 to 54 fighter jets. The Navy expects that for the
foreseeable future, most of the fighters in the air wing will be Super Hornets,
and that the F-35C will have a niche role as an airborne intelligence nerve
center.

The F-35C will be predominantly an “information collector and
distributor in the air wing,” says Burks. As the Navy’s only “stealth” aircraft
that can fly undetected by radar, it will be prepared to “go alone into highly
contested areas,” he adds. But most of the time it will serve as the hub of a
“network centric” air wing.

“It may not matter what weapon we have on
board,” Burks says.  F-35 pilots will pass information over the network that
would allow other aircraft to engage targets. “I may pull the trigger in the
cockpit but the weapon may come from a different platform,” he
explains.

Routine aircraft operations and maintenance aboard the carrier
will change dramatically when the F-35C joins the fleet, says Burks. The
high-tech materials that give the F-35 stealth properties require special care.
“There will have to be a paradigm shift … in the grimy flight deck environment,”
he says. “Maintainers are going to have to come into the 21st century when it
comes to maintaining these technologies,” says Burks. “No longer can we allow
our aircraft to get grubby and grimy from wear and tear, and wash them once a
month. They will require daily support, the effort of the entire squadron,
especially on cruise,” he says. “That’s different from the current mindset when
we let the airplanes get dirty because of the operational environment.” In test
squadrons, aircraft are kept indoors and in hangars, so maintenance problems at
sea have yet to be experienced.

Another issue will be coping with louder
than usual engines. “It is a very noisy jet,” Burks says of the F-35C. “We are
looking at having to use noise-cancellation headsets for maintainers” and other
operators.

The Pentagon’s Director of Test and Evaluation Michael
Gilmore says in his 2014 annual report that engine noise is a “potential risk to
personnel on the flight deck and one level below the flight deck.” Projected
noise levels one level below the flight deck will require at least single
hearing protection, he says. On most carriers this is a berthing area, but on
the new carrier CVN-78 this is a mission planning space, Gilmore says.
“Personnel wearing hearing protection in mission planning areas will find it
difficult to perform their duties.”

A more significant concern is the
performance of the redesigned tail hook, which has been tested six times so far.
“It’s a bit early to say we have definitely nailed this problem,” says Burks.
“The tail hook has been a major issue for the development of this airplane. It
was unexpected until it was discovered in 2011.” The first problem was not being
able to catch the arresting wire. There was also a structural flaw that caused
excessive stress to the bulkhead where the tail hook attaches to the airframe.
The redesign took a year and a half. Manufacturer Lockheed Martin Corp. has so
far delivered one F-35C with the new tail hook at the Navy’s test site at
Patuxent River, Md.

Gilmore says the arresting hook system “remains an
integration risk as the JSF development schedule leaves no time for new
discoveries.” He cautions about the “potential for gouging of the flight deck
after a missed cable engagement due to an increase in weight of 139 pounds and
the potential for sparking from the tail hook across the flight deck because of
the increased weight and sharper geometry of the redesigned hook.”

One of
the most anticipated features of the F-35C is an automated landing system called
“delta flight path” that would take the pressure off aviators to nail landings
on moving ships. “The delta flight path for the F-35C will make carrier landing
so easy,” Burks says. “It will be a new era of carrier aviation. … Night
landings will not be the number one task to focus on.” The system has been
tested ashore but has yet to be tried at sea.

The glitches of the
$500,000 F-35 pilot helmet have been well documented, but problems have yet to
be fixed. Having a helmet-mounted display is central to how air warfare will be
conduced with the F-35 because it eliminates the heads-up display in the
cockpit, and everything is projected on the visor of the helmet.

“When
it gets to the fleet and it’s working right, it will provide a great
capability,” says Burks. It would allow for a smooth transition from day to
night, with no need for night vision goggles. The pilot would have a 360-degree
view of his surroundings from the cameras around the aircraft. The helmet,
though, has been plagued by the jitters. When the display is fixed to the
aircraft, it is easy for the human eye to compensate for head motion. “It so
happens now that your head is bobbing around when you’re pulling G’s, it’s not
quite as easy to stabilize the symbology on the visor,” he says. “We’ve been
through many fixes.” The contractor built a tiny electronic device to sense
aircraft vibration and buffeting. “It turns on filters in different regimes of
flight to filter out the noise we’re seeing in the display,” says Burks.

The redesigned helmet is now undergoing tests. The helmet’s night camera
also will require major changes. “It continues to be a show stopper at night,”
he says. One problem is that it leaks light at night when the pilot is trying to
dim the display down. “You get a lot of leakage of light in the optics around
the eyes. It’s distracting,” says Burks. He predicts the transition from cockpit
to helmet-mounted displays will be hard for most pilots. “It took me about 50
flying hours to adjust.”

William Gigliotti, F-35 test pilot at Lockheed
Martin Corp., says glitches are to be expected in any major weapon development.
During a panel discussion at the Navy’s West 2014 conference in San Diego,
Gigliotti suggests that “nits” in the F-35 program get blown out of proportion.
“It’s the most scrutinized program around,” he says. “We can’t afford to hide
anything.”
Being in the middle of the flight test program, he says, “our job
is to stress the aircraft, find problems and fix them.”

He says Lockheed
engineers have come up with novel ideas for how to maintain sensitive stealth
aircraft at sea. “When we go to the carrier this year, we have to see the normal
wear and tear.”

A potential weakness of the F-35 is not the aircraft but
its weapons, Gigliotti says. He worries about future conflicts where U.S.
aviators may have to engage in dogfights against well-equipped enemies. “We have
air-to-air missiles. But it’s important we acknowledge that in the United States
we need a new AIM 120,” he says referring to the newest air-to-air weapon used
by the U.S. military. “We need a longer range air-to-air weapon. … As an
industry, we need to get active in supplying a longer and more kinematic
air-to-air weapon,” Gigliotti says. “That is a current limitation under some
scenarios. … It is the Achilles’ heel across the U.S. Fighter fleet. We need
better kinematics.”

The Pentagon plans to buy nearly 100 F-35s of the
three variants by 2018. When the program’s schedule collapsed in 2009 and its
costs started to soar, Pentagon officials halted development and directed all
branches of the military to beef up the testing program to ensure problems were
fixed before more airframes were produced.

The projected price tag of
$391.2 billion for an eventual fleet of 2,443 F-35s is a 68 percent increase
from the estimate in 2001. The officer in charge of the F-35, Air Force Lt. Gen.
Christopher Bogdan, says in a 60 Minutes interview that the price tag of at
least $115 million per aircraft is too high, but the Pentagon intends to stick
with the plan. “I don’t see any scenario where we’re walking back away from this
program.” 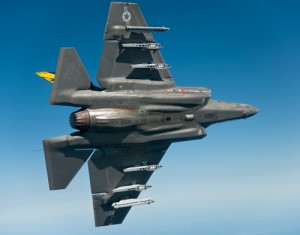