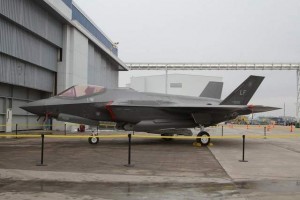 FORT WORTH, TEXAS — The one hundredth production F-35 Lightning II Strike Fighter was unveiled to more than 2,000 employees and invited guests during a ceremony at Air Force Plant No.4 here today.

The aircraft, AF-41, is the 41st F-35A Conventional Take Off & Landing variant for the US Air Force and will be the first to be delivered to the 56th Fighter Wing at Luke Air Force Base, Ariz., early in 2015. It will be used to train pilots from the United States and international partner nations.

Luke is set to become the largest F-35 base in the United States and contributes an estimated $2 billion to the local economy.

“The inauguration of this 100th aircraft is an important occasion here today for many reasons, as we continue to deliver aircraft to our international partners,” said Orlando Carvalho, Lockheed Martin Aeronautics EVP.

“It demonstrates maturity, progress and commitment to the program, with one hundred jets coming off the production line and another 90 aircraft in various stages of production, the F-35 program is quickly approaching the threshold of significant growth. Make no mistake, the F-35 is real; it is here; it is flying and every day it has demonstrated its unmatched agility, its versatility, its interoperability and its unprecedented situational awareness.”

AF-41 is the first of 144 F-35s scheduled for delivery to Luke under an Air Force plan announced last June to increase the number of based squadrons to six, with training to begin in 2015. The number will include aircraft from international partners such as Australia, who will place two aircraft under the command of the 56th Fighter Wing in January 2015.

The 56th Fighter Wing will report to Air Education and Training Command, which also oversees F-35 training at the 33rd Fighter Wing at Eglin Air Force Base, Fla. Since the first F-35 was delivered to Eglin in March 2012, 43 US pilots have been trained and there are 17 aircraft on line, including two Dutch F-35As.

“There is nothing average about this aircraft. The F-35 Lightning II will deliver warfighting capabilities essential to the security of our nation and it will maintain our Air Force’s ability to employ lethal force against an array of robust 21st Century threats,” said Commander AE&TC Gen. Robin Rand.

“The completion of AF-41 represents a new chapter in the cooperative relationship between Lockheed Martin and the United States Air Force. Luke is the perfect place to train US and partner nations’ air force pilots, but make no mistake, this will not be an easy task: there is much work to be done and challenges are looming just around the corner.”

Speaking with reporters shortly after the ceremony, Steve O’Bryan, vice president of F-35 program integration and business development, said he saw three opportunities for firm commitments in the next year, as Turkey, Canada and South Korea move closer to their decisions on new fighters.

“Turkey will vote in early January to buy their first jets in LRIP 9, their program of record is for 100 jets to replace their F-4s. Singapore Ministry of Defense personnel were recently at Luke and we’re supporting them through their evaluation and we look forward to their decision,” O’Bryan said

“What’s next? Belgium is now talking about an F-16 replacement and we look forward to supporting that desire and provide those options to them, with the US Government.”

In addition, O’Bryan said further near-term opportunities exist in Denmark and Israel, with the former due to issue an RFP to industry for an F-16 replacement next year. A decision is due to be made in 2015 for deliveries beginning in 2020. Israel is reported to be evaluating the purchase of a second squadron of aircraft in addition to the nineteen under contract in LRIP 8, 9 & 10 and has previously indicated a requirement for 75 aircraft.