The Ford-Class Carrier, The F-35C and ‘Spider Web’ War At Sea 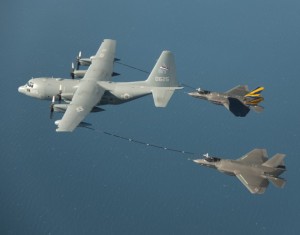 An aircraft carrier is nothing without aircraft, and a Navy aircraft is worth little without a carrier. It’s ships and planes in synergy that revolutionized war at sea in the 1930s and with new systems now entering service – the F-35C Joint Strike Fighter and the Ford-class carrier – they can do it again. On April 30, we sat down with Rear Admiral Bill Moran, the Director of Air Warfare on the Navy staff (OPNAV N98) and co-author of a recent article on future carriers, to discuss the transition to the Ford and JSF. While the new carrier can still perform its traditional role as the centerpiece of a mobile island of concentrated naval force, Moran said, the Ford class, the evolving air wing, and an array of other new capabilities will allow the carrier to play a much more flexible and distributed role. 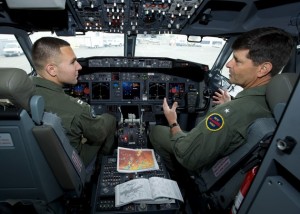 Question: When we visited San Diego a couple of years ago, the naval aviators we talked to were focused on the transitions which were underway. For example, Captain [Kent David] Whalen, now the commander of the USS Carl Vinson, underscored that the Navy was facing an across the board transition.

Rear Admiral Moran: We are the midst of a significant transition in Naval aviation. We are working it hard inside the building and in concert with the fleet and that is one reason why we’ve had our heads down and not as vocal as one might expect.

We largely took a procurement holiday with regard to naval air platforms in the mid 1990s. When one is buying aircraft, typically you are looking at a 20-25 year service life. If you are buying in peaks, you are then going to have valleys.

Because of the mid-1990s procurement holiday, we are now in the midst of replacing several legacy platforms across the fleet.

We will be done with all our helicopter transitions by 2016. We will be done with the F-18Es, Fs and G’s along with the P-8 by the end of the decade. We will be on a steady ramp on E-2D because it is not a volume aircraft. In effect, in the foreseeable future, we will only be buying the F-35C as our advanced aircraft system. These are the aircraft that will make up the carrier air wing for the next 20-plus years.

This means that in 20 years we will face a new build cycle to add replacement aircraft or air systems to replace current capability. This [also] means that the air wing that will go onto the Ford, for example, will provide a key foundation to shape an understanding of what comes next. 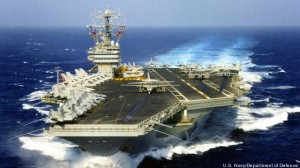 Question: Your focus on cycles of innovation can be misunderstood. When you are talking about where you might wish to be in 2030, some might see this as an unhappiness with the trend lines which you are already have set in place. Could you give us your thoughts on this challenge of how to present future technologies alongside current evolutions?

Moran: We are looking at a number of evolving technological developments and options to shape the naval air wing after next. Unfortunately, some people misunderstand this approach and think we are looking at future technologies to displace what we are buying now, including the F-35 in the near term. In fact it is just the opposite.

We are going to operationally shape our understanding of the evolving air wing, notably as the F-35 enters the fleet, and build from that to the air wing after next.

The CNO has highlighted the role of payloads in shaping the kinds of platforms we are buying and likely to develop and buy.

We think that in Naval aviation we are building out in that manner with the new Gerald R. Ford class of carriers (future platform) married with evolving air wing capabilities (payloads).

Another good example is the new P-8 Poseidon, which was design built from a commercial airframe. We then put architecture in the airplane to allow growth in terms of what capability will fit into that airplane in the future. This kind of “truck” and “payload” construct buys us time to evolve capability, whether it’s weapons or sensors or communications gear that are more easily integrated into the backbone of that airplane.

When we think of strike fighters for the carrier wing after next, shaping a combat truck in effect will play a role. It might be a truck that has a common architecture, a backbone to it that you can plug and play different capability sensors, weapons, comms, and that will drive design and it will drive propulsion.

It will also have the reach and reach back to operate in multiple environments and will have payloads on it that will enable future weapons that we see that are smarter, more precise, and will be a bit unpredictable for potential adversaries, whoever they might be. 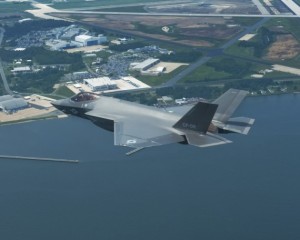 Question: You will also have the opportunity from the standpoint of 2030 to take advantage of understanding what the impact of the F-35 will be on the fleet.

Moran: Absolutely. That is a good point.

Joint Strike Fighter in my view is a revolutionary change to how we’re going to operate.

And we will evolve joint strike fighter once we get it in our hands and we learn to operate with it, and we truly understand its full potential. Once we get it out there and we start operating, we’re going to find out that we’re going to want to evolve this capability.

And the F-35 may be its own successor.

Point being, we do not need to make a decision on the future as of yet, because much will depend on the operational experience we gain with the new air wing, as well as a close look at the evolution of technologies, such as propulsion.

The mix of aircraft and capability is a key part of our discussion going forward in the future, especially on what the air wing after next might look like. 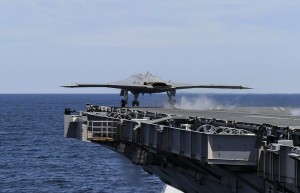 May 14, 2013: The Navy’s X-47B drone becomes the first unmanned aircraft to launch from an aircraft carrier.

The Future of UAVs

Question: There are frequent comments to the effect that it is the end of the manned aircraft era and we will see the dominance of the unmanned. But one could note thatUAVs really are simply data links in the air and are extremely vulnerable in many ways. That said, clearly robotics is a key part of the evolution of what will shape the future of what is on the carrier deck.

Moran: They are called unmanned systems, but clearly they are not [truly unmanned] today. There is significant support necessary to operate the systems, and the man in the loop is crucial to execute an effective mission. Where you would like to go is to launch a system so it could operate autonomously within the rules of operation and engagement you have pre-set.

We clearly are not there yet. What we get for now from so-called unmanned systems is persistence. There is a clear value in the persistent capability for the ISR mission of UAVs.

Information security and control is crucial as well.

If I launch it, can I turn it back? Can I prevent it from doing something when the information changes between the time I launch it and the time it arrives? 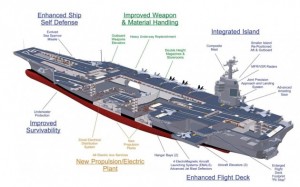 The Coming of the USS Ford

Question: You have been talking about the evolution of the air wing, but you clearly have in mind that the new large deck carrier will be part of the re-shaping of what that air wing can be used for. Could you talk about your understanding of the Ford and its capabilities?

Moran: Because it’s an “electrified” platform — it’s no longer predominantly steam and hydraulics and all of the things that are traditional parts of the Nimitz-class carriers — we’ve replaced a lot of that with electrical capability because of improved power generation coming out of a newly designed nuclear power plant.

It’s a generational leap in capability in terms of generated power.

Ford will generate three times the electrical power of a Nimitz class carrier. And with that you can electrify the ship and you can automate the ship, add the most powerful and advanced radar system in the Navy and then when you want to put things on the ship, new capabilities in the future that we can’t even think of today, whether it’s a hypersonic capability that’s unmanned, directed energy weapons, or whatever it is, we do know is it’s got to be able to plug in. It’s got to fit in somehow. And, it’s going to need power.

With a ship that is in effect a 21st century infrastructure for 21st century systems, we will be able to do that.

Whatever we invent, whatever we want to put on this truck in the future, it is going to be able to incorporate it in a way that the current configuration cannot.

We have also reduced the crew size and designed the ship for reduced maintenance, thereby reducing operational costs over its lifetime by four billion dollars.

It’s cleaned up significantly. We’ve developed in effect a pit crew concept where there’s enough room when an airplane lands that you can pull it off into the pit and reconfigure it, whether it’s sensors or weapons, and gas it, and put it right back out on the deck and launch it.

Question: You are describing a carrier which can operate much more flexibly than a traditional carrier, and one which can become a central piece in a combat “spider web,” rather than operating at the center of a concentrated force. Could you talk to the con-ops piece of this?

Moran: The Ford will be very flexible and can support force concentration or distribution. And it can operate as a flagship for a distributed force as well and tailored to the mission set.

When combined with the potential of the F-35, Ford will be able to handle information and communications at a level much greater than the Nimitz class carriers.

People will be able to share information across nations, and this is crucial. We call it maritime domain awareness, but now you’ve included the air space that’s part of that maritime domain.

There is another aspect of the Ford, which is important to handling the information systems as part of the evolution of the fleet. We’ve never really talked about the cooling aspects. But if you go down to Newport News and take a tour of the Ford, right now, one of the things they really like to brag about is innovations in the cooling system. All of us know the processing power takes its heat.

And so, you’ve got to be able to cool it. Ford more than doubles the cooling system capacity of a Nimitz-class carrier.

But let me close by circling back to the future of the air wing for the next 20 years and the value we see in the F-35C.

We are buying all production aircraft currently. We see the coming of the Ford and the coming of the F-35 as highly synergistic for the fleet and its operation as a sea base. And with the F-35C must come Block 3F capability, which has a fully enabled set to operate the weapons we use at sea, multi-ship integration and a host of other very important capabilities important to how we expect to operate in the future. We are not going to accelerate the number of production airplanes until we get to Block 3F which will give us the capability that we need to operate off the carrier.

Once we marry up F-35C with key capability investments in the Super Hornet, E-2D, [EA-18G] Growlers, and a mix of unmanned capabilities, we will continue to have an air wing that can dominate in any environment.