Navy to Test Fix for F-35C Catapult Problem Next Week 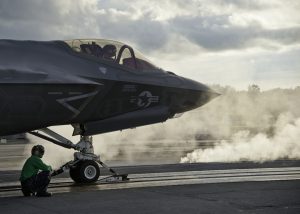 F-35C launching from a test range in Lakehurst, N.J. US Navy Photo

WASHINGTON, D.C. — The Navy is starting tests next week for a fix to a critical safety issue found on the F-35C Lighting II Joint Strike Fighter, the head of F-35 Joint Program Office told reporters on Thursday.

During testing in 2016 on USS George Washington (CVN-73), F-35C pilots complained when the aircraft was catapulted from the carrier, the aircraft excessively bobbed up and down on its nose gear on its trip down the carrier’s deck making it impossible to read instruments, difficult to reach emergency controls and causing a certain amount of pain in pilots.

“Fleet pilots reported that the oscillations were so severe that they could not read flight critical data, an unacceptable and unsafe situation during a critical phase of flight. Most of the pilots locked their harness during the catapult shot which made emergency switches hard to reach, again creating, in their opinion, an unacceptable and unsafe situation,” read a December from the Pentagon’s director, Operational Test & Evaluation report.
“The U.S. Navy has informed the Program Office that it considers this deficiency to be a ‘must fix’ deficiency.”

According to a late December report on the issues — first obtained by Inside the Navy — ” multiple factors are contributing to the problem, including the pilot’s seat restraint and hand-hold (grab bar) locations, the mass and center-of-gravity of the F-35 helmet and display unit, the physical characteristics of the nose landing gear strut (load vs. stroke, damping), and the length and release load of the repeatable-release hold-back bar.”

In an evaluation of the pilot discomfort following 105 test launches on George Washington (CVN-73), 74 resulted in moderate pain, 18 caused severe pain, reported Inside the Navy.

“The first fix that we’re looking at… is when you first hook up the airplane to the catapult there’s a pullback mechanism and we pullback really hard and that compresses the strut a lot and when you launch you get the oscillations,” Bogdan said.
“What they’re trying to figure out is can they reduce some of that tension on the pullback, still get the effective energy they need to get the plane of the deck but without compressing the strut so much on the pullback. They’re doing multiple tests out there to figure out the range of pullback capability. We should know by the March timeframe if that’s going to help.”

A Navy official told USNI News the testing was set to start on Feb. 21.

Rear Adm. Mat Winter, deputy program executive officer for the F-35 said if the pullback fix worked, it would be easily translated to the ship.

“The important point is the Lakehurst testing is 100 percent representative, so we’ll know the technical fix and take it to the ship,” he said.

The up and down oscillations issue is similar to one pilots suffered in early testing of the F/A-18 Hornet that was fixed, a Navy official told USNI News on Thursday. The service was able to adjust the pullback force during launch of the aircraft that corrected the issue with the Hornets.

However, if the early attempts at a fix don’t work, it may require the Navy more extensive fixes to the nose gear and the helmet display, according to the December paper.

The last ditch effort would be to redesign the entire nose gear for the F-35C which could take years and further delay the program.

“A redesign could incorporate all the benefits of the advanced modeling efforts, but is expected to require a multiyear effort to re-qualify a major redesign,” according to the December paper.