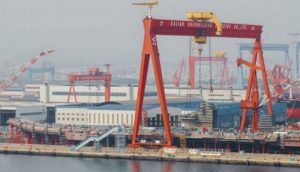 Construction of the Shandong, named after a province in China’s east coast, began in 2014, the mobile app of Shandong television and radio said in a report seen on Tuesday.

The Shandong, mainland China’s first indigenous aircraft carrier, was “taking shape”, the report said. It did not give a date for completion or further details.

It was being built in the northeastern port of Dalian, the Defence Ministry has said.

The country’s first aircraft carrier, the Liaoning, was bought from Ukraine in 1998 and refitted on the mainland.

In January 2017 a group of mainland Chinese warships, led by the Liaoning, tested weapons and equipment in the South China Sea in what Beijing’s foreign ministry described as routine exercises that complied with international law.

The group of warships sailed through waters south of Japan and then rounded east and south of Taiwan in December on their way to the southern mainland Chinese province of Hainan.

But Beijing is years away from perfecting carrier operations similar to those that the United States has practised for decades. The eventual launch of the Shandong will further rattle self-ruled democratic Taiwan, which Beijing claims as its own, as well as Asian neighbours Brunei, Malaysia, the Philippines, Taiwan and Vietnam with disputed claims in the South China Sea.

Mainland China and Taiwan have been diplomatic and military rivals since 1949 when the Nationalist, or Kuomintang, troops lost the Chinese civil war to the Communists and fled to the island.

Bilateral trade, investment and tourism have grown significantly in the past three decades, but tensions have been simmering since the island elected President Tsai Ing-wen from the independence-leaning Democratic Progressive Party last year.

Beijing has vowed to attack if the island declared de jure independence.