The US Navy’s $13 Billion Answer to China and Russia 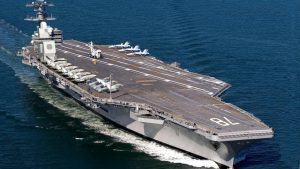 China’s lone aircraft carrier, the retrofitted Liaoning, has spent the past several weeks cruising around the South China Sea. It recently passed through the Taiwan Strait, which seen by some observers as a threatening message to Taiwan’s president, Tsai Ing-wen.

The Taiwanese president, of course, set off diplomatic red alerts when she phoned Donald Trump to congratulate him on being elected president – and he took the call in what Beijing considers a violation of the “One China” policy in place since 1979.

But if China’s intent was to shiver a few timbers by its display of naval might, the American military might have reason to take the warning lightly. The Navy just announced that after delays, the $13 billion supercarrier USS Gerald R. Ford – the most advanced and expensive aircraft carrier every built – will be ready for delivery by April.

The Ford will be the first of a new class of carriers being built as part of a $40 billion program, and it will be one of nine new vessels the Navy is adding in 2017. They include four littoral combat ships, two destroyers and two submarines.

In its 2016 index of U.S. military strength, the conservative Heritage Foundation gave the Navy a “marginal” rating. And there was no shortage of talk in the past election year about the American military falling behind. But it’s hard to make the case that the Navy is outgunned when it comes to aircraft carriers: It currently has 10 1,000-foot Nimitz-class carrriers in service.

The Ford class ships, which are designed to accommodate the F-35 fighter jets, would be a game-changer if there was another country even in the carrier game in a meaningful way.

A column in Bloomberg View early last month described Russia’s “embarrassing aircraft carrier” the Admiral Kuznetsov  — the only active one in its fleet — as lumbering along “belching black smoke, accompanied by tugboats standing ready to tow because of frequent breakdowns.” The column by Tobin Harshaw also referred to media reports saying that plumbing problems has reduced the number of latrines to 25 for a crew of 2,000.

Harshaw suggested that the Kuznetsov might be worth more as scrap metal than as a projection of Valdimir Putin’s military muscle.