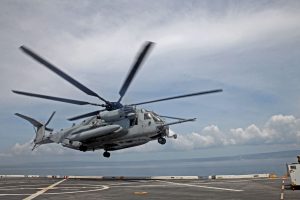 Marine Staff Sgt. Jonathan Lewis boarded a CH-53E Super Stallion helicopter one clear night in September 2015 for what should have been a routine training exercise at Camp Lejeune, N.C.

One Marine after another exited the back of the military’s largest helicopter to practice rappelling 50 feet down a rope in the dark. It’s the kind of skill that Lewis, a decorated 31-year-old communications chief from Fauquier County, would use as a member of the Yorktown-based Fleet Anti-Terrorism Security Team, which races to hot spots around the world to protect embassies and conduct other operations.

But chaos broke out as Lewis inched toward the open ramp at the rear of the helicopter.

There was a sudden high-pitched whining sound, a bang and a pop. The helicopter began to spin clockwise and lose altitude.

Investigators believe that because Lewis was on the ramp, he likely was unable to secure himself and was thrown out of the aircraft with his rope still clipped to him. Those assessments were included in an internal investigation into the crash obtained by The Virginian-Pilot.

The helicopter’s pilots did what they could to stabilize the helicopter, but there was no stopping the inevitable. The investigation later found that the drive shaft for the tail rotor on the older aircraft had disconnected in flight.

The 16-ton helicopter’s fuselage split in two as it slammed into the ground. Investigators believe Lewis was struck or crushed by the wreckage.

He suffered broken legs and blunt-force trauma. A hospital corpsman on the scene and four medical personnel on a short flight to the base hospital cared for him, but he remained unresponsive and died.

Eleven others were injured in the crash, which shone a spotlight on the safety of an aging aircraft that is the Marines’ primary option for moving troops and cargo.

It remains in high demand more than 35 years after entering service, but the Marines have said the Cold War-era workhorse hasn’t received the resources needed to keep it operating at a high level. The Marine Corps purchased more than 230 CH-53Es from the Sikorsky Aircraft Corp. between the late 1970s and early 1990s, but after decades of flying and more than two dozen crashes, fewer than 150 remain, more than 50 below what the Marines say is needed.

The Super Stallion and its Navy counterpart, the Sea Dragon, have remained in service years longer than planned because of delays in developing replacements. Each has struggled with poor readiness and above-average crash rates in recent years.

The fatal crash in September drew attention to an issue Marine officials had not previously been aware of and weren’t inspecting at the time. The cause of the crash was deemed an “emerging risk” by the commanding officer of Marine Aircraft Group 29 in his endorsement of the investigation.

The Marines afterward began inspecting the related tail rotor assemblies on the flight line. New engineering instructions also were put in place for the helicopters around the world.

“In my opinion, these interim risk control measures have worked. They have saved lives by averting further mishaps of this nature,” wrote the officer, whose name was redacted from the report.

“While we cannot bring (Lewis) back, his unfortunate loss brought to light an emerging risk to his fellow Marines and enabled the CH-53 community to take the necessary steps to potentially avoid future mishaps of this nature.”

But the investigation also revealed another problem: The helicopter had been signed off as “safe for flight” the day of the crash. It shouldn’t have been.

Two inspection work orders had not been completed, although investigators said the failure to do so was not relevant to the crash.

“Although ex post facto analysis indicates that human factors were not causal to the mishap, attention to detail matters,” the commanding officer of Marine Aircraft Group 29 wrote in the report.

Lewis joined the Marines in 2006. Before becoming a member of a FAST company, Lewis had deployed with the 11th Marine Expeditionary Unit, and served in Bahrain and aboard the amphibious dock landing ship USS Rushmore.

He is buried at Quantico National Cemetery.