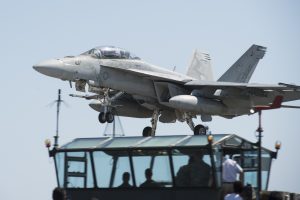 An F/A-18F Super Hornet, attached to the Diamondbacks of Strike Fighter Squadron (VFA) 102, assigned to Carrier Air Wing (CVW) 5, practices a touch-and-go landing on May 11, 2016. US Navy Photo

Three out of four F/A-18s are not ready to go to war and it could take up to a year for the Navy to pull together enough reserve fighters to field a surge force air wing, service officials told members of the House Armed Services Committee on Thursday.

A combination of warfighting demand, delays of the Lockheed Martin F-35C Joint Strike Fighter entering the fleet and sequestration cuts from the Budget Control Act of 2011 have left the Navy’s tactical aviation force just able to meet the basic requirements to combatant commanders, the commodore of Strike Fighter Wing Atlantic, Capt. Randy Stearns, told a joint hearing of the HASC readiness and seapower subcommittees.

Stearns said a few years ago, the Navy could have a reserve air wing ready to surge with a carrier strike group in 90 days.

Now, “it would take me six to 12 months,” to get another air wing ready to go to deploy with a carrier strike group due to lack of reserve forces,” he said.

“There’s nothing to pull from in the back,” Stearns told seapower chair Rep. Randy Forbes (R-Va.) in response to a question.
“We’ve already pulled everything forward. There’s nothing left.”

With the limitations, to support ongoing missions from the one in four aircraft deployed, the service has had to route supplies to deployed units from ones on shore and even pull parts off idle aircraft to get to squadrons out at sea.

“Cannibalization, or taking parts off an airplane, that is our last resort. We work through the supply system and as you know our A through Ds are stuck in the depot because of unforeseen utilization. Our Super Hornets – we’ve had parts problems over the last few years starting in 2012 due to sequestration and some other factors, but we’ve never caught up really,” Stearns said.
“That’s a regular occurrence.”

For example, to support the recently announced extension of the Truman Carrier Strike Group (CSG) to continue strikes against ISIS in Syria and Iraq as part of Operation Inherent Resolve (OIR), Stearns had to identify three squadrons to use as a source for spare parts to keep the four Super Hornet squadrons in Carrier Air Wing 7 flying.

“I have three squadrons I had to call and tell ‘be ready, you’re the donors for the Truman extension’,” he said.
“That was not paid for. That was unforeseen and that’s a tax back here on the system.”