Pentagon proposals to reportedly slice $1 billion from the annual commissary budget may not hinge on closing stores, but on raising prices for patrons, sources said.

But commissary advocates say that still could ultimately signal the death knell for commissaries.

Until the Defense Department unveils its fiscal 2015 budget request in early March, nothing is certain. But several sources said the current thinking focuses on keeping stores open while increasing prices.

Options under consideration include raising the 5 percent surcharge that customers pay at the register, increasing prices on individual goods in the stores or both. 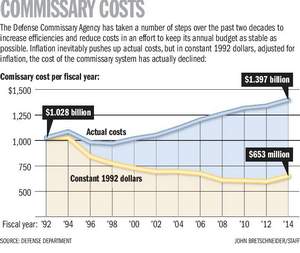 The model for a new pricing system would be the military exchanges, which sell products at marked-up prices and use the profits to operate the stores.

Either change would require legislation. Under current law, the surcharge is set at 5 percent, and commissaries must sell items at cost, without markups.

The 2014 budget for the Defense Commissary Agency is about $1.4 billion. The $1 billion slice would be made starting in fiscal 2015, with the heaviest cuts coming in 2017, said a former DoD employee familiar with current discussions.

“It is a real proposal within the building. Unless very senior officials turn it around, it will be in the Pentagon’s budget proposal,” he said, adding that he has not seen written details of the proposal.

“There had been keen interest in closing stores, but they realized it was not viable,” he said. “The cost of operating overseas stores would increase.”

The deliberations are causing consternation for military advocates. “It’s military families’ purchasing power that will change,” said Joyce Raezer, executive director of the National Military Family Association. “If you increase the surcharge and prices, you take away the savings, and you take away the benefit.”

Concerns also are being voiced on Capitol Hill. “DoD should find other ways to save taxpayers money, and that’s why I’m drafting legislation to protect all commissary and exchange services through the end of this administration,” said Rep. Tim Griffin, R-Ark.

While no one interviewed by Military Times said they had seen written documentation seeking a $1 billion reduction in the annual commissary budget, three people who asked not to be identified said they are familiar with discussions to that effect within the Pentagon.

Recent comments by Army Gen. Martin Dempsey, chairman of the Joint Chiefs, seem to support a shift in thinking toward price increases.

During a Dec. 5 Facebook town hall event, Dempsey insisted there is no plan in the works to close commissaries. But he added: “You may know that military exchanges operate without being subsidized by your taxes. The same potential exists with commissaries. … We’ve got to drive toward greater efficiencies, and this is just one of the potential areas.”

Military Times reported Dempsey’s remarks in December. When asked if there were any updates, a Pentagon official again offered Dempsey’s Dec. 5 comments.

Turning commissaries into a nonappropriated fund system like the exchanges is an option worth considering, said Paul Taibl, vice president for policy at Business Executives for National Security.

“Prices might go up, but it might be a more economical way to approach [the commissary benefit],” Taibl said.

With top Pentagon officials saying current personnel spending is unsustainable, “you have to throw commissaries in the mix,” he said.

Pentagon officials have said the commissary system is one of many benefits under consideration for changes in the quest to stem “unsustainable” budget growth.

But some people question the “sustainability” logic as applied to such a comparatively small target.

“When adjusted for inflation, the commissary cost has remained essentially flat,” said one DoD source who asked not to be identified. “Why not maintain a benefit that is proven to be sustainable, and search for efficiencies that will level off cost growth of other benefits so they can be made sustainable, just like the commissary?”

The commissary budget is about 0.3 percent of the overall defense budget. At a congressional hearing in November, DeCA Director Joseph Jeu noted that since the services’ commissary systems merged into one agency in 1991, DeCA has reduced its operating costs by more than $700 million a year.

“This is a model to emulate, not decimate,” said Patrick Nixon, president of the American Logistics Association, and a former DeCA director. “It’s part of the solution, not the source of the budget problem. We challenge any program [in DoD] to … show they can deliver more bang for the buck.”

Taibl acknowledged that the commissary’s $1.4 billion budget “is not a big chunk” of the total defense budget.

“But you have to look at every aspect. It’s not just economics, it’s the purpose. What is the commissary designed to do? Is it fulfilling that objective? Is it better to put money in somebody’s pocket? That’s what they have to decide.”