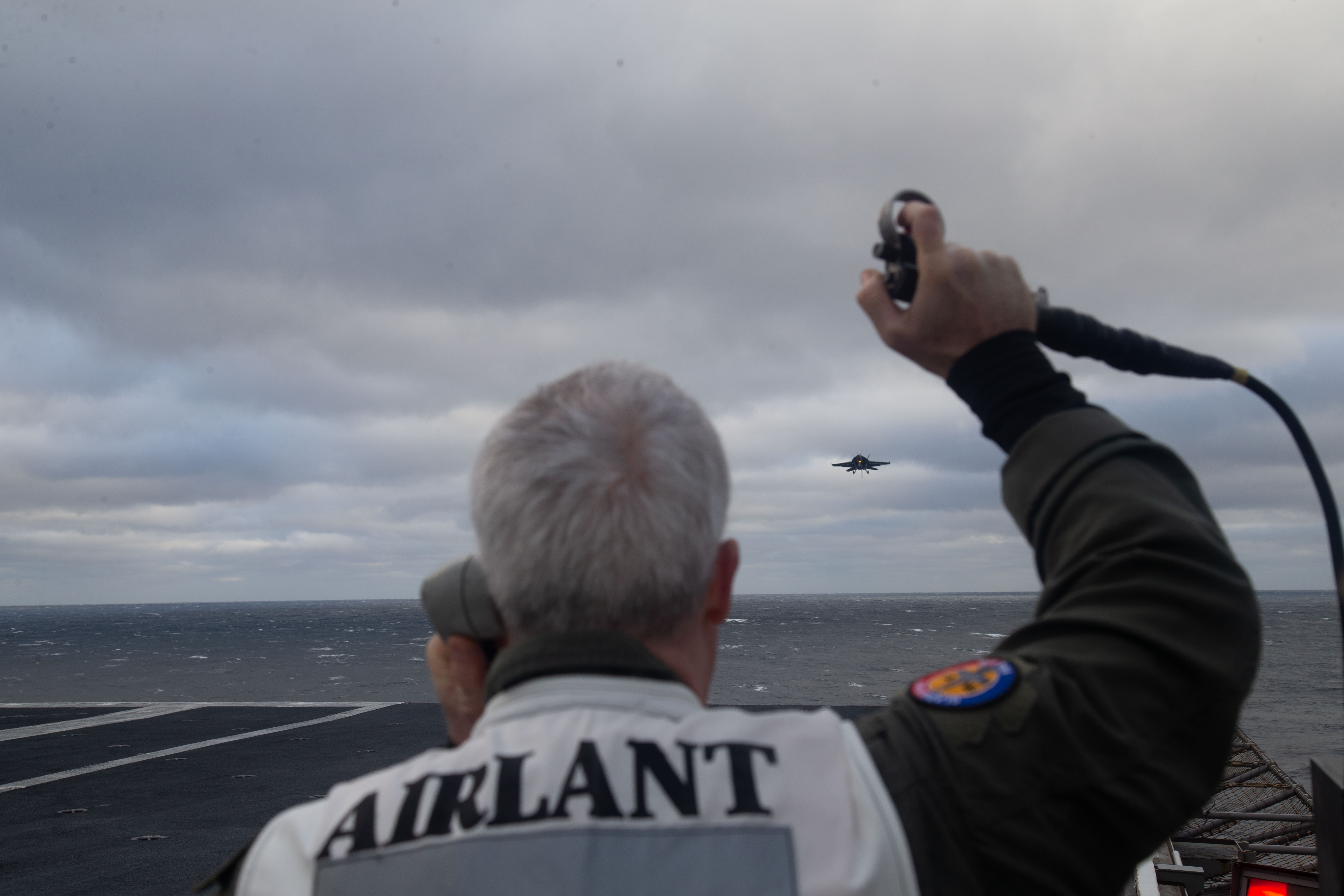 The Navy is in the final stages of fully adopting a Precision Landing Mode for fighter pilots, with young fleet replacement squadron pilots for the first time conducting carrier qualifications with the tool that significantly cuts down on the work required during an approach to the back of an aircraft carrier at sea.

Capt. Dan Catlin, the commanding officer of Strike Fighter Squadron (VFA) 106, this week brought some newly winged pilots out to USS Gerard R. Ford (CVN-78) to conduct their first landings at sea in an F-/A-18E-F Super Hornet, both in the daylight and at night.

“I will say that, without a doubt, hands down, Day 1 yesterday was by far the smoothest evolution, best performance we’ve seen from our students ever – and that’s by an awful lot,” said Catlin, who personally oversees all his students’ carrier qualifications.

The Precision Landing Mode – a software tool added to the jet’s flight control and mission computers that significantly reduces the number of inputs a pilot has to make on final approach – was first used at sea by test pilots in 2015 under the program name MAGIC CARPET and saw its first usage in a fleet squadron in 2017. The Navy hasn’t been comfortable teaching new pilots how to use the landing tool, though, since there were so many failure modes that could arise on the jet that would prevent the plane from using Precision Landing Mode. Thanks to a software update tested and approved last fall, brand new pilots are finally able to learn how to land with this tool that will make them much more successful with much less work.

“You’ll see the white knuckles, the shaky knees, and you can see the expression on the face of somebody who’s just landed on an aircraft carrier at night for the first time – we didn’t see that last night,” Catlin told reporters today in a call while aboard Ford.
“What we saw was a lot of confident aviators who realized that technology is really making something that was supposed to be incredibly hard actually a little bit of fun – not a lot of fun, flying at night is never anyone’s first choice – but the expression on their face really told the story of what this capability brings. They were confident, and quite frankly I think they had a good time out there.” 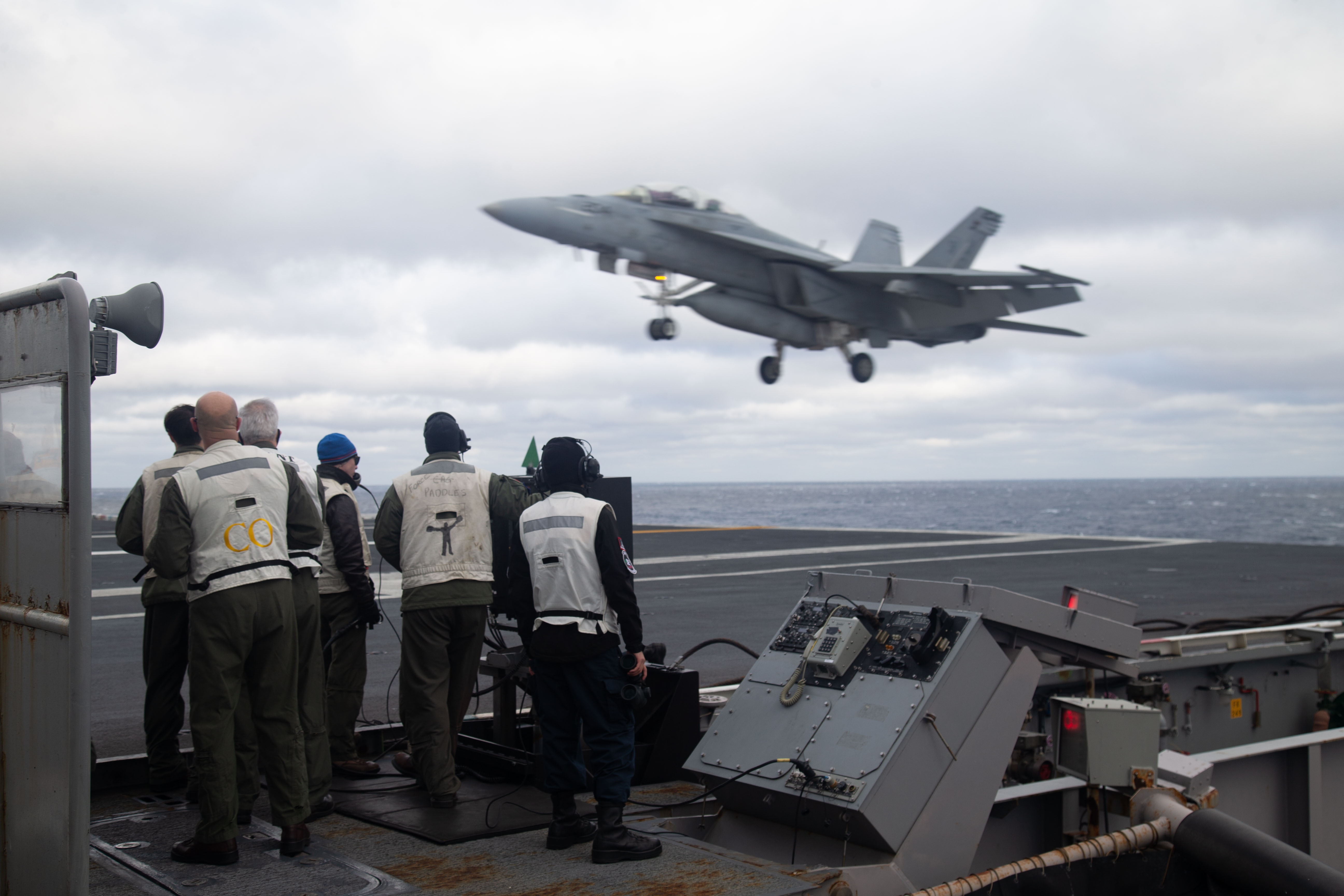 Catlin explained that, prior to PLM, a pilot would make an average of about 300 minor adjustments during the final 18 seconds on approach to landing on a carrier – having to balance how fast the aircraft was going, whether it was on the right glide slope to land on a moving aircraft carrier, and whether it was properly positioned laterally.

“That’s a lot of corrections on the stick and the throttle,” he said.

With PLM, that figure can be reduced down to single digits.

The pilot manually inputs the ship’s speed, and then the PLM system automatically computes the proper 3.5-degree glide slope for a safe landing. Once a pilot gets on the ball – not coming in too high or low – the PLM system locks in and maintains that trajectory by managing the throttle.

“What that allows the pilot to do, especially a young, inexperienced pilot, is spend a lot more time focusing on the scan of where that pilot is on the glide slope and where they are on lineup,” Catlin said.

“Landing on an aircraft carrier is the most dangerous thing you can do in all of aviation, that’s across civil and military. It’s no small feat to land on an aircraft carrier at night, with a pitching deck, and after a long six-and-a-half-hour-long combat mission. It’s an incredibly dangerous evolution,” he continued.
“What PLM allows us to do is to make that evolution much, much more safe and more efficient.”

Capt. J.J. Cummings, Ford’s commanding officer, said on the call that he had used PLM for about 20 landings himself and was amazed at how few changes he had to make with the stick while coming in for a landing. He said he had seen video of test pilots landing with their hands up, not touching any controls – but Cummings and Catlin stressed that this isn’t meant to be an unmanned landing tool, but rather it significantly cuts down the workload for the pilot.

“The precision landing mode, it’s been eye-watering to watch [newly winged pilots] go behind the boat, day and night,” he said. The young aviators made about 40 passes on Sunday, he said, with just a small number who bolter – when the landing gear hits the flight deck but doesn’t latch onto the arresting gear to stop the plane – and just a few were called by the landing signal officers to make adjustments on their approach.

“I recall one student, his first night trap ever in F-18 Super Hornet, he flew what’s called a rails pass: basically essentially a perfect pass to what’s called an OK 2 wire for his first trap at night in a Super Hornet, and it was staggering to observe,” Cummings said.
“This PLM system is amazing for the stability that it provides the aircraft on glide path, and we’ll see increased boarding rates for these aviators and then get folks to the fleet sooner, because generally you have about 5 percent of the fleet replacement pilots will disqualify because of boarding rate or lane performance. With PLM, we’re going to see that number drop significantly and possibly to zero.” 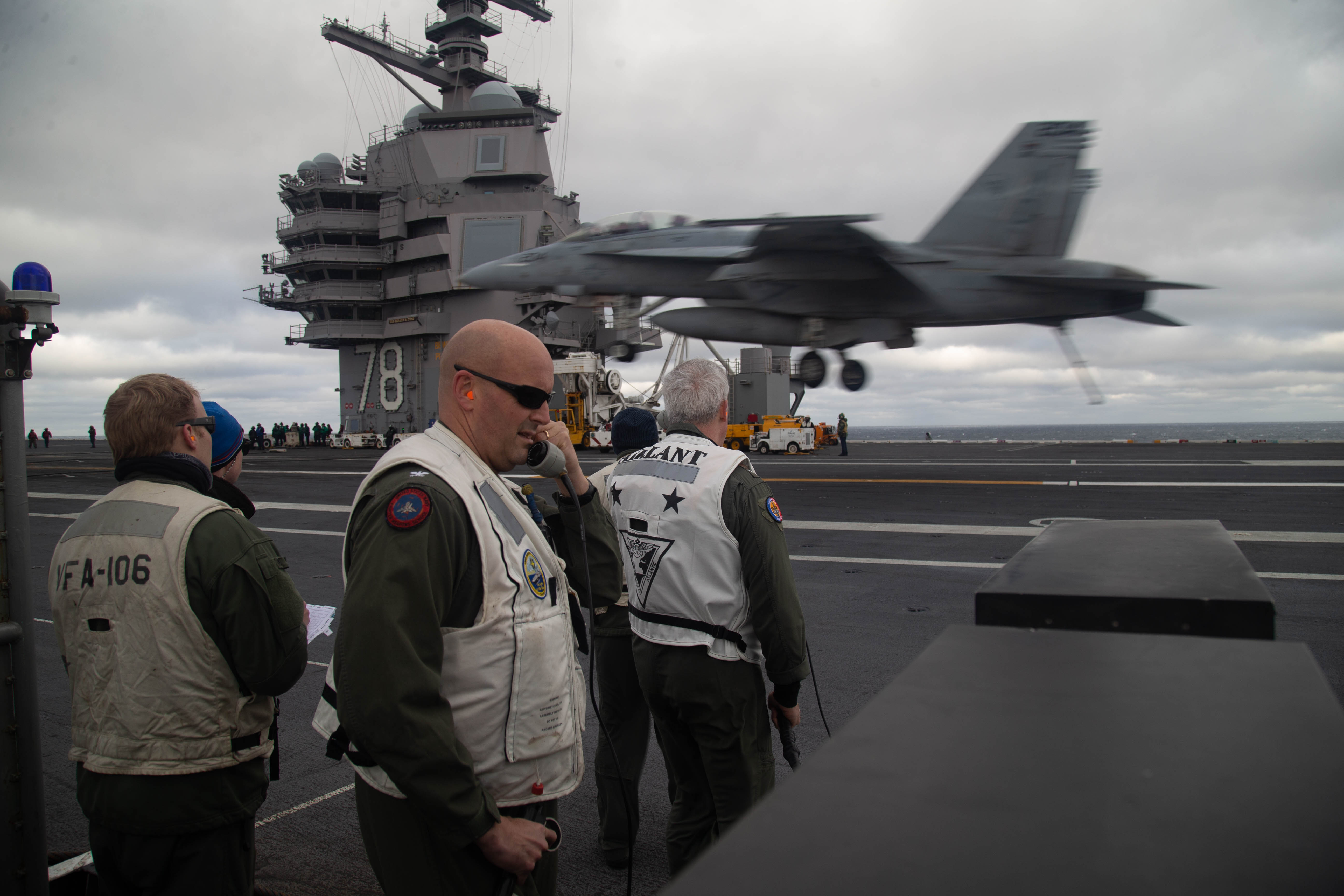 Catlin told USNI News during the call that last fall’s software update finally paved the way for all pilots of all experience levels being able to use this landing tool.

“For a young aviator, if you teach them how to do PLM and there’s a good possibility they may not have that ability to land in that mode, that would be a problem. So we held off on the students while the enterprise team got together and the industry team and actually got the full redundancy,” he explained.
“I had a fleet command through 2018 and we flew PLM, but even the experienced aviators, myself included, we had to do what’s called reversed currency, where we’re allowed to fly a certain number of PLM passes and then we had to get what’s called a manual pass or an automatic pass at some point just to maintain that proficiency in case there’s an aircraft malfunction to where we couldn’t actually use PLM.”

Though pilots would likely want to retain their ability to land on a carrier manually – Catlin said there’s just one failure mode that would prevent PLM from working, and though that failure mode is almost unheard of in Super Hornets, it could still potentially occur – Cummings said the fleet would see great benefits from students learning to fly with PLM.

“PLM will make us max efficient. So usually (while serving as the ship hosting carrier qualifications) you have days where students would struggle with getting aboard, and we would have to, sometimes we would bleed over a day, sometimes two days over, because we’re about the mission: the mission is to come out to sea and carrier qualify X amount of pilots, and we do not pull in until that mission’s complete,” Cummings said.
“With this system of PLM, we should find that the amount of times that folks don’t get aboard, bolter or have problems behind the ship at night will come down – I would assess to zero, possibly – which allows us to get back in sooner, and then we either get back to maintenance or whatever the case may be. So we will find, I believe, over time, carrier qualification at sea periods will get a little bit shorter because of how efficient PLM is for pilots flying on the ball.” 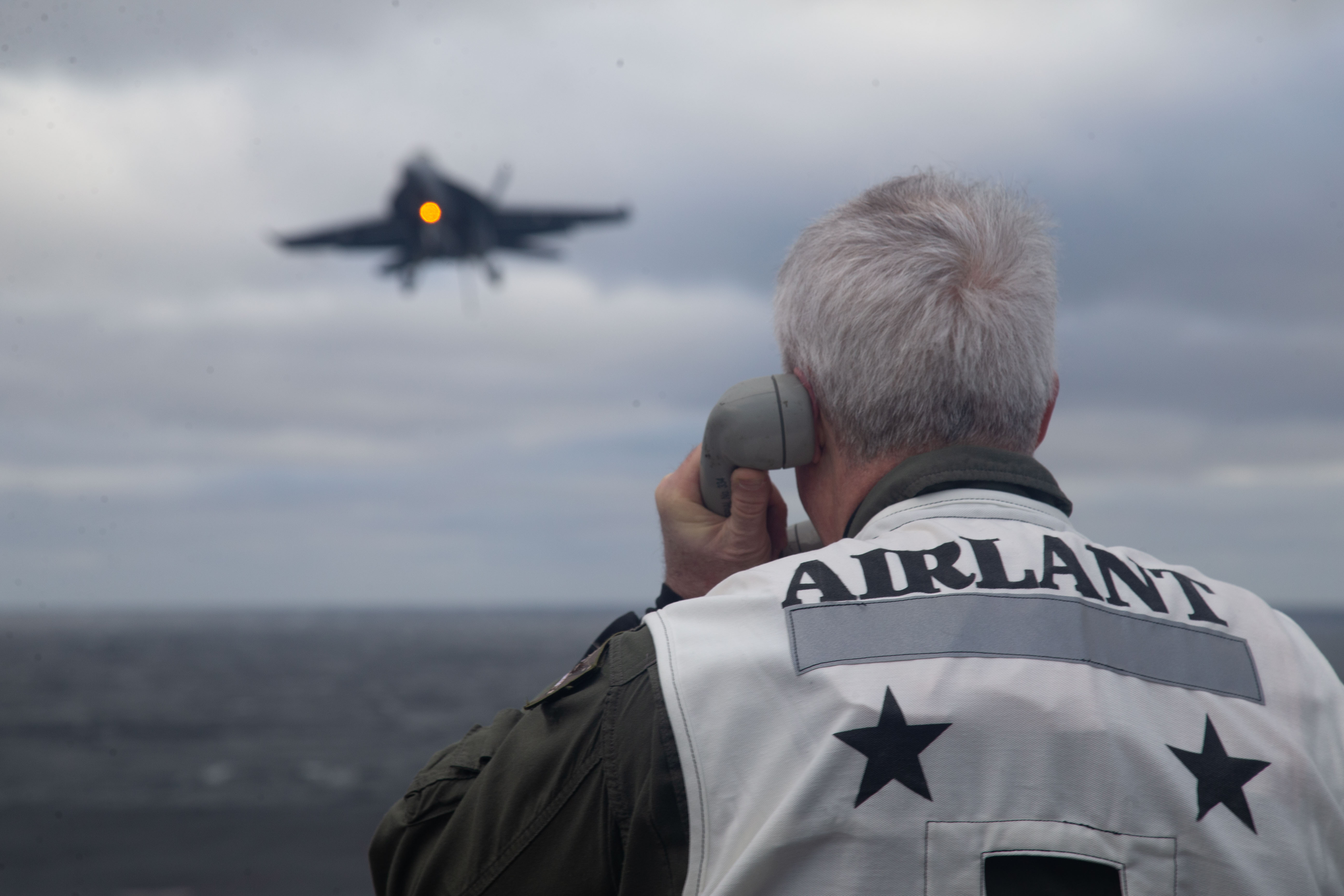 Ford has had to balance its own post-delivery test and trials schedule with serving as the only East Coast carrier qualification ship available for new pilots to train on. USS George H.W. Bush (CVN-77) has been tied up in long-term maintenance, USS Dwight D. Eisenhower (CVN-69) is working up for its second deployment in a year, and USS Harry S. Truman (CVN-75) did its own double-pump deployment and is now in maintenance. Ford has had to carry the entire load of serving new pilots on the East Coast – which helped propel the ship to a milestone of 7,000 catapult shots and 7,000 arrested landings, which Cummings said he thought the ship would hit today. The ship had achieved just 750 of each prior to its flight deck being certified in March, showing how busy the carrier has been in the past year balancing tests and CQs.

Cummings will hand over command of Ford this Friday. He previewed the rest of the ship’s path towards a maiden deployment: The carrier will have two more underway periods to finish up post-delivery tests and trials (PDT&T). In May, the ship will begin preparing for full-ship shock trials (FSST), which will begin in June. By about September, the ship should be done with shock trials and ready to go to a planned incremental availability (PIA) maintenance period at Newport News Shipbuilding. The length of that maintenance period is largely dependent on how much damage occurs during the shock trials, though the Navy-shipbuilder team has taken a lot of work planned to take place during that PIA – such as upgrading computers and performing tank inspections – and instead performed the work ashore and even at sea in recent months, to help speed up the PIA. Once Ford comes out of maintenance, it will go through about 15 months of workups and then be turned over to the fleet for tasking.