Home » Articles » Are Light Carriers Poised to Make a Comeback?

Are Light Carriers Poised to Make a Comeback? 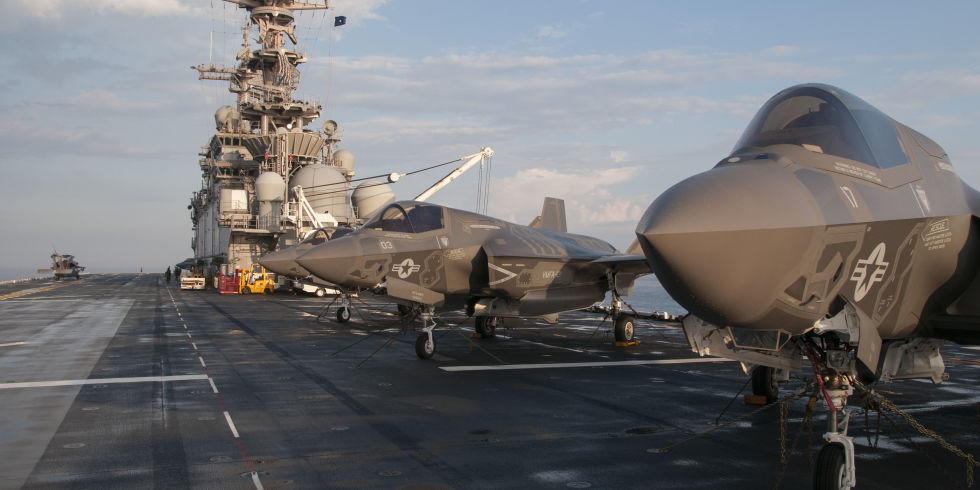 The U.S. Navy could find itself sailing smaller, lighter aircraft carriers in the near future if Congress has its way. The upper half of the legislative branch added funding to the 2018 defense budget to study the possibility of building so-called light aircraft carriers, complementing the service’s gigantic 100,000-ton nuclear-powered supercarriers. The ships would be used in situations that don’t warrant a full-sized carrier, or supplement a supercarrier’s firepower in wartime.

The U.S. Senate’s 2018 defense bill, according to U.S. Naval Institute News, includes $30 million for “a preliminary design effort to create a light carrier for the service.” The Chairman of the Senate Armed Services Committee, senator and former naval aviator John McCain, released his own white paper on defense spending in January of this year that called for the U.S. Navy to adopt light aircraft carriers. McCain’s paper said:

The Navy should also pursue a new “high/low mix” in its aircraft carrier fleet. Traditional nuclear-powered supercarriers remain necessary to deter and defeat near-peer competitors, but other day-to-day missions, such as power projection, sea lane control, close air support, or counterterrorism, can be achieved with a smaller, lower cost, conventionally powered aircraft carrier. Over the next five years, the Navy should begin transitioning from large deck amphibious ships into smaller aircraft carriers with the goal of delivering the first such ship in the mid-2030s. 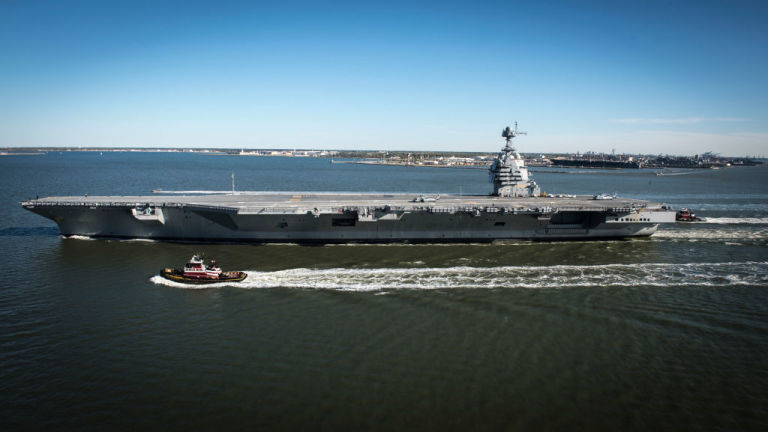 For decades, the U.S. Navy has maintained that supercarriers—nuclear-powered aircraft carriers displacing more than 90,000 tons—are the ideal platform for maintaining naval dominance and power projection. The Navy’s reasoning is the bigger the carrier. The larger the carrier, the more aircraft, munitions, and fuel it can carry, and the more sorties it can fly in combat. While the U.S. Navy maintained light carriers up until the end of the Cold War, these were actually just normal aircraft carriers built during World War II that were of typical size at the time they were built, but were later dwarfed by the debut of the supercarrier. The “light” carriers USS Midway and USS Coral Sea were retired between 1990 and 1992 but never replaced.

The problem is that supercarriers are growing unaffordable. The only supercarrier built in the last decade, USS Gerald R. Ford, is two years behind schedule, cost nearly $13 billion, was 22 percent over budget, and incurred $4.7 billion in research and development costs. While the next carrier, John F. Kennedy won’t incur as much in R&D costs, the Navy’s own estimate pegs it at $11.4 billion with the General Accounting Office saying that number will likely be exceeded.

Light carriers would certainly be useful. A light carrier is an ideal alternative to a full-size supercarrier for places such as Libya, Somalia, or the Philippines, less dangerous conflict zones that still require airpower. A light carrier could also escort convoys during wartime, or augment a regular carrier’s firepower in a conflict against another big power such as China or Russia. 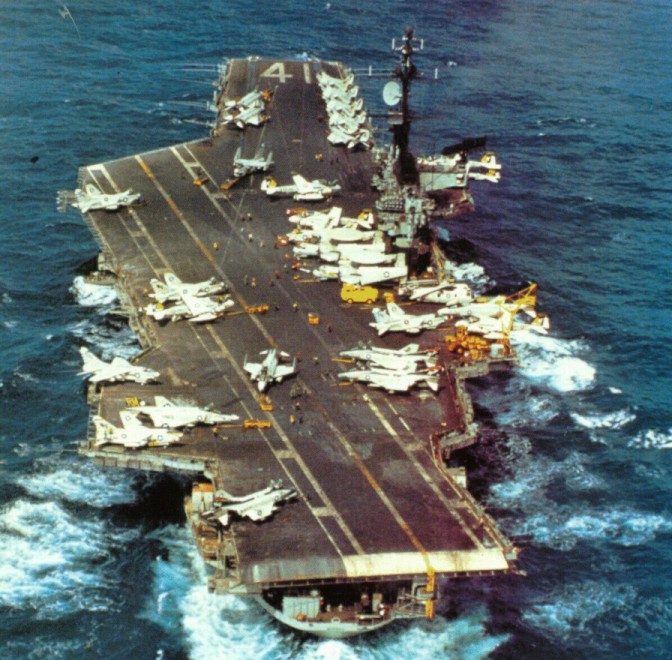 What could a modern day light carrier look like? There are two likely possibilities. The first and cheapest is an adaptation of the Marine Corps’ “lightning carrier” concept. The concept involves loading up a $3 billion America-class amphibious transport, which normally carries up to six F-35B Lightning II fighter bombers and an assortment of helicopters, with approximately 20 F-35Bs.

The plan has both upsides and downsides. On one hand, America-class ships would be cheaper to buy and involve little to no research and development. The Navy would simply buy the vertical takeoff and landing version of the F-35, and fly them off the ship. In fact, placing orders for more America-class ships would likely drive the per-unit ship price down. The ships could even be used as amphibious transports again in a pinch. A force of 20 F-35Bs would constitute half of the offensive firepower of a Ford-class supercarrier, on paper anyway, for a quarter the cost of the ship.

But the vertical-launch F-35B has a shorter range than the carrier-borne version, the F-35C. Shorter than a Ford supercarrier and lacking aircraft catapults, an America-class light carrier couldn’t carry E-2D Hawkeye airborne early warning and control planes and their networking capability that allows them to share targeting data with F-35s and Aegis destroyers. Instead the America-class carrier would need to rely on a radar-equipped Osprey tiltrotor aircraft—which doesn’t even exist yet—to provide early warning and control for the F-35s as well as helicopters for anti-submarine warfare. All of these tiltrotors and helicopters need hangar and deck space, so you can begin to understand why the Navy is fond of big-deck supercarriers. 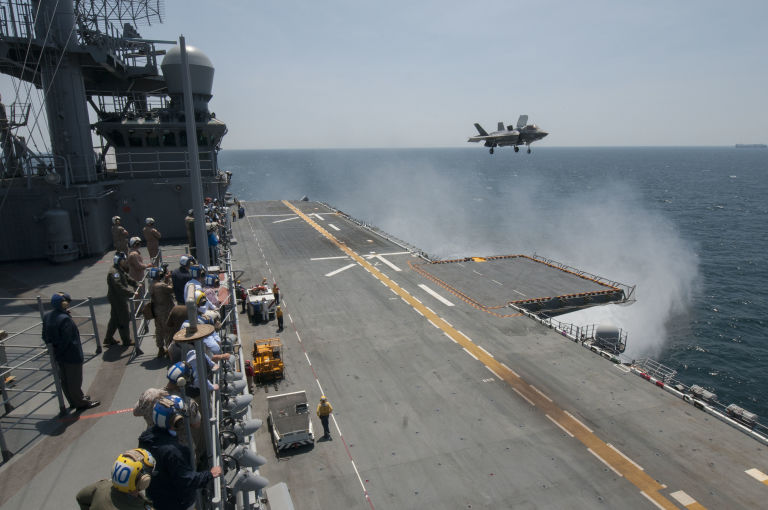 Another alternative is a more heavily modified America-class ship designed to operate a wider variety of aircraft. Installing an angled flight deck, bigger, more powerful aircraft elevators and catapults and arresting gear (“traps”) would allow the carrier to operate Super Hornet strike fighters, the carrier takeoff and landing version of the F-35, the F-35C, E-2D Hawkeyes, and other carrier aircraft. It would operate almost exactly the same as a Ford-class supercarrier.

Adding more capability would also add complexity and cost. Modifying the amphibious ship’s hull by adding an angled deck, new elevators, and so-called “cats and traps” would cost money. Exactly how much this would cost is the focus of the study the Senate wants to fund. If costs spiral, which seems likely given the history of U.S. naval shipbuilding, the light carrier will no longer be cost-effective at a certain point. A smaller carrier, although operating the same as a Ford-class supercarrier, would carry fewer planes and generate fewer combat missions per day in wartime.

Does the Navy need light carriers? Probably not, but they would sure be nice to have. Should it buy them? That depends—Trump’s shipbuilding budget disappointed many, as it came nowhere near funding the 350 ship navy he promised during the 2016 presidential campaign. If funding increases become available that allow the Navy to fund the light carrier concept without cannibalizing other programs, the choice to proceed comes with less downsides. If the Navy would find it necessary to shortchange another program—or is unable to address the already problematic fighter shortfall, the project could have costs that are measured in more than mere dollars. In the meantime, $30 million is a not unreasonable sum for a concept that could revolutionize U.S. naval aviation.