By Lee Tolliver
The Virginian-Pilot 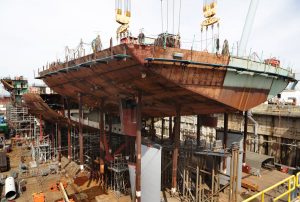 The hulk of steel moved painfully slow until it was in position.

You don’t just sling around 930 metric tons of metal.

In a process that would take nearly five hours, workers at Newport News Shipbuilding on Thursday morning picked up the lower stern of what will be the John F. Kennedy aircraft carrier and moved it from the dock to its position at the tail end of the ship.

The lower stern unit seals the rear end of the hull and contains tanks, steering gear rooms and an electrical power distribution room. Later Thursday, crews would be attaching it to the ship’s hull and connecting the rudders and brackets for the propellers’ drive shafts.

“This unit is very critical to the progress of the ship,” said construction supervisor Lee Murphy. “This will seal the back end of the ship and allow us to move forward towards the bow.

“This is a very big moment.”

The lower stern unit took about a year to build and is the 224th piece of a 447-unit puzzle that will turn into CVN 79 – the second Ford Class aircraft carrier. The Gerald R. Ford was turned over to the Navy in May.

The Kennedy is scheduled to be turned over in 2022.

Construction – which started with the laying of the keel two years ago – reached the 50-percent mark last week, Murphy said, basically taking the vessel to what will be its waterline when the ship is finished.

“There is still 40 more feet to build up before we get to the flight deck,” said program director Mike Butler.

Butler and Murphy said issues that cropped up during construction of the Ford led to the implementation of a new way of thinking in building the Kennedy.

Murphy said that more of the units – basically puzzle pieces – are being constructed on dock instead of building them on the ship.

“It’s much more efficient this way and will cut costs,” Murphy said. “The employees are taking great pride in cutting costs.”

The Kennedy will cost an estimated $11.4 billion. But the Ford ended up costing $12.9 million – 23 percent more than the original estimate.

Murphy said the ship’s two largest units already are being started next to the dry dock that contains the Kennedy. The bow will be one of the final pieces of the hull and is expected to be attached in about a year.

When the stern was about five feet from being inched into place, the crane stopped lowering it so that crews could evaluate how close it was to being lined up. All of the parts that were to be attached already were in position on the floor of the dry dock.

Once in line, several workers would attach winches so they could move the unit the last inch or two.

“And it’s all being done on radio,” Butler said. “These guys are talking to the crane operator and our crane guy can thread the needle just on their instructions.

“He does an amazing job.”