Things have not gone well for the Pentagon’s much-criticized acquisition system since the 9-11 attacks. The military got a lot more money for new weapons than anyone could have predicted when the new millennium began, but tens of billions of dollars were squandered on programs that either were canceled or delayed by controversy.

However, there are a few new combat systems that stand out as successes, and the V-22 Osprey tiltrotor is arguably the most pleasant surprise. Tiltrotors are revolutionary airframes that combine the vertical agility of a helicopter with the speed, range and fuel efficiency of a fixed-wing plane. They can land pretty much anywhere, or hover over a spot for long periods, but they fly twice as far and twice as fast as the helicopters they replace.

That makes tiltrotors so versatile that the military services which already own them are rethinking how combat operations should be conducted, and the services which don’t own them are seriously considering how to find room in their budgets for tiltrotor technology. The Navy decided in 2015 to replace aging turboprop planes that resupply its aircraft carriers with an Osprey variant, and now the Army’s medical evacuation community is eying tiltrotors for future missions. 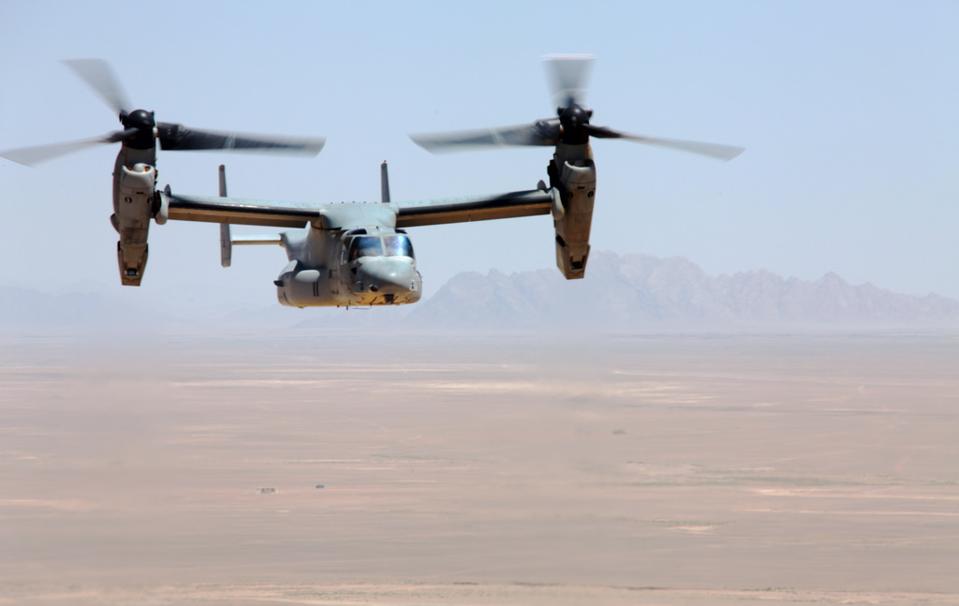 A V-22 Osprey in flight. The aircraft typically takes off with the rotors tilted upward for lift, and then shifts to airplane mode in flight to enhance speed and range. The rotors can pivot to the rear over 90 degrees to enable backward flight.

If V-22 were to gain a foothold in the Army, it would be one of the very few airframes ever to be operated by all four military services grouped within the Department of Defense. But even if it doesn’t, tiltrotor technology is sure to be a contender in the Army’s Future Vertical Lift program, which one day is supposed to replace all the rotorcraft currently used by soldiers. (The V-22 is built by Boeing and Bell Helicopter Textron, both of which contribute to my think tank.)

This is remarkable progress for a program that was so controversial when it first began flying that Secretary of Defense Dick Cheney tried to kill it every year he held the job. Cheney managed to terminate a hundred major weapons programs during his tenure — the Cold War had just ended — but he couldn’t do in the Osprey because Congress and the Marine Corps banded together to protect it. Now, in the tenth year since Osprey first became operational, it is clear they were right and Cheney was wrong.

It’s not just that V-22 enables missions that were not feasible in the past, but it enhances the value of other assets already in the joint force. For instance, the Marine Corps has taken to splitting up its three-ship amphibious ready groups when they deploy because there is a chronic shortage of such vessels for covering security challenges. The speed and range of Marine Corps MV-22s (its Marine designation) make it easier to sustain such dispersed operations since Osprey can quickly fly between the scattered warships even when they are many hundreds of miles apart.

Or consider what the Air Force states in a fact sheet about its own variant of Osprey, CV-22, which is used to insert and extract special operators in dangerous circumstances: “The CV-22 can perform missions that normally would require both fixed-wing and rotary-wing aircraft.” A long-range mission to rescue U.S. hostages in Iran failed in 1980 in part due to the complexity of coordinating planes and helicopters — leading to the development effort that became V-22.

Since it became operational with the Marines in 2007 and the Air Force in 2009, V-22 has proven its value and versatility over and over again, in Afghanistan, in Iraq, in Kuwait, and across much of North Africa. In the latter region, it has been used both to provide humanitarian relief during the Ebola crisis and to rescue downed U.S. fighter pilots during air operations over Libya.

More broadly, it has enabled Marines to operate air-ground task forces from shore locations rather than ships because of the extraordinary flexibility and reach afforded by tiltrotor technology. Marines are often called on to reinforce embassies, rescue noncombatants, and assist local forces on short notice — missions which the MV-22 greatly facilitates. The unrefueled combat radius of Ospreys allows them to reach any place in Iraq, Jordan or Syria from a single central base, something not possible with conventional helicopters.

But that is just the beginning of what might be called the Osprey revolution. As Marines have experimented with Osprey in diverse operations, they have found new ways of using tiltrotors that weren’t originally anticipated. For instance, the Marines will equip several Ospreys with the ability to refuel fixed-wing fighters and rotorcraft in flight, so that their reach can be extended without relying on land-based or carrier-based refuelers. The same capability can be used to refuel forward-deployed ground vehicles that run on aviation fuel.

The Marines are also looking to install additional firepower on Ospreys, so that they can participate in a wider array of operations beyond performing the troop and supply carrying operations for which they were initially conceived (an Osprey can lift up to 32 Marines in a single flight, plus a crew of four). Meanwhile, the Air Force is contemplating use of its CV-22 for combat search-and-rescue missions in circumstances where conventional rotorcraft might be too slow or short-legged.

And the Navy has figured out that resupply of ships at sea would be much more efficient using Ospreys than the combination of fixed-wing planes and helicopters it currently utilizes, because tiltrotors can fly directly to surface combatants rather than having to transfer cargo or passengers onboard carriers from planes to helicopters. Even when an Osprey can’t actually land on a warship, it can hover like a helicopter to lower supplies, and it typically can reach warships in need faster with more payload.

So it isn’t surprising that helicopter pilots in Army medivac units might be eyeing tiltrotor technology as a solution to some operational challenges. It’s hard to beat the versatility of an airframe that can land or hover anywhere, but has twice the speed and range of a conventional helicopter. What often goes unsaid in such comparisons is that Osprey has turned out to be safer than many helicopters — in fact, it is one of the least accident-prone rotorcraft in the joint fleet.

I could go into much greater detail about the V-22’s triple-redundant flight controls, its tolerance for ballistic damage, and other features that enhance survivability. In that regard as in other performance dimensions, the Osprey has turned out to be a huge success — a force multiplier that is probably cheaper than any traditional solution when you factor in its ability to enhance the functionality of other joint assets. The Osprey story proves that patience and imagination can still produce great results, even in our baroque military acquisition system.