As Trump promises a 350-ship fleet, a primer on the U.S. Navy today. 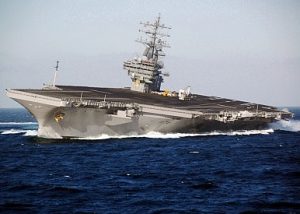 During his campaign, President-elect Donald Trump promised to increase the size of the U.S. Navy to 350 ships. Since the election, senior campaign advisors Alexander Gray and Peter Navarro have laid out what they say his Asia-Pacific strategy will be, a cornerstone of which is the 350-ship fleet. The Navy’s current 30-year shipbuilding plan is designed to grow to a 308-ship fleet, though it doesn’t achieve this goal until the 2020’s and projects that fleet size will drop back below that level for the last 20 years of the plan. Further, even this current plan faces strong challenges, as I wrote about earlier this fall.

As essays appear advocating visions for what Trump’s promised 350-ship fleet should look like, Franz-Stefan Gady recently posed strategic questions about what the Navy should be used for and how many ships it really needs. But to evaluate the coming debate over growing the fleet, it helps to have a baseline understanding of how big the U.S. Navy is today, where it is, what it does, and what it is for. What follows is meant to help orient readers along these lines. In Part II of this series, I will look more closely at the hurdles to achieving an even larger, notional 350-ship fleet.

How Many Ships and Where? To Have One, You Need Three

Normally, about 20 percent of the fleet is deployed at any given time conducting operations around the world. Another third is usually at-sea conducting training in preparation for deployment. And roughly another third is in concentrated maintenance and repair periods that preclude these ships from being able to deploy. The remaining ships are at, or close-to, deployment-ready on a moment’s notice.

Even though the U.S. Navy is expert at refueling and resupplying its warships at sea, without having to pull into a port, ships cannot stay at sea indefinitely. They regularly require repairs and upgrades, and crews inevitably become fatigued (and have homes and families to return to) and periodically require retraining to remain a cohesive and effective team. Practically, this means that for every ship “on station” somewhere in the world, you need two more back home to maintain that presence: the one on deployment, one undergoing repairs, and one in training to take the place of the deployed ship when it returns home to get its own repairs. That repair-train-deploy cycle is currently about 18 months, which includes a seven month deployment overseas.

What is the Mission? Presence, Deterrence, Sea Control, and Power Projection

The stated mission for all these ships is “winning wars, deterring aggression and maintaining freedom of the seas.” The Navy’s mission, as an organization, is to “maintain, train and equip combat-ready Naval forces” capable of doing those things. That distinction is important. In the United States the military branches are “force providers” and not “warfighters.” The Navy maintains the fleet, which is then parsed out to the geographic Combatant Commanders (divided into the Pacific, Europe, Africa, the Middle East, and North and South America), who are responsible for using those forces to achieve the missions assigned to them by the Secretary of Defense and the President. The Combatant Commanders’ demand for warships is high. In 2014, the Chief of Naval Operations testified to Congress that the Navy would need 450 ships to actually fill every commander’s request for forces.

Naval forces provide the Combatant Commanders with four traditional core capabilities (sometimes called missions or essential functions): Deterrence; Presence; Sea Control; Power Projection. Since they were first formally laid out by the President of the Naval War College in 1974 some of the wording and emphasis has evolved; for example, an initial focus on strategic or nuclear deterrence was broadened to include conventional deterrence. Two new missions/capabilities/functions were later added, Maritime Security and Humanitarian Assistance/Disaster Relief. Humanitarian Assistance was later re-categorized, Presence is sometimes dropped, and All Domain Access currently appears in its stead, but the original four ‘high end’ capabilities remain thebasis for U.S. naval doctrine:

Since the end of the Cold War, the Navy’s primary combat mission has been Power Projection, especially through carrier air power and the Tomahawk cruise missile. The Tomahawk gives ships and submarines the ability to precisely hit targets with a 1000-pound warhead at ranges of approximately 1000 miles, without having to risk a pilot flying overhead to drop a bomb. The public first saw these new weapons on display during the first Gulf War in 1991 and the Navy has launched over 2,000 Tomahawks since (about 1,500 were used in operations against Iraq).

With the demise of the Soviet Union, U.S. Sea Control capabilities withered. Starting in the late 1990’s, new surface ships were constructed without a long-range anti-ship cruise missile. The Harpoon missile carried by older cruisers and destroyers is itself a 40-year old design. The rapidly expanding Chinese fleet, armed with advanced anti-ship cruise missiles that are faster and have greater range than the U.S. Harpoon, has generated renewed focus on the Sea Control mission and development of new concepts and improved technologies.

Why do we Need a Navy? Solving ‘the Tyranny of Distance’

The bulk of the U.S. Navy is based on the east and west coasts, but the regions it patrols most heavily are across the Atlantic and Pacific oceans. It takes 10 days to get from the main east coast base in Virginia to the Strait of Gibraltar and another two weeks to reach the Arabian Gulf without stopping. It takes a week to get from the major west coast base in California to Pearl Harbor, Hawaii (itself a base for cruisers, destroyers, and submarines), and another two weeks to reach Japan.

Because of these great distances, the U.S. keeps Forward Deployed Naval Forces (FDNF) hosted in allied foreign countries. It is much easier to maintain a substantial force in strategically important regions if those forces reside permanently in those regions. There they deter aggression, maintain stability, engage and train with partner and ally nations, and are positioned to respond rapidly to emerging crises and provide time for reinforcements to arrive from the United States.

The bulk of FDNF are in Japan, where the U.S. maintains a nuclear aircraft carrier, eleven major surface combatants, and four amphibious ships. Though not an ally, the U.S. plans to keep four smaller surface combatants based rotationally in Singapore, where the U.S. Navy also has a major logistics hub. The other major concentration of FDNF are in Rota, Spain, near the Strait of Gibraltar. The four destroyers based there are part of the U.S. contribution to ballistic missile defense for Europe and to ensure forces are available to respond to crises in Europe, northern Africa, and the eastern Mediterranean.

The U.S. Navy possesses diverse combat capabilities to achieve a variety of missions for the United States, distributed geographically to ensure stability in key regions and respond rapidly to any crisis that cannot be prevented. The Navy’s own analysis has determined that it will need a larger fleet to continue to meet the operational demands placed on it, but it has not yet requested the 350-ship fleet proposed by the incoming administration. In Part II, I will examine some of the risks and challenges such a fleet expansion might face.