Home » Articles » Commentary: Why Putin is unleashing his only aircraft carrier

Commentary: Why Putin is unleashing his only aircraft carrier 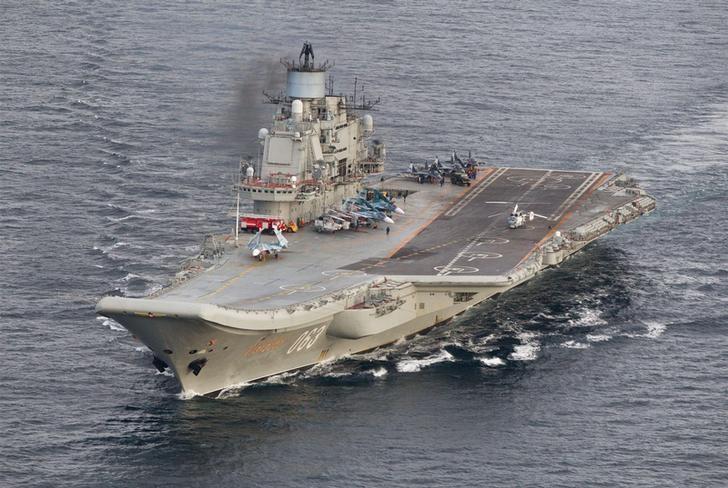 Somewhere in the autumn gales and rain squalls of the North Sea, Russia’s only aircraft carrier is heading south to war.

According to Russia’s TASS news agency, the Admiral Kuznetsov aircraft carrier and seven more vessels sailed Saturday from the Northern Fleet’s Arctic headquarters of Severomorsk. It’s the eighth time the ship and its escorts have made the journey to the Mediterranean, a trip that has become a key part of Russian President Vladimir Putin’s strategy to reassert Moscow’s naval strength and reach.

This deployment, though, is very different. Moscow has spent considerable resources over the last decade developing the ability to conduct operations from the carrier, launched in the dying days of the Soviet Union. But unlike its U.S., French, British and Italian counterparts, it has never used the ship in anger. That’s about to change. Perhaps within as little as two weeks, its SU-33 and MiG-29 jets will be slamming ordinance into downtown Aleppo and other parts of Syria.

On one level, the Kremlin has no particular need to use carrier-mounted aircraft. If it wanted to increase the number of aircraft operating over Syria, it could simply send more ground-based jets to Syrian President Bashar al-Assad’s airfields.

Sending the carrier and its escorts is in many ways a much more expensive and complex way of achieving the same thing. Nor is it without risk – in the past, Russia’s warships have sometimes shown an alarming tendency to break down, often traveling with their own oceangoing tugs.

Moscow clearly wishes to show that it can emulate Washington by sending a task force thousands of miles and then conducting weeks or months of military activity – an exercise that will highlight Russia’s renewed military capability. It will further complicate the political calculus for the United States and others when it comes to finding a way forward in Syria. And, of course, it offers a neat opportunity to remind a host of countries in northern Europe that Moscow cannot be ignored.

On previous passages through the North Sea, the carrier has deliberately operated jets and aircraft close by Norwegian oil platforms, an act of intimidation that forced nearby civilian helicopters to be grounded. This time, there are reports the carrier may conduct bombing exercises in international waters north of Scotland.

Royal Navy warships will shadow the Russians as they pass down the coast and through the English Channel, a move that will likely attract considerable media coverage on both sides.

Russia’s senior naval commanders will be hoping this deployment strengthens their hand in face-offs between branches of the military. Until now, most of the glory in recent military campaigns – Ukraine in the last two years, Georgia in 2008, Chechnya, or now Syria – has gone to ground and air forces. Now they can showcase themselves – as well as building the necessary skills and capabilities to develop a truly enduring carrier strike capability.

With Russia maintaining a permanent naval presence off Syria since 2013, the United States and its allies were already keeping track of exactly what the refurbished Russian Navy could and couldn’t do. China, too, will also unquestionably be interested – its first aircraft carrier, Liaoning, was originally the Soviet Varyag, sister ship to the Kuznetsov.

Both Moscow and Beijing have plowed considerable resources into weaponry to take out U.S. carriers – indeed, developing such technology has been at least as important to them as getting their own aircraft carriers operational. U.S. officials, however, say that latest generation of anti-ship ballistic and cruise missiles remain largely unproven.

The United States and its allies have their own tools to take out enemy carriers – and, decades more experience practicing such tactics. The U.S. Navy might be spread thin across the globe, but it could still put together enough combat power – be it in submarines, surface warships or land-based aircraft – to do the job.

It wouldn’t be easy. The main focus of the Kuznetsov battle group may be hitting targets on the ground in Syria, but it is also relatively capable of defending itself against maritime foes. The carrier is also reported to be carrying up to a dozen antisubmarine helicopters, making it much harder for any NATO submarine to sneak in close. According to Russian media, the group also contains the battle cruiser Peter the Great as well as two anti-submarine warships. They too could be sunk – but would almost certainly take NATO warships with them.

Russia’s sailors might be new to carrier strike operations, but they are also the only navy to have fought with anti-ship missiles since Britain went to war in the Falklands in 1982. During the 2008 war with Georgia, a selection of Russian warships and Georgian counterparts are believed to have tangled in brief but bloodied battle, the details of which remain largely opaque. What is clear, however, is that casualties on both sides were high, at least in proportion to the number of relatively small ships involved.

All of this feeds back into the battle on the ground that counts – that for the future of Syria in general, and Aleppo in particular. Already, the United States knows that halting the onslaught of Russian and Syrian forces might well take military action – at the very least, shooting down a handful of aircraft or targeting airbases.

Now it might also mean a cataclysmic offshore battle with the pride of the Russian Navy. Which, of course, is why it almost certainly won’t happen, under this administration or the next.