Editor’s note: The following is an opinion piece. The writer is not employed by Military Times and the views expressed here do not necessarily represent those of Military Times or its editorial staff.

It is no secret that Marine Corps Aviation has always taken a back seat to the ground side. Marine Corps infantry units have historically been “first to fight” since the Continental Congress drafted a resolution in 1775 calling for two battalions of Marines able to fight for independence at sea and on shore.

Our heritage and traditions support this “newcomer” way of thinking toward aviation, but in reality, close-air support has saved thousands of Marine riflemen’s lives, provided transportation into and out of battle zones, not to mention resupply and medical evacuation missions. With that said, even the most hardened grunt believes the ground/air teams need each other in order to be successful on the battlefield.

But this disparity, however it manifests itself in the minds of individual Marines, is not the biggest issue within the ranks of the Marine aviation community. Rather than say that morale is at an all-time low, I would rather say that Marines are disappointed, disenchanted or disheartened. Aviation military occupational specialty re-enlistments are down 20 percent. Why is that and what are we going to do about it?

Aviation maintenance departments are being asked to do a lot more with far less than in the past. Qualified mechanics and parts availability are down precipitously, yet squadron commanders are encouraged to keep readiness rates up. That leads to longer working hours that result in less time with family and less time for professional military education. It also leads to a greatly reduced cadre of “qualified mechanics.” The tables of organization may be filled, but they are sometimes filled with unqualified trainees. Training new mechanics requires a qualified mechanic to spend more time on a repair resulting in a higher maintenance repair costs to flight-hour ratio, thus fewer aircraft ready for flight.

Aircrew training is even more difficult and far more extensive; it takes two and a half to three years to become an enlisted weapons and tactics instructor. Therefore there are few first-term Marines who are WTI qualified. This makes re-enlistment rates even more critical. WTI provides instruction and training stressing integrated air-to-air and air-ground combat operations. Intended for experienced Marines, the WTI course is an advanced, graduate-level course for select fixed-wing, rotary-wing and tilt-rotor pilots and enlisted aircrew from the Marine aviation community.

The cost of this seven-week training course at Marine Corps Air Station Yuma, Arizona, is estimated to equal the cost of a college education. When flying tactical missions, the roll of the enlisted WTIs is equal to that of the pilots. And yet some senior enlisted, without benefit of aviation experience, do not grasp the criticality of the total crew concept.

While the cost of new aircraft takes a huge bite out of the overall budget, there is little money left for parts and fuel. Last month’s  2016 Marine Corps Aviation Plan pointed out the futile efforts to keep the Corps’ fixed-wing aircraft and helicopters flying and its pilots trained. Reduced flight hours have a direct correlation to combat readiness and increased mishap rates. Until adequate funding levels are renewed, this will continue to be a huge problem for Marine Corps Aviation.

The answer is not to curtail operational commitments; this, in and of itself, reduces combat readiness. A pilot should fly 20 to 30 hours a month in order to remain current with his or her skills, and more hours to increase those skills. Many enlisted crew chief hours are exceeding that of pilots due to a shortage of qualified crew chiefs. I hope that the Defense Department, in all of its wisdom, will not reduce standards in order to make the numbers look good. 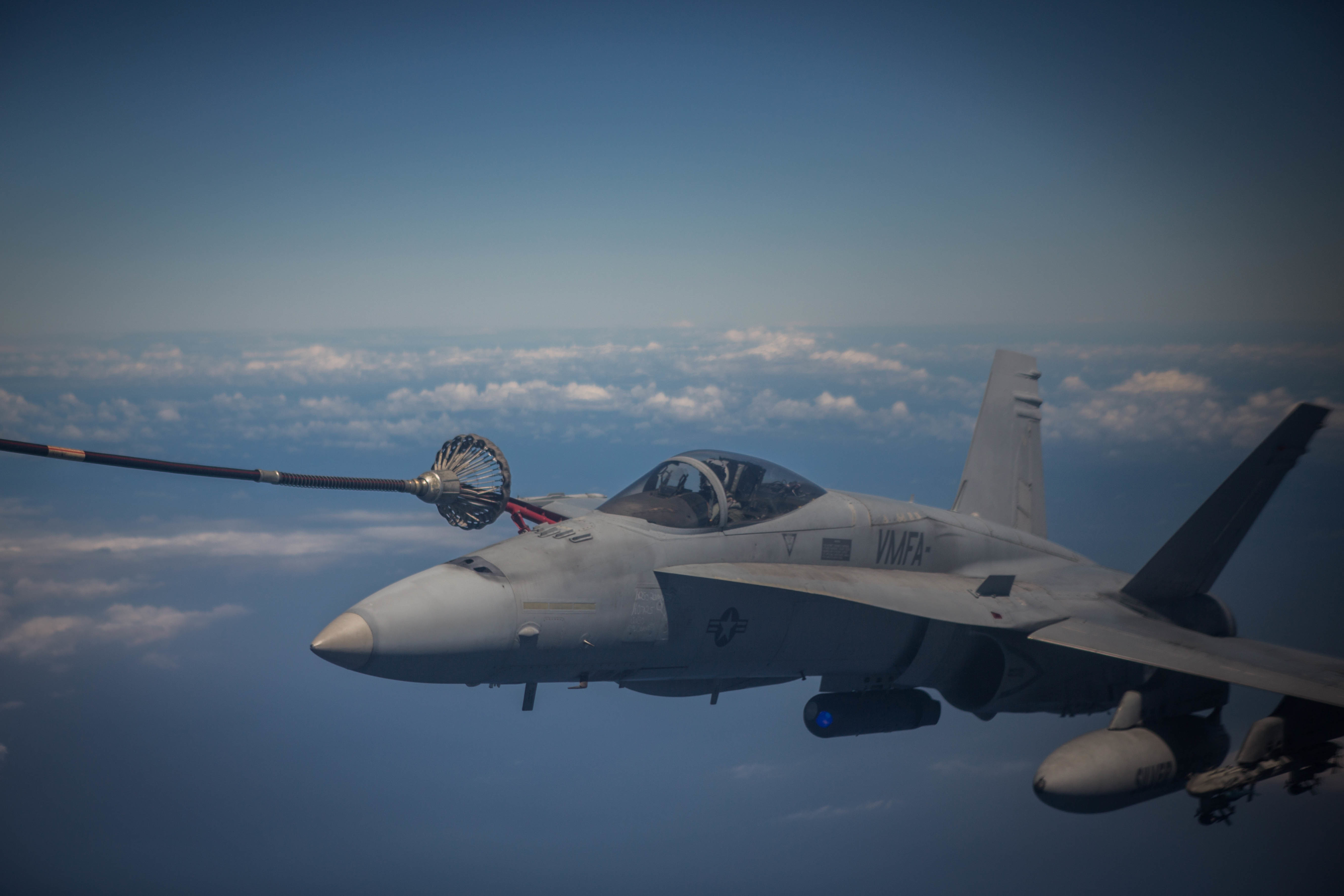 An F/A-18 Hornet receives aerial refueling during the Rim of the Pacific exercise near Hawaii on July 25.Photo Credit: Lance Cpl. Miguel A. Rosales/Marine Corps

The operational tempo is bludgeoning both people and hardware. It is also taking a great toll on the airframes. For example, the F/A-18 has served beyond its expected lifespan while continuing to fly, but only with an increased ratio of maintenance hours to flight hours, resulting in maintenance costs far above those budgeted. Other aging airframes have run out of parts.

The 2013 mandatory budget cuts known as sequestration greatly damaged readiness rates, with an overall 20 percent shortfall in the number of aircraft required to meet readiness standards. The 2016 Aviation Plan implies that “they” are striving to increase the number of “Ready Basic Aircraft” (aircraft without all of the bells and whistles necessary for combat ops). It looks like there is a built-in fudge factor hoping for a golden egg to land in their lap.

The requirement that all Marines are first and foremost riflemen is an important concept. War is as much about supporting defensive positions as it is about maneuver warfare. While aviation Marines are not tasked with making amphibious landings or ground assaults, they must be ready to defend their position in the event of a surprise enemy attack on an air base.

Case in point: On Oct. 28, 1965, 90 Viet Cong fighters attacked the Marine Corps air facility at Marble Mountain, Vietnam, under the cover of 60mm mortars, Bangalore torpedoes and hand grenades. The air-wingers fought back, killing 41 of the attackers while suffering the loss of two Marines and one Navy corpsman. Another example: On Sept. 14, 2012, the Taliban conducted a raid on Camp Bastion in Afghanistan’s Helmand province. The entire raiding force was either killed or captured. I experienced raids on the Phu Bai airfield in Vietnam, and I can say without equivocation that it was every man for himself. There was no planned defensive scheme based on prior infantry training.

All of that said, Marines with aviation MOSs are required to complete the same PME courses that infantry Marines are required to complete in addition to their own training requirements. These PME courses, in part, have nothing to do with their day-to-day jobs. For example, for an aviation mechanic sergeant to be promoted to staff sergeant, he or she must complete the Sergeants Course Distance Education Program, which consists of nine subcourses, some of which will be helpful to all Marines such as: administration, communication, training and leadership. But, warfighting, tactical planning and tactical tools are lost on aviation Marines. There is little to no opportunity to train, using these tools once learned, and there is no practical application for them. 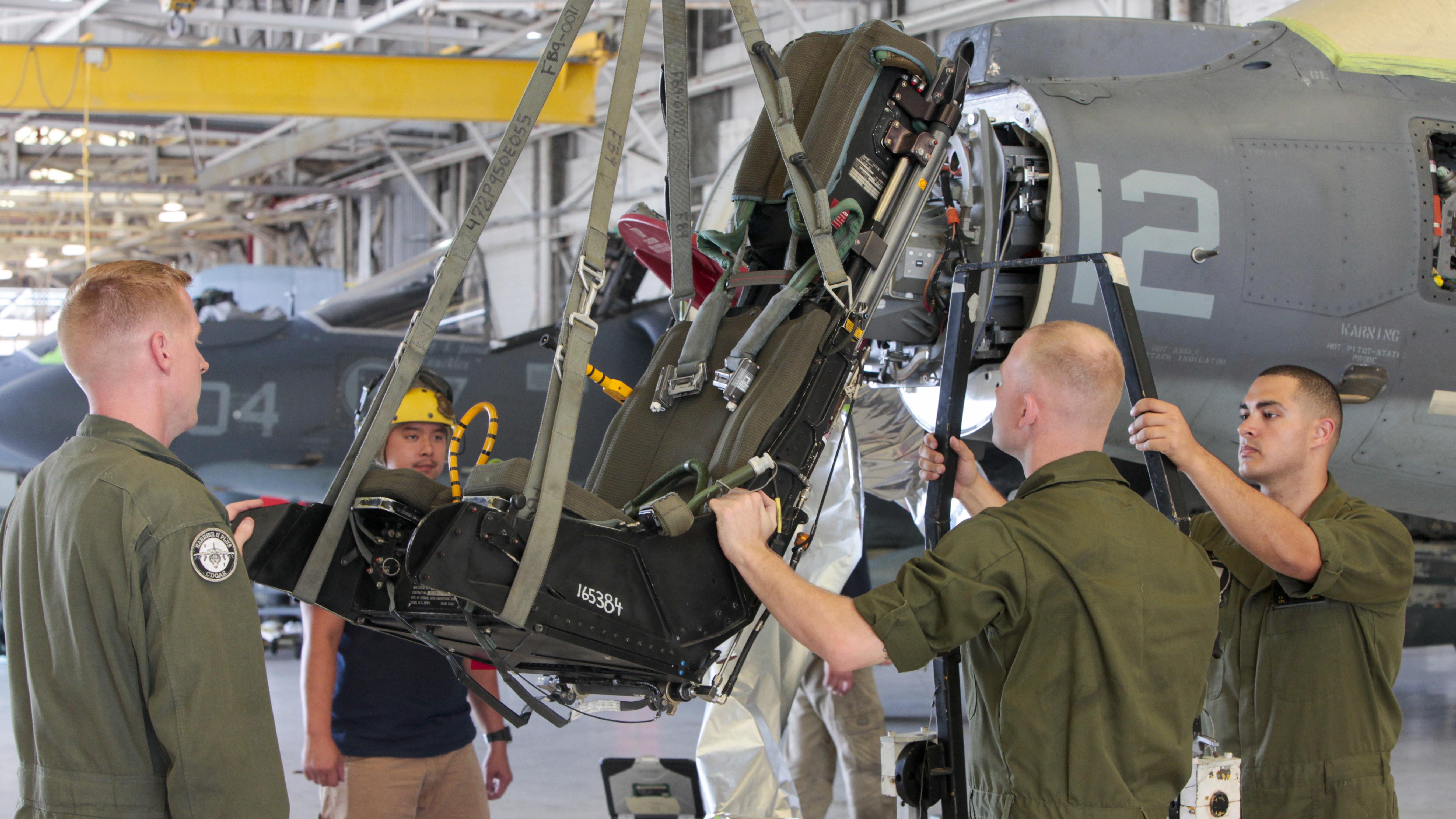 There also appears to be issues with some members of leadership who were raised in the grunt community then transferred to aviation units. They don’t seem to respect the qualifications required to advance up the maintenance and aircrew ladders. The training syllabi for a mechanic to become a certified collateral duty inspector then advance to a quality assurance representative require extensive after-hours study. QAR’s have a critical responsibility to sign off aircraft safe for flight. That doesn’t even take into consideration the additional required qualifications over and above A-school in order to do just their basic job.

The Marine Corps has always prided itself on two things: “We train like we fight” and “We can do more with less.” But we are rapidly losing our edge in both cases. Let’s face it; Marine Corps Aviation is in trouble. Marine Corps Commandant Gen. Robert Neller tells us that he has a plan to “fix it,” such as getting new aircraft, like the MV-22B Osprey and the F-35B. He also stresses the need for more flight hours to keep pilots and aircrew qualified. Those are all well and good, general, but how about giving us the resources to take care of the aircraft that we have and that we task Marines daily with maintaining?

Aviation funding still remains the holdup. The precious resources that the Marine Corps does have are going to retrofit ground units such as Marine Corps Forces Special Operations Command and reconnaissance with little left over for aviation. Yet we are wasting money to integrate the LGBT community in the Corps; requiring barracks reconfiguration and moving forward not just with integrated barracks, but integrated rooms.

Did our job description change and nobody tell us? Is this all about fighting and winning wars to protect the homeland, or being politically correct? We cannot have both. When are we going to stop allowing the liberal lawyers and progressive politicians run our military? We must elect officials who put the safety and security of this nation first and are not afraid to make cuts to social giveaway programs.

We must do a better job of listening to our enlisted aviation Marines. I thought the Corps adopted the concept of bottom-up leadership. When it comes time to re-enlist, there are no bonuses or incentives of any consequence and esprit de corps only goes so far.

We must find out how we can help make the mechanic’s jobs more efficient, thereby more cost-effective and keep our aircraft flying. We must provide them with the tools and equipment necessary to do that job. When senior enlisted leadership, with a history of infantry ops, transfers into an aviation unit we cannot simply assume that they know how things work in maintenance. Aviation Marines have a different mindset from infantry Marines. It cannot be all about warfighting skills and physical training. This concept must be thoroughly reexamined.

Training should focus on the job at hand and not on some antiquated notion that we should all be grunts; rifle skills notwithstanding. A flight-line mechanic’s job is just as important as a fire team leader’s job, both requiring unique skills. In order to lead Marines, you must first understand what it is they do!