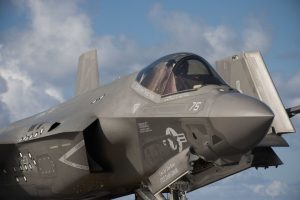 The United States Navy is confident in its ability to operate nuclear-powered aircraft carriers (CVN) and their air wings inside zones protected by anti-access/area denial (A2/AD) weapons.

The service expects that the massive ships and their escorts will be able use their combination of speed, maneuverability and defensive capabilities to fight while under fire from enemy anti-ship cruise and ballistic missiles. Meanwhile, the carrier air wing (CVW) will rely on the Lockheed Martin F-35C Joint Strike Fighter, the forthcoming unmanned MQ-25A Stingray aerial refueler and its fleet of Boeing F/A-18E/F Super Hornets and EA-18G Growler electronic attack aircraft to defeat advanced enemy air defenses such as the Russian-built S-300 and S-400 families.

“I’m confident—in an unclas environment—the ability to maneuver in a contested environment, create a battle space to do what we need to do, maneuver again and operate—not with impunity—but certainly with awareness of the risk that’s out there,” Vice Admiral Mike Shoemaker, commander of Naval Air Forces told an audience at the Center for Strategic and International Studies in Washington on Aug. 18.  “I often see the lines of the DF-21 drawn on a map, given a PK of 1.0—which means it going to work all the way through out there. That’s a very long kill-chain…We have lots of things we do to disrupt that from all angles.”

The Navy plans to use the carriers’ speed and maneuverability to make the massive vessels—whose size belies just how fast they really are—difficult to target. Essentially, the Navy will use a combination of measures to create “sanctuaries” at sea that would allow the carrier strike group to fight in an A2/AD environment. “If you’re not maneuverable, you’re not relevant,” Shoemaker said—he further added that he would be confident of sending his own children into battle onboard a carrier against such a threat. “I’d be very confident that they’re in a good spot because of our ability to maneuver, the things we’re practicing and the capabilities we’re delivering in that integrated air wing, ship and strike group moving forward.”

The F-35C and the MQ-25 will be the keys for naval aviation to operate against advanced threats in the post-2025 environment, Shoemaker said. However, the composition of the air wing will not markedly change by then, but the service might add “a few” additional Growlers and Northrop Grumman E-2D Advanced Hawkeye airborne early warning aircraft to the flight deck, Shoemaker said. The additional aircraft would take the place of the six to eight tanker-configured Super Hornets, which may no longer be needed as new “Magic Carpet” aircraft landing technology improves the recovery rate of carrier-based jets.

The service will also need to understand how to incorporate the MQ-25 into the air wing. “As I look to 2025 and a little bit beyond that, the composition is good,” Shoemaker said. “The weapons that we’re delivering give us that expanded reach when you fly to the ranges—and maybe even do some refueling—but out to the range of our platforms and then add on a missile that gives us the ability to touch something well beyond the reach of what we did in the past.”

However, the problem with long-range standoff weapons is that while they are excellent at destroying fixed targets, they have traditionally been less useful against moving or pop-up targets. Thus, the Navy will have to rely on its Naval Integrated Fire Control Counter Air (NIFC-CA) battle network to find and identify targets for its long-range weapons in real time. The F-35C will likely be the platform that will perform the lion’s share of the critical task of combat identification of targets inside hostile airspace. “The key piece is that long-range combat ID,” Shoemaker said. “We’ve got to make sure we’ve got that right.”

The addition of the MQ-25—which will be a mission tanker—could also be key to extending the range of the air wing, Shoemaker said. Mission tanking in the Navy content means that the Stingray will have to be built with enough internal fuel carriage to offload between 25,000lbs and 30,000lbs of fuel. Essentially, the idea would be for the MQ-25 to fly out ahead of the strike package and then refuel the fighters while they are enroute to their target or as they egress back toward the carrier.

Shoemaker said that unlike the now-defunct Unmanned Carrier Launched Airborne Surveillance and Strike, survivability is not high on the list of priorities for the new aircraft, however the service is trying to balance between the jet’s intelligence, surveillance and reconnaissance mission and refueling—which is an engineering challenge. Nonetheless, the aircraft might have some stealth capability by default. “If you look at where we’ve been with many of the industry partners, there are some shapes that they have designed already that help in that survivability piece,” Shoemaker said.

It remains to be seen if the Navy’s plan for the carrier and its air wing will work. Most of the Washington national security establishment is deeply skeptical. There are many prominent voices calling for the service to start working on a long-range carrier-based strike platform to ensure that the carrier remains relevant into the indefinite future.

Dave Majumdar is the defense editor for the National Interest. You can follow him on Twitter: @davemajumdar.