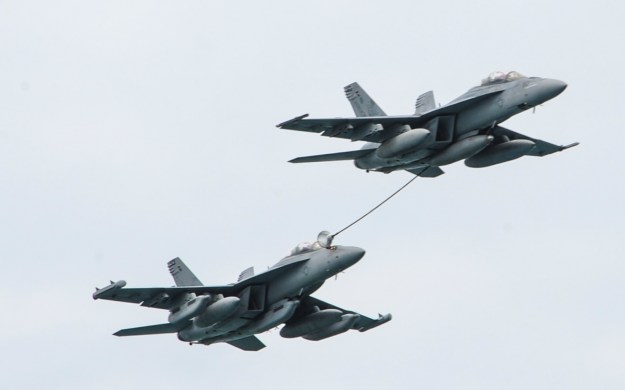 The Navy’s reconfigured unmanned carrier aviation program is set for success because it has a “legitimate” primary mission in the short-term but will be designed in such a way that doesn’t preclude it from taking on additional missions later, the Chief of Naval Operations said Friday.

Speaking at the American Enterprise Institute, CNO Adm. John Richardson said the newly redesignated Carrier Based Aerial Refueling System – formerly the Unmanned Carrier Launched Airborne Surveillance and Strike (UCLASS) program – will help ease the burden on the F/A-18E/F Super Hornet fleet, which is struggling to get out of a readiness trough, by covering the tanking mission.

“The tanking mission will liberate five or six aircraft, strike fighter aircraft, that are doing tanking missions right now. They’ll be off doing strike fighter kind of missions,” Richardson told reporters during a roundtable after his AEI talk.
“So there’s a real benefit there. It extends the range – it depends on how you employ them, you can just imagine, you don’t have any pilot fatigue in that tanker so there’s all sorts of benefits to doing that.”

Today, some Super Hornets take on several additional sorties a day to refuel other aircraft in the carrier air wing, pushing the already-stressed fleet closer to the end of its service life.

Whereas the UCLASS program had a somewhat contentious history, with lawmakers and Pentagon and Navy leadership disagreeing over how to balance the surveillance and strike missions included in the program’s name, Richardson said he thought the CBARS program would be successful because it has a well-defined and “legitimate” mission today – though he said that the mission envelop could expand overtime, and the name would be changed eventually.

“We kind of revamped our strategy there with UCLASS, now CBARS – I’m not sure I’m too much in love with that CBARS name, we’ll come up with something better than that – so we’re looking at something that we can get there,” he said during the AEI event.
“It has a legitimate role in terms of tanking, and I would say that [intelligence, surveillance and reconnaissance] is on the table for sure. We’ll free up tactical aircraft by virtue of taking on that mission, but even more important, we’ll learn how to integrate unmanned aircraft into our air wing. What does that mean, flying on and off the carrier? There’s just so much to learn now, and I want to get after that. In the mean time, the decisions that we make now, we’ll do our very best not to preclude increasing the platform’s capability in other areas as technologies become available, as we learn those lessons and we kind of grow into that. But I think there’s just so much to learn right now, I’m eager to get started.”

He reiterated his point to reporters afterwards, saying that centering the unmanned plane around the tanking mission might help get the program through acquisition and onto the flight deck faster.

“I’m pretty confident that if we sort of define this program right, and we go into it with sort of an end in mind – that might include all of the above, we certainly wouldn’t want to preclude anything – but let’s get something on deck, as I said in the last session, where we can start to learn about integrating unmanned aircraft into the air wing,” he said.
“We don’t want to preclude future opportunities, so that’ll be an important part of the process is that we have a path into the future that wouldn’t preclude all of those things that everybody wants – I want them as much as anybody – but I just think that right now we stand to benefit a lot by getting something on deck. A real mission – this is not just a prototype that’s going to go up and do nothing – and we learn a lot there and we see what the future holds.” 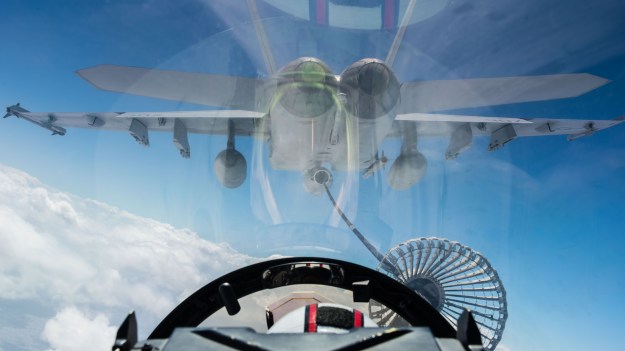 Regardless of whether CBARS eventually takes on ISR or strike missions, the tanking mission will provide immediate relief to the struggling Super Hornet fleet. The legacy Hornets have taken longer than expected to get through depot maintenance and back out to the fleet – when planes came in for a service life extension program, more extensive wear and tear was found and the SLEP program had to be modified. With the legacy planes slow to come through the depots, the newer Super Hornets have not only taken on more strike missions than planned to keep up with operational needs, but they’ve been the sole source of aerial refueling during carrier strike group deployments. USNI News understands that as many as 20 to 30 percent of Super Hornet sorties are tanking missions.

Fielding a CBARS plane quickly would buy the Navy a bit more time before sending in the Super Hornets for a service life extension program of their own. The first Super Hornets will reach the 6,000-hour point this year, marking the end of the planes’ expected service life, and with the depots still backed up with legacy Hornets, Navy aviation faces a real challenge to maintaining required readiness levels.

In the Fiscal Year 2017 budget request that was released earlier this week, naval aircraft depot maintenance is funded at only 83 percent of the Navy and Marine Corps’ needs.

“In FY 2017, readiness levels of deployed units and units training in preparation to deploy will be attainable; however, the readiness of non-deployed units remain below entitled levels due to the effects of F/A-18 A-D Legacy Hornet Out-of Reporting (OOR) caused by aviation depot throughput challenges and the Ready Basic Aircraft gap caused by flight line maintenance and material support issues,” according to a Navy budget highlight book.
“The intent of FY 2017 funding is to ensure appropriate predeployment/deployment funding levels while recovering from the above issues by realigning funding into engineering and program-related logistics, increasing engineering support to aviation depots and flight line assessments of aircraft to speed the repair process.”

“If you picture sort of a bell curve in training, so you train up, you go on deployment at the highest level, and then you walk back down again, that bell curve has gotten steeper. So we’ve taken the readiness out of the front end (in basic phase pre-deployment training) and the back end, where you sustain the readiness,” Manazir said.
“That means that a significant part of our force that is shore- based, in training and not deployed yet, is experiencing a lot less flight time than they’re required to spend.

“We’ve had to shut down squadrons if they don’t have enough time in the air. We create a floor of flying hours at 11 hours a month – we call that our tactical hard deck – for a pilot in the United States Navy, and we say, if you can’t get 11 hours per month you are not proficient and current enough to remain safe in the airplane. And so we — we try to get that 11 hours per month,” he continued.

Davis said at the hearing that the low level of flight hours could cause a retention problem in the Marine aviation community.

“I also worry about my pilots leaving the Marine Corps because they’re not getting enough flight time. These are the best and brightest that our nation’s produced. … Great young people, they joined to fight; they joined to be good at what they do,” Davis said.
“It’s like a quarterback. All the great quarterbacks want all the snaps. Our pilots want all the snaps. A F-18 pilot in the Marine Corps should get 16 hours of snaps a month and he’s getting 10.”