Home » Articles » Why Are We So Afraid of Small Carriers?

Why Are We So Afraid of Small Carriers? 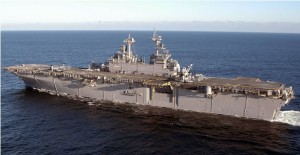 The “aircraft carrier” designation has become a bit of a joke among defense commentators on Twitter, with one Popular Science writer deciding to avoid controversy by referring to everything from the Japanese Izumo to the USS Nimitz as a “floaty movey flyer holder.” The definitional becomes more significant when we range beyond the relatively small community of defense and aviation specialists, and try to explain to the laity why a 45,000-ton ship that carries supersonic jet fighters is not, in fact, an “aircraft carrier.”

Bryan McGrath’s response to an earlier article on ship designations has some excellent points, and opens the door to a more rigorous way of classifying ship capabilities. However, McGrath’s argument still leaves much to be desired.

How Much Does the Air Wing Matter?

McGrath argues that the distinction between “aircraft carrier” and “something else” should depend on an evaluation of the ship’s air wing.  Of the flat-decked aviation ships in U.S. Navy service, only the aircraft carriers can manage large scale, prolonged air operations with sufficient support aircraft to have decisive effect.  These support aircraft include aerial early warning (AEW) and electronic warfare aircraft, as well as a suite of other aircraft associated with rescue, replenishment, anti-submarine warfare (ASW), and so forth. The big amphibs, even if they carry a couple squadrons of Harriers or F-35Bs, can’t come close to the capabilities of a Nimitz or Ford-class carrier air wing.

This distinction is sensible, and goes some distance towards creating a framework for thinking about the differences between aircraft carrying ships.  However, it also suffers from one glaring problem. Under the constraints that McGrath offers, the only aircraft carriers in the world are the U.S. Nimitz-class supercarriers and (perhaps) the French Charles De Gaulle.

China’s Liaoning, Russia’s Admiral Kuznetsov, and India’s Vikramaditya all depend on ski-jumps for launching fixed wing aircraft, which similarly precludes them from operating command and control and support aircraft. Each of these countries all operate some variant of the Ka-31 airborne early warning helicopter, whose capabilities dramatically trail those of the dedicated E-2 Hawkeye used by the U.S. and French navies. Under the rubric of McGrath and others, the lack of command and control aircraft and the reliance on the Ka-31 would be enough to conclude that China, Russia, and India operate no “real” aircraft carriers.

The Brazilian Sao Paulo (when it sails at all) does not operate sufficient fixed wing support aircraft to earn the aircraft carrier distinction. Smaller carriers operated by Spain, Italy, and others don’t even come close. Even the Royal Navy’s two new 60,000-ton carriers, HMS Queen Elizabeth and HMS Prince of Wales, will struggle to operate the sort of air wing that McGrath argues is necessary to earn the term “aircraft carrier.”

This leaves us in an awkward position.  If we accept McGrath’s argument, the United States operates ten carriers, the French one carrier, and the rest of the world none at all.  Words should be useful to us, and it should go without saying that we create definitions for utilitarian purposes.  Constraining the definition of “aircraft carrier” so tightly that it only applies to one or two classes of ships (and perhaps a few more in historical context) makes it almost useless from a comparative or analytical standpoint.

History of the Term

At this point, some history of classes under consideration would help. Historically, the U.S. Navy has been comfortable with the idea that different aircraft carriers could support different wings with various purposes.  During World War II, the U.S. Navy employed the CV, CVL, and CVE designations in order to distinguish between fleet carriers, light carriers, and escort carriers. While the wings allocated to fleet and light carriers differed mostly in size rather than purpose, CVE wings concentrated on ASW and assault missions.

During the Cold War, the Navy continued to operate a wide array of carriers, including not only the Forrestal and Kitty Hawk supercarriers, but also the legacy Midway and Essex classes.   The latter, available in some numbers, were diverted to a variety of tasks including assault and anti-submarine warfare.  The Navy developed an array of designations, including CVA (attack carrier), CVS (anti-submarine carrier), CVAN (nuclear attack carrier) and so forth.  These ships, which ranged significantly in size and capability, carried very different air wings, although almost always with some combination of helicopter and fixed-wing.

Indeed, the first amphibious assault ships were the converted Essex-class carriers USS Boxer, USS Princeton, and USS Valley Forge, all of which were re-designated LPH (landing platform helicopter) after receiving extensive internal modifications.  These carriers – which had never been modified with angled flight decks – gave up their fixed wing aircraft in favor of helicopters, and were configured for amphibious operations.  Experience with these ships helped inform the first dedicated aviation-oriented amphibious assault ships, the 18,000-ton Iwo Jima class.

The converted Essex carriers and the Iwo Jimas formed the core of the Marine Corps’ vertical envelopment doctrine, in which amphibious assault would involve simultaneous attack from the sea and from the air.  The 40,000-ton Tarawa-class amphibious assault ships added a well-deck to facilitate amphibious landings.

The divergence between CV and LPH was brief, as the carrier and the assault ship began to converge again when Admiral Elmo Zumwalt pushed the concept of the Sea Control Ship, a light carrier that could conduct ASW and limited air defense against Soviet attacks on transatlantic shipping.  The guinea pig for the concept was USS Guam, an Iwo Jima-class LHD equipped to fly Harrier jump jets for two years in the 1970s.

Although the Sea Control Ship never took off as a specific type with the U.S. Navy, the idea spread to several European navies.  The Royal Navy famously flew Harriers from HMS Hermes and HMS Invincible for fleet air defense in the Falklands War, providing proof of concept.  Small carriers built for the Spanish and Italian navies carry a mix of Harriers and helicopters, allowing them to perform a variety of missions.

Instead of building a dedicated Sea Control Ship, the U.S. Navy simply turned its big amphibs into small carriers. The Tarawas furthered the experiment with USS Guam by regularly carrying a squadron of six Harriers. The Wasp-class normally carries a complement of six Harriers, but can carry up to twenty-four if requirements demand. The 45,000-ton USS America and her sister, USS Tripoli, can carry at least as many, and because of the lack of a well deck is optimized for flight operations (although later ships in the class will retain well-decks).

In short, the U.S. Navy has a long history of experience with carriers of different sizes that carry air wings of different capabilities.  The distinction between fixed-wing and rotary prompted a change in designation in the early 1960s, and the development of the dedicated assault ship with well-deck furthered this change.

However, with the regular deployment of advanced fixed-wing aircraft to amphibs, this distinction has become more confusing than helpful. The Harrier was an effective aircraft for its day, and still flies (in two variants) off U.S. and Indian carriers. However, the F-35B takes the STOVL fighter concept to an entirely new level, for the first time providing small carriers (or Sea Control Ships) with a competitive, advanced, supersonic fighter aircraft. The Navy’s amphibious assault ships of the future will be expected to perform amphibious assault, fleet air defense, ground support, and anti-submarine missions.  They just won’t perform them as effectively (with the exception of amphibious assault) as a supercarrier.

What Is an Aircraft Carrier?

Aircraft carriers are big, flat-decked ships that carry airplanes.  With lifespans that run three decades or more, we expect these ships to carry a variety of different aircraft during their careers, and even (as strategic requirements change) to operate air wings with purposes fundamentally different than first intended.  The flexibility of the aircraft carrier is central to its long-term strategic utility.

And so why are we having this argument?  The Navy doesn’t like to answer the question “Why do you need ten carriers, when the closest competitor (NATO ally France) only has one?” The answer to that question is complicated and susceptible to easy distortion.  Moreover, the definition matters for the statutory reasons  that McGrath points out.

There’s no question that McGrath and others are correct that the Wasp and the America cannot perform the missions of the fleet as effectively as a Nimitz or Ford-class ship. But even allowing that big amphibs can to a significant extent conduct many of those missions that CVNs now perform threatens the case for the big carrier fleet.

This leaves us in an awkward situation, where the Navy sails a fleet of flat-decked aircraft carrying warships that will soon fly one of the most advanced tactical fighter jets in the future, and that are comparable in size and capability to the largest “aircraft carriers” that any other navy has to offer.  And yet for bureaucratic and public relations reasons, we can’t call these warships “aircraft carriers,” even though they perform many of the missions that aircraft carriers execute, and in time of war would be expected to shoulder much of the burden placed on the larger carrier fleet.

There’s a danger in this, and the danger can’t be avoided by pretending that the CVL fleet aren’t carriers.  At some point, cost-sensitive members of Congress may determine that the USS America and the USS Tripoli are carriers, perhaps after a junket that demonstrates the capabilities of the F-35B.  If that happens, the statutory commitments may become less of a defense of the Navy’s supercarrier fleet than they appear today.

Robert Farley is an assistant professor at the Patterson School of Diplomacy and International Commerce. His work includes military doctrine, national security, and maritime affairs. He blogs at Lawyers, Guns and Money and Information Dissemination and The Diplomat. Follow him on Twitter:@drfarls.