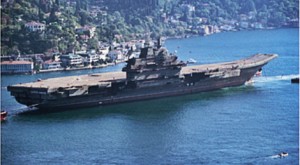 The United States Navy is the envy of every other navy in the world. They don’t want to be like us—they want to be us.”  – Admiral Leighton Smith

This past week, Sino-Vietnamese tensions rose as China moved a deep-sea drilling rig into disputed areas and began earnest exploration for oil. Coming in the wake of President Obama’s visit to Asia, this suggests that Chinese assertiveness has not been deterred by the American pivot, but, rather, has accelerated. Of particular note to the Chinese may have been President Obama’s decision to personally underscore the American commitment to Japan, specifically the disputed Senkaku Islands.

The President’s visit occurred against the backdrop of a growing Chinese naval aviation capability, most prominently embodied by the new Chinese aircraft carrier Liaoning. Indeed, as with the J-20 test on the eve of Secretary of Defense Robert Gates’ visit, and the J-31 on the eve of Secretary Panetta’s, Beijing unveiled the J-15 just before Secretary Hagel arrived in China. This new fighter is intended for carrier operations. The Chinese reportedly began large-scale production of this aircraft late last year.

Since the J-15′s sea trials in 2012, the Chinese have developed carrier operations more rapidly than many had predicted. There have been several conventional landings and take-offs from the carrier, rather than just “touch-and-go” landings as had been predicted. Similarly, the Chinese decision to begin serial production of the J-15 suggests a program that has already completed trials and test-flights. Meanwhile, the Liaoning has also undertaken coordinated operations with escort vessels, reflecting the Chinese understanding that carriers do not operate alone, but in conjunction with escorts and other vessels. Indeed, one report suggests that the Chinese assembled not only surface escorts (two destroyers and two frigates), but also amphibious ships and even submarines—a very potent group of vessels more closely resembling a combined expeditionary strike group than just a carrier group.

China’s interest in aircraft carriers was never expected to be limited to the Liaoning, a vessel originally built for the Soviet navy that eventually passed into Chinese hands by way of Ukraine. Consequently, it should be seen as a training carrier intended to provide China’s navy with experience in the conduct of carrier flight operations and combined operations at sea. Reports indicate that China is currently building at least one and perhaps several aircraft carriers on its own, which are expected to be substantially larger than the Liaoning’s 60,000 tons. (An American Nimitz-class aircraft carrier displaces over 100,000 tons.)

In some quarters, this presages a Chinese move to emulate the United States in developing a carrier-centric navy. Indeed, some analysts see China as hewing closely to a Mahanian conception of naval power. But while China may decide to build several aircraft carriers, that does not necessarily mean that the People’s Liberation Army Navy (PLAN) will follow in the footsteps of the United States Navy. Instead, China’s new naval strategy will reflect Chinese requirements and conditions; in short, there will be Mahan “with Chinese characteristics.”

For the United States, it is essential to field an “expeditionary” military, insofar as America’s wars tend to be far from the United States homeland. In essence, the United States has structured its forces to fight “away” games. But China’s primary threats and security concerns are far closer—preventing Taiwanese independence, defeating a revanchist Japan, and dominating the waters of the South China Sea. Indeed, any potential conflict between the United States and China in the foreseeable future is far more likely to be fought on the Chinese doorstep than the American one.

Consequently, China has made substantial investments in “anti-access/area denial” capabilities, including anti-ship ballistic missiles, but also diesel-electric submarines, long-range anti-ship cruise missiles, and the associated C4ISR (Command, Control, Communications, Computers, Intelligence, Surveillance and Reconnaissance) architecture, including over-the-horizon radars and ocean surveillance satellites, to accurately target these systems. China has also developed substantial counter-C4ISR capabilities, including an anti-satellite system that may be able to reach geosynchronous orbit, as well as cyber capabilities that, together, may significantly degrade the American C4ISR network that has been such a key advantage in past American wars. This is consistent with a Chinese military doctrine that focuses on establishing “information dominance” over an opponent by dominating space and the electromagnetic spectrum.

This combination of systems means that China’s aircraft carriers are not expected to fight as the main platform against an opponent’s aircraft carrier, but as part of a joint force. Given the relatively short legs of the next generation of carrier-fighters (i.e., the F-35), and the difficulty of targeting long-range anti-ship systems in a degraded C4ISR environment, this would mean the American carrier strike group would have to close with the Chinese force in order to engage it. The Chinese carrier would therefore be operating under an umbrella of anti-ship ballistic and cruise missiles, which would attack the opponent’s fleet and empty out the escorts’ magazines long before the enemy force is within range of the Chinese force (or shore).

In this regard, the Chinese would not only have the advantage of being able to engage at longer ranges, and sustain those engagements for extended periods, but would also likely employ large numbers of missiles. The PLA has tended to rely on missiles, rather than manned aircraft; opposite Taiwan, for example, are over 1200 short-range ballistic missiles alone. Consequently, the PLA would likely fire salvos of missiles, perhaps dozens per wave, against a high-value target such as an American carrier strike group. This is a far cry from the past two decades of conflict, in which the United States has tended to employ weapons in far smaller quantities.

Indeed, it is an open question whether the Chinese would even necessarily desire a carrier-on-carrier battle, given their investments (and reliance) on shore-based systems, not to mention their heavy investment in submarines. It may well be that China’s interest in aircraft carriers is intended for non-American contingencies, especially in the South and East China Seas.

In both of these areas, there are significant territorial disputes. But the focus of these disputes, whether the Senkakus or the Spratlys and the broader “Nine-Dash Line” of the South China Sea, are all at some distance from Chinese shores—and Chinese bases. The Chinese field a substantial surface fleet, but it still requires maritime domain awareness to be effectively employed.

It may well be then, that China’s carrier fleet is intended to coerce China’s neighbors, in the hopes of dissuading them from continuing to contest Chinese claims. (It is noteworthy that the Chinese term for “deterrence,” weishe, embodies not only dissuasion, but also coercion and compellence.) Over locations in the Spratlys, even a small complement of aircraft from a carrier such as the Liaoning would be more than distant Vietnam could easily deploy and sustain. It would be a substantial show of force, which would arguably be demoralizing for any garrison, and could constitute the force necessary to sustain a “keep-out” or “no fly” zone.

Should such a situation deteriorate, those aircraft could provide valuable fire support. Just as significantly, they could threaten large, slow platforms, such as maritime patrol aircraft or electronic surveillance and electronic warfare platforms. Against any of the local states, including Japan, this would be a difficult threat to counter.

What is less clear, however, is what roles the Chinese navy envisions for its aircraft carrier, and indeed for the entire fleet, beyond the “first island chain” (which stretches from Japan through Okinawa, the Senkakus, and Taiwan, to the Philippines and onward to the Straits of Malacca). China is in a unique strategic position, and it is not clear how it will employ its maritime capabilities.

China is a continental power, in the sense that it is a nation that did not require, and did not exploit, the seas to any great degree. Unlike the United States, Great Britain, or Japan—all classic examples of maritime powers—for millennia, China’s main focus has been on its land borders and developing its large territory. While Admiral Zheng He did engage in long-range maritime expeditions with the “treasure fleets,” these were neither colonizing nor trade efforts—there was no long-term establishment of maritime trade routes. Instead, the mandarins of the Ming court eventually ordered the ships scuttled or burnt and the shipyards destroyed.

With the founding of the People’s Republic of China in 1949, the first generation of Chinese Communist leaders, including Mao Zedong, continued this attitude, seeing little benefit from trade—and therefore little need for a substantial navy. Mao’s successors had a very different view, and made China into a global trading state. As a result, however, China today depends upon the seas as the means of importing the oil and other raw materials necessary to fuel the Chinese economy, and in turn to carry its manufactured goods to various markets. Thus, unlike Napoleonic France, Imperial Germany, or the Soviet Union, China is now a continental power that must have access to the seas in order to sustain itself.

At the same time, the maritime flank has assumed far greater importance in Chinese defense calculations. Just as China’s economy has shifted from autarky to trade, its economic center of gravity has shifted from inland to the coast. Moreover, the trade that flows from those ports must transit the de facto choke points of the “first island chain.” That chain, then, is both a glacis for defending China, but also a barrier preventing easy Chinese egress to the more open waters of the Central Pacific, and the trade routes to the Middle East.

Thus, China has need for the seas, but that does not mean it has a need for a Chinese version of the U.S. Navy. Nor does it have to operate its aircraft carriers in the same way that the United States does. As China builds more aircraft carriers, and deploys them more regularly, analysts should follow the dictate of Deng Xiaoping, and “seek truth from facts.” Chinese carrier operations should be analyzed but not necessarily analogized; rather than comparing them to (and assessing them relative to) those of the U.S. Navy, the most important task will be to carefully observe what they do, without presupposing that the baseline will be American-style carrier operations.