Home » Articles » Not Every Flattop Is an Aircraft Carrier

Not Every Flattop Is an Aircraft Carrier 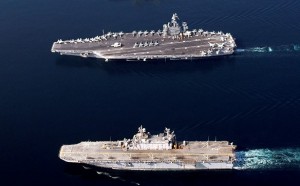 The debate over refueling the aircraft carrier USS George Washington (CVN-73), prompted recently by the Obama administration in its FY15 budget submission, has raised larger questions about the size and shape of the Navy’s power projection fleet.  The indomitable Robert Farley urged last month that the Navy widen its aperture by simply lumping amphibious assault ships in with aircraft carriers. Farley contends that “…we endure the polite fiction that the USN’s 45,000 ton aircraft carriers are not aircraft carriers, but rather some other kind of creature.” Farley is not alone in his views of the potential for LHDs and LHAs to supplement andm in some cases, replace the larger nuclear-powered aircraft carriers.

Let’s face it. A 45,000 ton ship with a large, horizontal flight deck and up to 20 F-35B Joint Strike Fighters sure does look like an aircraft carrier. And I have to admit that on more than one occasion I have very publicly mused at the possibility of making better use of those planes to project seapower ashore rather than simply (or primarily) reserving them for the support of Marines ashore.

We must however, resist the urge to get sloppy with our designations simply because of budget constraints.  The Congress of the United States requires the Navy to operate and maintain eleven aircraft carriers as a way of executing its responsibility to provide and maintain a Navy.  I believe its intent here is clear, though admittedly the statute is worded in a manner which encourages the sort of mischief Dr. Farley advocates.  So why is it important to get the designations right?

What Is an Aircraft Carrier?

An aircraft carrier is more than a ship that carries airplanes.  In order to effectively employ naval aviation for power projection, an aircraft carrier and its embarked air wing must be thought of as a single combat system.  This is a question of fleet design, and it is an important one.  To take advantage of the carrier’s mobility (compared to airfields ashore), the design of this system requires that it be able to operate far from land-based support for at least limited amounts of time in contested environments. The design must also account for the wide range of offensive missions required of carriers, especially as “blue water” surface and submarine threats to naval forces improve.

To conduct coordinated operations, counter enemy aircraft, and be directed to targets more than hundreds of miles away, strike aircraft require organic (to the air wing) situational awareness and command and control. This is provided by Airborne Early Warning (AEW aircraft) – in our Navy, the E-2 (C and D) – four of which are assigned to the average aircraft carrier. This is the naval analog to the Air Force “AWACS” aircraft and is essential for strike aircraft to attack targets far from the carrier at sea or ashore.

Furthermore, because strike aircraft will likely operate within range of enemy surface to air missile systems, the combat system must provide for a means of countering enemy radar and missile systems.  In our Navy, this role is taken by the EA-6B or the F-18G (Growler), of which, five are usually assigned to the modern aircraft carrier.

The aircraft carrier combat system has further requirements for vertical replenishment, medical evacuation, combat search and rescue, anti-surface warfare, maritime interdiction, close air support, intelligence, surveillance and reconnaissance, anti-submarine warfare and special warfare support.  These roles are filled in the modern air wing by the MH-60S and R, of which 12-16 are typically assigned.

Notice that not a single strike fighter has yet to be discussed in this system.  That is because in order to autonomously employ those strike fighters in a contested environment, the aircraft carrier must FIRST account for all of the above.  Only then, when it can perform command and control, intelligence, surveillance and reconnaissance, electronic warfare, combat search and rescue and close-in anti-submarine warfare—can the system effectively be employed to project power.

Put another way, both the size and configuration of the modern aircraft carrier is driven by the design of the combat system it employs.  Four squadrons of strike fighters are only part of the system – clearly the business end, but still only a part.  Employing those four squadrons requires a certain amount of floating real estate, a launching and recovery system, and repair and maintenance facilities able to support multiple types of aircraft for months at a time in a demanding marine environment.  These requirements drive size, and that size drives cost.

What Is an Amphibious Assault Ship?

An amphibious assault ship and its embarked Marine Expeditionary Unit is a combat system designed and optimized to project and sustain land power from the sea.   This combat system is not designed to control the seas or the skies from which it operates. This mission is left to other parts of the fleet design (including the aircraft carrier).  The U.S. Navy operates two types of amphibious assault ships, the Wasp-class LHD and the America-class LHA. As stated earlier, these ships look like aircraft carriers, largely because they have a flat deck and they carry airplanes.  The advent of the F-35B will bring much more capable airplanes to its deck, but those airplanes will still be part of a system optimized for the projection of land power ashore.  There are no AEW aircraft assigned to an LHD/LHA.  All U.S. Navy AEW aircraft are catapult launched, rather than short or vertical take-off (like all aircraft on LHD/LHA which are not catapult equipped).  The LHD/LHA must rely on the carrier based E-2C/D or even land based AEW.

The LHD/LHA does not have the ability to project its airpower ashore using organic electronic warfare assets (such as the EA-6B or the F/A-18G).  If its aircraft are operating in an electronic warfare environment, it must rely on the carrier air wing for its jamming or on land-based assets.  Again, the Navy operates only catapult launched jammers, not short or vertical take-off variants.

And while the LHD/LHA does have a number of helicopters in its combat system, they are largely reserved once again for the primary mission of projecting landpower ashore, rather than in controlling the seas around them.  This mission is left to the helicopters belonging to the cruiser/destroyer escorts that accompany this amphibious combat system to provide it support. In fairness within this comparison, there are also escorts assigned to the aircraft carrier for its support; however, its air wing is by itself capable of contributing to the protection of the ship, which is not the case for the LHD/LHA.

There is considerable expense associated with the choice of nuclear propulsion for our aircraft carriers, which are now exclusively so equipped.  Contrary to a widely held notion, this cost is not made up for in fuel savings over the life of the carrier.  The choice of nuclear power primarily is a performance decision, in that within the aircraft carrier combat system, the propulsion plant for the ship does not compete with the air wing for the 3.5 million gallons of fuel carried onboard.  Virtually every drop of this liquid load is available for the mission of projecting combat power in contested environments.

The LHD/LHA classes use conventional propulsion plants, and the storage area available on the ships must account for both the ship’s needs and those of the embarked aircraft.  As the ships are half the size of the aircraft carrier, this further reduces the fuel available to support the primary mission of the combat system, that of projecting and protecting landpower ashore.

Any suggestion that there could be a large-scale “swap out” of aircraft carriers for more numerous amphibious assault ships must also account for the cost of a much larger combat logistics force (which provide fuel to ships) needed to supply a larger number of conventionally-powered warships. More escorts will also be required for assault ships and their logistics.

Simply put, the aircraft carrier and the amphibious assault ship have different jobs in the Navy, and are designed differently in order to carry out those jobs.  That an LHD/LHA with a dozen or more F-35B’s could in fact be a powerful presence on the horizon does not mean that it can replace a CVN.

Additionally, the math does not scale up.  Those who say, “we could buy three amphibious assault ships for the price of one aircraft carrier” fail to account for the fact that such a transaction would result in the purchase of no combat systems designed to project naval power at a distance and in a contested environment.  The plain, ugly truth is that the large, nuclear powered aircraft carrier is an essential element of the combat system necessary to do that essential job, and it is for the foreseeable future, the best way to do so.

Some suggest that the U.S. Navy could do what other navies do, and equip helicopters for the AEW mission.  Additionally, some say the stealth of the F-35 series will obviate the need for jammers in the future battlefield, or failing that, a short or vertical take-off F-35 “Jammer” could be developed for employment on the amphibious assault ships.  A ship so equipped would almost certainly be inferior to both the present combat system designed to project naval power in a contested environment AND the present combat system designed to project and protect land-power ashore.

These are interesting ideas, and in a navy of more modest capability and capacity, potentially sensible. But that would be a Navy of a far different design than the one we have today and one that would be far less suitable to the needs of the world’s most powerful and important maritime nation.

Bryan McGrath is the Managing Director of The FerryBridge Group defense consultancy and the Assistant Director of Hudson Institute’s Center for American Seapower.