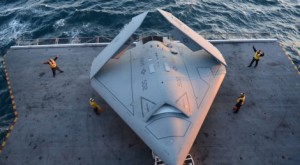 Since the historic series of tests of its X-47B Unmanned Combat Air System-Demonstrator (UCAS-D) on the USS George H.W. Bush last summer, the Navy has reached an inflection point on the future of unmanned carrier aviation. Specifically, the request for proposals (RFP) for the Unmanned Carrier Launched Airborne Surveillance and Strike (UCLASS) aircraft is delayed and the draft has only recently been released in a restricted form. The delay is due to a battle over the UCLASS requirements and whether the platform should resemble a high-end, penetrating aircraft, or a more limited ISR platform suited for low threat environments. The Navy is widely reported to have chosen the latter course; issuing a request for proposals for a “low-end” UCLASS.

This decision has drawn considerable ire from outside groups. Notably, Shawn Brimley recently penned an op-ed in which he chastised the Navy for its “poor judgment” in favoring a more affordable, non-penetrating aircraft. Rep. Randy Forbes, the Chairman of the Seapower and Projection Forces Subcommittee of the House Armed Services Committee has taken notice. He inserted language into his subcommittee’s markup of the 2015 NDAA that would require the secretary of defense to certify the UCLASS requirement before the program is allowed to move forward. He believes that the Navy is not correctly emphasizing the strike mission in its current request for proposals; a nod to those who favor a more “capable” penetrating aircraft. In addition, the full House Armed Services Committee markup cuts UCLASS funding in half as part of a program delay pushed by Rep. Forbes.

The Navy decision is at odds with statements of Navy leaders such as Secretary Ray Mabus, who as recently as January argued that the Navy needs a UCLASS platform able to operate in contested environments (in other words, where other things might shoot at it). Interestingly, the newly minted Deputy Secretary of Defense, Robert Work previously helped define the high-end UCLASS (then the Naval Unmanned Combat Air System or N-UCAS) requirement during his tenure with the Center for Strategic and Budgetary Assessment and later as undersecretary of the Navy.

The UCLASS delays are hampering experimentation and slowing down the integration of a key future technology into the carrier air wing. Additionally, the decision seems contrary to the Navy’s seeming commitment to cutting edge technology for future warfare. However, outside experts such as Mr. Brimley, Bryan McGrath, and Mark Gunzinger who extoll the need for high-end, penetrating platforms may be overlooking a broad range of military operations.

Instead of choosing one capability set over the other, the Navy should rewrite the RFP to reflect a unified acquisition program for two distinct airframes sharing common core technologies acquired on a staggered timeline. The two aircraft would be a high-end, penetrating Unmanned Combat Air System (UCAS) with a robust strike capability and a workhorse Unmanned Carrier Launched Surveillance and Refueling (UCLAS-R) aircraft with robust ISR and limited strike capabilities. This aircraft would also be able to refuel other manned and unmanned platforms. By procuring a smaller number UCAS aircraft and a larger number of UCLAS-R platforms, the Navy will properly align itself with the future security environment.

The Navy needs a stealthy, penetrating unmanned aircraft if the fleet is to successfully execute the future high-end fight as envisioned by the Joint Operational Access Concept and Air-Sea Battle. A UCAS platform will enable the F-35 to maximize its time on station (and potentially extend its engagement range) by providing prompt targeting information. A penetrating unmanned aircraft with strike capability will also enable commanders to engage fleeting targets of opportunity such as road mobile anti-ship missile launchers when other assets may be unavailable or unsuitable. In this instance, Brimley’s assertions about power projection and certain future threats are completely correct and underscore why the Navy needs a penetrating unmanned aircraft.

However by focusing on the high-end, Brimley and others seemingly ignore the more likely and numerous low-end conflicts and crises that characterize the future security environment. While the Navy must stand ready to fight and win against all aggressors, it is prudent to best align ways and means in this period of fiscal constraint. The Marine Corps concluded in its recently published Expeditionary Force 21 that “it is more likely that the next 10 years will be largely characterized by the need to address small-scale crises and limited contingencies.” A UCLAS-R platform offers long loiter ISR capabilities in permissive spaces to support maritime security, humanitarian assistance, stability, and counter-terror missions helping meet the insatiable joint demand for more ISR capacity. An aircraft with limited strike capability such as that offered by the MQ-9 Reaper, would be ideal for a “low threat” world of hybrid missions.

This approach may seem cost prohibitive, but it does not have to be. In fact, the two airframe, two timeline approach may be beneficial. Many of the necessary technologies such as airborne sense and avoid, autonomous deck handling, data links, and autonomous recovery could and should be shared between the two platforms. The staggered timelines will defer the more expensive and complex UCAS until key technology maturation. In addition, the entire program encompassing the UCAS and UCLAS-R should be closely integrated with ongoing Navy efforts to develop an interoperable, scalable, and modular control system for its unmanned aircraft. This will further increase synergies and can help drive down costs across the entire range of systems. The acquisition program should be prioritized in the fiscal year 2016 Navy budget request with a target operational date for the UCLAS-R of 2018–2019 and 2022–2023 for the UCAS.

This is a “walk before you run” approach. It does not sacrifice the high-end capabilities of the UCAS by solely committing to an aircraft that cannot operate in contested zones. The current draft UCLASS RFP continues a troubling trend of the U.S. in ceding its unmanned advantage. It also jettisons almost 15 years of work on the X-47 airframe; an airframe that is well-suited to support the high-end requirement set. The Navy and the United States cannot fall behind or else we will lose a vital technological superiority. In this instance, both sides of the debate are only partially correct. By issuing an RFP encompassing both the UCAS and UCLAS-R, the Navy could demonstrate its understanding of the broad spectrum of future operations and commitment to ensuring that the U.S. maintains its vital edge in key military technologies.

Andrew Metrick is a research assistant and program coordinator at the Center for Strategic and International Studies. His interests include the effect of technology on warfare with a particular focus on the development of unmanned systems by both state and non-state groups.