Home » Articles » Save the Carrier, Sink the LCS

Save the Carrier, Sink the LCS 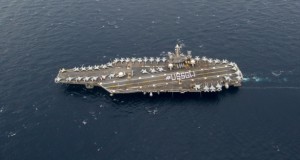 Inactivate a carrier, save the littoral combat ship? It sounds crazy, but that is the current budget plan.

The USS George Washington (CVN-73) is now 25 years old and due for a midlife refueling to prepare for another 25 years of operation.  The project, which will cost nearly $3 billion, would normally be a routine decision involving planning, fuel procurement, updating, and the overhaul.

But funds to commence necessary refueling overhaul planning have not been obligated. The chief of naval operations even removed the refueling funds from the Navy’s list of unfunded priorities list, undermining support for a the carrier fleet of 11 ships mandated by law. Navy management has declared that only planning for defueling will proceed while deferring all overhaul planning and long lead equipment procurement pending resolution of the future sequester impact.

The failure to fund to the refueling and overhaul is another example of how the irrationality of sequestration has produced similarly irrational responses from the Defense Department. Critical defense priorities have borne the brunt of budget cuts while lower priority programs have survived.

Retiring CVN-73 early would place undue stress on the remaining carrier fleet and Navy sailors. In decades past, ship deployments lasted six to seven months. The high operational tempo brought on by two wars as well as intermittent crises and disasters resulted in nine month deployments, taxing people and equipment and contributing to widening maintenance shortfalls. The failure to deliver the first of the new Ford-class carrier on planned schedule didn’t help matters. And now as the Navy has recently finalized a plan to standardize cruises at eight months, it is becoming clear that sequestration would unravel that plan by forcing CVN-73 out of service. Deployments could stretch to ten months.

Top Navy officials recognize this fact. “We need 11 aircraft carriers, and we’re very cognizant of that fact,”Navy Secretary Ray Mabus told the Senate Armed Services Committee in March. “We need those 11 carriers for the operations tempo and for the stress that is put on the other carriers should we lose one.” Rear Adm. Thomas Moore, program executive officer for aircraft carriers, notoriously said, “We’re an 11-carrier Navy in a 15-carrier world.”

Reneging on a commitment to 11 carriers would undermine the rebalance to the Asia-Pacific. The rebalance seeks to reassure allies that the U.S. can sustain its presence in the region and uphold its security commitments. Cutting carriers – the most powerful and recognizable symbol of American power – would be seen as a sign of weakness by the Chinese and our allies in the Asia-Pacific.

From an industrial perspective, fence-sitting on the decision to refuel and overhaul CVN-73 is an expensive proposition. Planning defueling while trying to maintain an option for refueling is highly complicated. Many activities change depending upon the next steps of ship layup or refueling.  Planning for a major project like this is a major undertaking requiring time to evaluate issues and consider better approaches.  A hurried planning effort will result in an inefficient work plan raising costs well above current estimates.  Decisiveness from the Navy and an orderly planning and equipment procurement plan is essential for cost control. Projected costs for the overhaul are far above the impact of inflation. A cost cap must be established and implemented consistent with experience on prior Nimitz-class carriers so other programs are not impacted by cost growth on this ship.

In the zero-sum era of budget caps, keeping CVN-73 will require an offset. While many options exist, one stands out. Many ship acquisition programs are proceeding in fine fashion, but not the Littoral Combat Ship.

The Littoral Combat Ship has been the focus of intense criticism. Top Pentagon officials have concluded the ship is not lethal enough given the current threat environment. Recently, the Government Accountability Office reported that officers in the Pacific fleet had said LCS lacks the speed, range and electronic-warfare capabilities needed to operate in the Asia-Pacific. Recent wargames said to indicate high utility for the ship were based on assumed performance of the untested anti-submarine warfare (ASW) module. This program is not proven. In stark contrast to a carrier reduction, truncation or delay of LCS purchases would have a much smaller impact on the deterrent power of the Navy.

Funds planned for the Littoral Combat Ship over the next three years are a significant portion of those needed to do a proper refueling overhaul. Given the proven effectiveness of the carrier and the unproven characteristics of the LCS, it is appropriate to defer any additional Littoral Combat Ships in favor of refueling the USS George Washington.

Today, the House Armed Services Seapower Subcommittee will markup its portion of the National Defense Authorization Act. Committee leaders should be applauded for the inclusion of funding for the refueling and overhaul of CVN-73 in the subcommittee mark. The mark also cuts the Navy’s LCS request from three to two.

Throughout the defense authorization process, the House and Senate should support current law requiring 11 carriers by directing a full refueling and modernization of CVN-73 and cutting into LCS funds where necessary. The Navy should act upon the rhetoric of its leaders and renew its support for the refueling, and with it the 11-carrier fleet required to meet America’s national security needs.

Everett Pyatt is the Leader of the Project for Defense Management and Acquisition Leadership at the McCain Institute for International Leadership, a part of Arizona State University. He is formerly Assistant Secretary of Navy and Acquisition Executive.