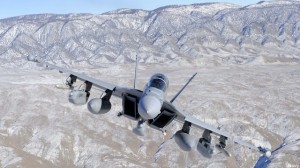 CAPITOL HILL: After several years of appearing to dislike the F-35C, or at least appearing lukewarm to buying it, the Navy today finally revealed why it wants to buy more F-18Gs from Boeing.

Basically, it all boils down to the fact that the F-18G, known as the Growler, emits a broader set of electronic warfare frequencies than does the F-35, Rear Adm. Michael Manazir,  told reporters after today’s House Armed Services air and land force subcommittee hearing. The two planes flying together are a much more effective strike package, according to Navy analysis, than either one flying on its own. The F-18G “supplements and complements” the F-35, he said. In fact, Manazir said the new planes were not needed for strictly naval missions but for joint forces, including fighting alongside our allies. 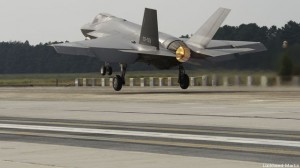 The F-35 is targeted against a narrower array of frequencies and emits only in a fairly narrow swath in front of the aircraft, according to Manazir. (The F-35 is the only US aircraft designed to defeat the most advanced Russian anti-aircraft systems such as the S-400 so the guess is that the JSF emits in frequencies designed to confuse and disable the radar systems that feed those.) The Growler can engage in electronic warfare not only as it flies forward but continues to emit even after it begins to return to base. I asked Manazir whether the F-18′s lack of stealth meant the Growler would have to fly separately and far behind the stealthy F-35, but he said the Growler generates enough power to blanket the area ahead of the F-35s so they can act in a complementary fashion.

Manazir said the Navy has determined that using EA–18Gs reduces the length of a “campaign and increases our effectiveness,” good reasons to buy the aircraft. And this is with the current Growler, not ones that will use the Next Generation Jammer. Those aircraft, he said, would be even more capable.

The Navy, as my colleague Andrea Shalal at Reuters has reported, wants an additional 22 Growlers and put them in its unfounded requirements list, which is presently in the hands of the Office of Secretary of Defense. Now we know why. It wasn’t a conspiracy hatched by an ever-hungry Boeing and a Navy that didn’t really want the F-35C. Rep. Loretta Sanchez, the subcommittee’s ranking member, raised the issue during the hearing and said she would have to consider Manazir’s remarks before making any commitments about the Navy’s unfunded requirement. It would, of course, require both Armed Services authorizers and appropriators to approve the new planes.

Why it took the Navy so long to discuss this and lay to rest the many rumors that have floated about the real reasons the service wanted more Growlers is another question, one I can’t answer.