Home » Articles » Vladimir Putin and the Lessons of 1938

Vladimir Putin and the Lessons of 1938 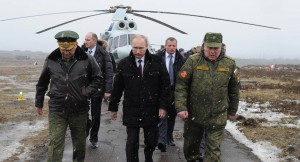 He’s not Hitler. But we’ve got to stop him all the same.

t’s been a busy few weeks for Vladimir Putin. In the last month, the Russian  president has hosted the Olympic Games, invaded a neighboring country and massed  troops along its border. Back in Moscow, the Kremlin has cranked up the volume  of hysterical anti-Western propaganda to a roar while cracking down on the last  vestiges of the free media. All the while, he proclaims he wants peace and  accuses Western leaders of hypocrisy and anti-Russian sentiment. If Putin wanted  to do a better imitation of Adolf Hitler circa 1936-1938, he would have to grow  a little mustache. Equally troubling is that the leaders of Europe and the  United States have been doing a similarly good impersonation of the weak-kneed  and risk-averse leaders who enabled Hitler’s rise in the 1930s.

I know full well that any mention of the maniacal Nazi leader is viewed as  being in poor taste by many. The good news is that it took many years for the  West to finally admit that Putin is a dictator and only a few weeks for  respected public figures such as Hillary Clinton to acknowledge how closely he  is following in Hitler’s footsteps right now. Nobody except the most naked of  Kremlin apologists is debating whether Putin’s anything but a tyrant anymore.  Instead, we’re searching for the right historical analogy: Is it Budapest 1956?  Prague 1968? Austria 1938?

To which I say: Welcome to the club! It remains to be seen, however, if the  media figures and politicians who have so quickly adopted my Anschluss rhetoric  are willing and able to do what is necessary to stop repeating the past. In  recent days, the United States and several European governments have bolstered  their statements, which will, I hope, now be followed up with strong sanctions  and other steps to ostracize and deter Putin.

Over the past nine years I have dedicated most of my life to opposing  Vladimir Putin’s campaign to destroy democracy and civil liberties in Russia. My  efforts have included everything from marching in the streets of Moscow to  traveling to nearly every Russian province to sounding the alarm about the true  nature of Putin’s regime as widely and loudly as possible. Eight years ago, my  main arguments to international audiences were about the myths of Putin’s  Russia. I explained over and over that no, Putin wasn’t really a democratically  elected leader; our elections were a stage-managed charade. That yes, he really  was a bad guy who was supporting rogue states abroad while in Russia he was  persecuting dissidents, locking down the media under state control and  subordinating the Russian economy to the Kremlin and his small circle of  cronies. And if Putin is really so popular in Russia, I asked, why is he so  afraid of fair elections and a free media? For this, many in the West dismissed  me as a fringe troublemaker who might potentially usurp their narrative of how  engagement with Putin’s Russia was going to bring about reform and  liberalization.

Although I accurately saw Putin’s main advantage over his Soviet  predecessors—open access to international markets and institutions—I never  imagined he would abuse and exploit them so easily, or that Western leaders  would be so cooperative in allowing him to do so. Putin’s oligarchs bank in  London, party in the Alps and buy penthouses in New York and Miami, all while  looting Russia under the auspices of a reborn KGB police state. It’s “rule like  Stalin, live like Trump.” The West has fulfilled every cynical expectation Putin  had about how easy it would be to buy his way around any nasty confrontation  over human rights. Even now, with Russian troops occupying Crimea in preparation  for annexation, European countries are terrified of losing any Russian oligarch  money. They are afraid of using the very thing that gives them so much potential  leverage over Putin—exactly as he hoped.

Of course Putin isn’t Hitler, although his potential for devastation is even  greater due to a massive nuclear arsenal under the control of what appears to be  a shrinking and desperate inner circle. I would never minimize the horror of the  Holocaust, the millions of war dead or the heroism of those who defeated the  Nazis. My goal is to scrutinize how the rest of the world did and did not  respond while Hitler the popular German statesman was becoming Hitler the  monster in the 1930s. Today’s dictators are not so averse to learning from their  predecessors. Putin imitating Hitler’s 1936 propaganda methods and Hitler’s 1938  invasion tactics does not mean he will also declare a new Reich and head  straight for Poland. But we should draw lessons from that history, too.

When I tweeted about the possibility of a “Ukrainian Anschluss” on Feb. 20,  the Sochi Games were still underway. I noted that Putin’s invasion of Georgia  took place during the Beijing Olympiad in 2008 and wondered what would dissuade  him from similar action in Ukraine since Russian troops still occupy South  Ossetia and Abkhazia, Georgian territories, with no visible harm to Putin’s  international relations. By the way, Russia was never sanctioned by the European  or the United States over Georgia, and just a few months after the brief war  ended the EU restarted talks with Russia on a formal partnership and cooperation  agreement. It was quite high-minded of them, but when dealing with Putin,  turning the other cheek just gets you slapped again.

A week or so later, to my surprise, “Anschluss” was on the front page of a  Polish newspaper and on the lips of Hillary Clinton. And yet, those who oppose  taking any serious action against Putin’s invasion of Crimea still enjoy  scoffing at the now-obvious parallels with Hitler’s seizure of Austria and the  Czech Sudetenland. It’s a hard habit to break, apparently.

It’s one thing for academics and pundits to calmly sympathize with Putin and  his “vital interests” and his “sphere of influence,” as if 50 million Ukrainians  should have no say in the matter. It’s quite another thing for Barack Obama,  David Cameron and Angela Merkel to fret about the “instability” and “high costs” caused by sanctions against Russia—as if that could be worse than the  instability caused by the partial annexation of a European country by a nuclear  dictatorship, carried out with impunity.

This debate, too, has a Nazi-era parallel, and fittingly enough it was about  money and centered in London, or “Moscow on the Thames,” as many call it now due  to the number of wealthy Russians who park their  assets in British banks and real estate. But it begins in another favored  oligarch destination: Switzerland. In my informal survey of knowledgeable  friends, few had even heard of the Bank for International Settlements (BIS).  This “bank of central banks,” still based in Basel and founded in 1930, is the  sort of shadowy institution that now regularly appears as a villain in Hollywood  movies. It is well worth reading up on the remarkable story of how the BIS  continued to operate during the war, with a board and staff composed of  representatives of both Allied and Axis nations and presided over by an  American. I will limit myself to one remarkable true tale, that of 23 tons of  Czech gold.

The Czechs, seeing the writing on the wall, had transferred almost all their  gold reserves outside of the country for safekeeping by 1939. Some went to  Basel, and 1845 bars of it, worth six million 1939 British pounds, or nearly  $400 million in today’s dollars, went to the Bank of England in London. Just  days after the Nazis took Prague, on March 18, two bank-transfer requests  quickly went out. (Literally at gunpoint, it was later revealed.) One for the  23.1 tons of Czech gold held with the BIS at the Bank of London, to be moved to  the Reichsbank’s account. The other for 26.8 tons held by the Czechoslovak  National Bank in London. The second transfer did not take place, as the Bank of  England followed the new law freezing Czech assets in Britain.

But the BIS emptied the Czech account of the 23.1 tons and just a few days  after that, the Reichsbank moved the gold via transfers and then physically to  its vaults in Berlin. It took weeks before the British and French press got wind  of the story, and the outrage was far too late in coming to do anything about  it. Then in June, a remarkable discussion took place in the British House of  Commons, when a bill was introduced to oblige the Bank of England to consult  with the government on any issue affecting national interests.

As obvious as this measure may sound, the bill went down to defeat  125-196—and this in June of 1939, only months before Hitler’s invasion of  Poland! Sir Herbert Williams spoke for the No camp. “[MP Strauss, the bill’s  sponsor] is merely denouncing the Government and the Bank of England and Herr  Hitler and some other people, which is always pleasant to do,” he said. “[B]ut  it is very foolish to allow yourself to be irritated because of a particular  transaction. It might lead you into a great mess later on.” A great mess indeed.  Winston Churchill was more on point, saying in the House that it would be  difficult to get people to enlist in the military when the administration itself  was “so butter-fingered that six million pounds of gold can be transferred to  the Nazi government!”

This obscure story struck a chord with me when I first came across it in 2009  in a Russian article on the history of the morally agnostic global banking  system. It reminded me of the countless deals struck by Putin and his oligarch  allies all across Europe, and how the governments that could enforce their own  corruption laws so often look the other way. When the oil magnate and dissident  Mikhail Khodorkovsky was jailed and his company Yukos dismembered and sold to  Putin’s friends at the state company Rosneft, the guarantees and IPO were all  underwritten and coordinated by big brand-name Western banks and agencies,  giving Putin and his clique the legitimacy and hard cash they need to stay in  power.

And yet today many leaders and pundits alike cry about their lack of leverage  over Russia, and how unfair it is to “denounce Herr Putin” over a tiny peninsula  when many billions of dollars are at stake. Staying on good terms with Russia is  not important to them, but they are very concerned about staying on the most  intimate terms with Russian money. They have all the leverage in the world, if  only they have the courage to use it. German Chancellor Angela Merkel approached  the right level of urgency on Thursday, when she rallied German business leaders  for sanctions and warned of the “massive economic and political harm” that would  come to Russia should Putin not abandon his ambitions in Ukraine.

Putin is no master strategist. He’s an aggressive poker player facing weak  opposition from a Western world that has become so risk-averse that it would  rather fold than call any bluff, no matter how good its cards are. In the end,  Putin is a Russian problem, of course, and Russians must deal with how to remove  him. He and his repressive regime, however, are supported directly and  indirectly by the free world due to this one-way engagement policy. Putin is no  Hitler, and there will never be another. But we cannot forget the harsh lessons  Hitler taught us about the fatal dangers of appeasing a dictator, of disunity in  the face of aggression and of greedily grabbing at an ephemeral peace while  guaranteeing a