Cumulative strategic bombing campaigns are rarely strategically decisive in themselves.

The Naval Diplomat hails from (or, at any rate, grew up in) the Cradle of Naval Aviation, a.k.a. Pensacola, Florida. The training carrier Lexington – which had the hull number CV-16 decades before the johnny-come-lately Liaoning pilfered it – was a fixture along the waterfront. The U.S. Navy’s Blue Angels’ demonstration team was a common sight in the skies overhead, first flying lumbering F-4 Phantoms, later dimunitive A-4 Skyhawks, and finally sleek F-18 Hornets. So were propeller-driven trainers based in nearby Milton, Florida, daubed in their distinctive white-and-garish-orange paint scheme.

So airy navies have always been there, practicing for battle in the central blue. Perhaps it’s excusable that the air-power heresy has been so tempting of late. Anyway, that’s what I plan to tell the Spanish Seapower Inquisition when they bring out the soft pillows and comfy chairs. No one expects the Inquisition! Among their chief weapons are fear, surprise, ruthless efficiency, spiffy blue uniforms, and near-fanatical devotion to Mahan!!

Anyway. Our intermediate course alighted in Vietnam this past week as our journey through military history starts drawing to a close. Air power is a big part of the case. For a variety of reasons, the United States attempted a campaign of gradually escalating air strikes in the early going, with the goal of disheartening the North Vietnamese and persuading them to cease supporting Vietcong insurgents fighting in the South.

Now, in Admiral Wylie’s scheme of things, air power is a cumulative campaign. (Mysteriously, Wylie doesn’t classify it as such, and indeed says little about air campaigns. The Inquisition must’ve gotten to him.) Nevertheless, the label clearly fits. Like a naval blockade or counterinsurgent warfare, air power involves a series of tactical actions dispersed in space and time. Rather than proceed along a vector or curve from point A to point B on the map – unfolding in linear fashion in space or time – a cumulative campaign looks like paint spatters when plotted on the map.

Few of these individual actions matter much in isolation. In the aggregate, though, they can grind down an adversary over time. That’s the paradox of this mode of warmaking: prosecuted deftly, cumulative operations impose high costs on an opponent, but the material or shock effect of a single engagement is minimal.

That’s what Corbett means when he says naval warfare can only be decisive through gradual exhaustion of an enemy. Blockades have a drip, drip, drip effect that takes time to change minds among the enemy leadership or populace. So it is with aerial bombardment. Corbett also suggests that such endeavors try the patience of combatants who prosecute them. They tend to wear out key constituencies on both sides. Indeed, Wylie doubts cumulative campaigns are ever strategically decisive in themselves.

But what if you could compress a cumulative campaign into a very short timeframe, pulling off what President Abraham Lincoln called “concentration in time?” What if, to take a maritime example, U.S. Pacific Fleet submarines had sunk the Imperial Japanese fleet of tankers and kindred logistics vessels in an afternoon, or even a month, rather than over the space of several years?

Think about the psychological impact of such a campaign. Clausewitz defined “absolute war” as a single act of unconstrained martial fury, or as a simultaneous or near-simultaneous series of such acts. Cumulative effects unleashed all at once might stun the targeted society and its leadership – much as absolute war would. That’s the conceit behind “shock and awe” campaigns like the one waged against Iraq in 2003. Needless to say, the material damage from such a thunderclap would also be fearful to behold – as indeed it was against Japan.

Time, then, is a critical variable. Given time – especially in campaigns like Operation Rolling Thunder, the initial U.S. air campaign in Vietnam – a guileful opponent can move things around and disperse them, attenuating the assault’s effects while ensuring that even a successful air strike does less damage. He can conceal important assets while displaying tempting but false targets. And so forth. That’s doubly true if – as in Rolling Thunder – bombing pauses interrupt the campaign, giving the opponent a respite to experiment and adapt.

In effect a nimble opponent can drive down the amount of force applied from aloft. Input measures – sorties flown, amounts of ordnance expended – might suggest an air force is dealing out repeated, hard blows. The reality might be something far less. And if the pounding aviators are meting out is less than it appears, the operational and strategic results are apt to disappoint as well.

Near-simultaneous bombardments, by contrast, deny the belligerent under assault any time to adapt. He’s hard-pressed to find and deploy countermeasures in time to nullify the air campaign, in whole or in part. Options are few. 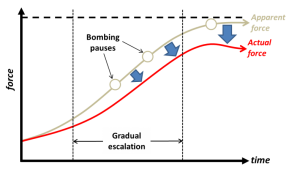 So the logic of denying an adversary time to adapt – to adjust to and balk your strategy – is eminently sound. That’s what the late Colonel John Boyd was getting at with his concept of “fast transients.” Suddenly altering the tactical or operational setting around an antagonist curtails his capacity to adjust in material terms. Yet Boyd was mostly interested in getting inside the enemy’s head. Just as one fighter pilot (like Boyd) springs abrupt changes in course, speed, or altitude on another, so operational commanders can try to disorient opponents in any warfare domain.

Repeated changes to the surroundings, in short, addle an opponent’s brain – leaving him at the mercy of the combatant doing the addling. But it behooves those who make war to consider the possibility: what if not? What if the best-laid plan fails to persuade a stubborn, resilient opponent to yield? Once you’ve sprung a fast transient through suddenly escalating the degree of violence, what’s the encore if one’s needed?

There’s the rub. I suppose there’s further escalation, either “vertically” up the ladder of force or “horizontally” to new places or theaters on the map. Presumably, though, you already escalated as high as you physically could, or as high as was politically acceptable, during the fast transient. Escalating horizontally likewise means ferreting out other things the adversary holds dear – and that you failed to hit the first time around. So in a sense you’re back in gradual-escalation mode, turning up the temperature while correcting deficiencies on your target list.

Or, there’s integrating the air campaign, a cumulative enterprise, with a sequential campaign that harnesses other implements of war. That’s what Admiral Wylie would probably recommend were his ghost to comment on this problem. So I guess that leaves us taking a joint approach that merges cumulative implements like air and sea power with sequential efforts on the ground. After all, says Wylie, air forces can destroy from the air but not control. The man on the scene with a gun is the final arbiter of control.

Mankind dwells on land. That’s where military questions are settled. That basic insight should be the north star for airmen – as for seafarers. 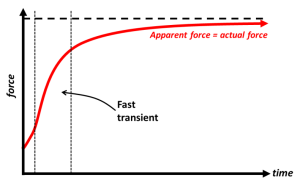