Home » Articles » Putin Is Playing a Game of His Own

Putin Is Playing a Game of His Own 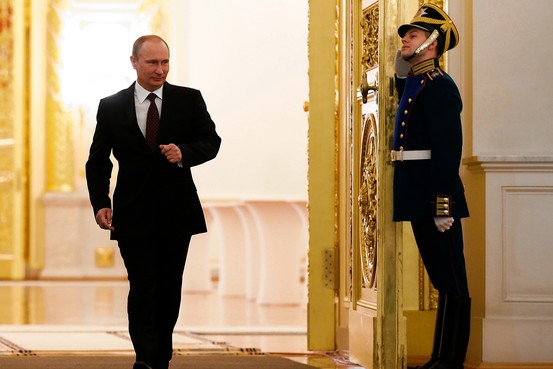 Vladimir Putin arrives to deliver his state of the nation address in the Kremlin on Dec. 12, 2013.                     RIA-Novosti/Associated Press
These days, Russian diplomacy is a dazzling spectacle.

The most daring and acrobatic figure in Sochi this week isn’t a snowboarder; it is  Vladimir Putin, whose death-defying geopolitical gamble is the hottest game in town. With more twists and turns than a bobsled race, more fancy footwork than a figure-skating final and more dips and flips than a mogul run, Russian diplomacy is a dazzling spectacle these days—and despite his considerable handicaps, Mr. Putin is skating rings around his clumsy and clueless opponents in Washington and Brussels.

The Russian president’s biggest problem is simple: Post-Soviet Russia is a weak state. Take away its gas and oil resources, nuclear arsenal and Cold War-era intelligence networks, and there is not much of a there there. With an economy the size of Italy’s, an ethnic Russian population in decline, a booming China rising nearby and serious and sustained unrest in the Caucasus, Russia hardly has the look of a great power.

But Mr. Putin can’t tell his citizens to relax and enjoy the decline; unlike Britain or France, Russia can’t let its imperial glory go. The fall of the Soviet Union is too recent, the pain of loss too great.

Soon after Mr. Putin came to power in 1999, he made his name by crushing a breakaway rebellion in Chechnya, which had gained de facto independence, and flattening its capital, Grozny—only to see the secular rebels he killed or jailed supplanted by ruthless Islamists. To stay in power for the long term, Mr. Putin needs to fight terrorism and insurgencies at home, to make Russia powerful and respected abroad and to make progress on the Russian establishment’s dream: to reconstruct the Soviet empire in a postcommunist world.

That goal is still far off, but Mr. Putin has made more progress than many Westerners realize. He stopped NATO’s post-Cold War expansion into Russia’s backyard in its tracks; beyond the three Baltic republics, no other former Soviet state looks to be joining NATO soon. Meanwhile, as the U.S. war in Afghanistan winds down, Russia’s economic and military power in Central Asia grows.

But for Mr. Putin, everything pales beside the battle for Ukraine. After Russia, Ukraine was the largest and most important republic within the Soviet Union; if Ukraine truly aligns its economy with the European Union, Russia can never be more than a secondary European power. Three centuries of empire-building will be over, and Russia—like Great Britain, France and other post-imperial European powers—will have to develop a new self-image and a new foreign policy as it glumly adjusts to a smaller role in the world.

Last fall was a near-death experience for the Putin project. The EU thought Ukraine was ready for an association pact that would have killed Russia’s hopes of rebuilding its empire. But some fast Russian footwork—and the promise of $15 billion (with, presumably, some sweeteners for helpful oligarchs in Kiev)—changed Ukraine’s mind. The EU was left at the altar as Ukraine played runaway bride.

Stunned by Russia’s success, the EU and the U.S. are trying to drag Ukraine back to the wedding chapel—so far without success. The U.S. and EU’s chances haven’t been helped by railing at each other in public and private; “F— the EU!” the Obama administration’s top European diplomat memorably told the U.S. ambassador to Ukraine in a recording that someone, presumably Russian, recently released to the world on YouTube. (The State Department called the episode “a new low in Russian tradecraft.”) Meanwhile, Mr. Putin continues bullying and bribing. So long as Ukraine dithers (and dithering comes naturally to a divided country with weak political institutions and strong oligarchs), his dream lives on.

Further afield, Mr. Putin has enjoyed striking diplomatic successes in the Middle East. Given the simmering Sunni jihadist insurgency in the Caucasus, plus Moscow’s long-standing ties with Syria and Iran, Mr. Putin thinks Russia will be more secure if the Shiites win the sectarian struggle convulsing the region. Chechens and other Russian citizens are fighting alongside Sunni Arab militants in Syria and Iraq, he notes, and the leaders of Shiite Iran hate and fear Sunni jihadists as much as he does. Moreover, both the Iranians and the Russians would like to see the U.S. cut down to size.

Viewed from Moscow, the past six months have been a dream come true in the Middle East. The Americans kept shooting themselves in the foot, Syrian President Bashar al-Assaddanced all over President Obama’s self-declared “red line” against the use of “a whole bunch of chemical weapons,” and the Sunni jihadists fighting Mr. Assad lost ground even as they turned their guns against one another. Washington’s closest regional allies (Saudi Arabia and Israel) have rarely had less confidence in U.S. policy-making or will, and anti-Americanism is the one political idea shared by the post-coup regime in Egypt and its Muslim Brotherhood foes.

Mr. Putin has also advanced on the propaganda front. The Edward Snowden caper was a stunning Russian success—and an embarrassing U.S. failure.  An old KGB hand, Mr. Putin knows that intelligence and propaganda were among the Soviet Union’s greatest assets—and now, Russia’s spooks and spinmeisters are back. The former National Security Agency contractor’s revelations about the agency’s surveillance programs weren’t just fun; they drove a wedge between the U.S. and its European allies.  Brezhnev and Stalinwould have approved.

But time isn’t on Mr. Putin’s side. Russia’s failure since 1989 to build an effective economy keeps his reach short. U.S. diplomacy may be wobbly, but U.S. development of shale oil and gas attacks the core of Russia’s strength. With the U.S. out of the gas-importing business, a lot more natural gas is on world markets, and Gazprom‘s  customers are demanding better terms. Fracking hurts Mr. Putin in the wallet, and Russia has never had much cash to spare.

Worse, no matter what Russia does, China keeps rising in the East, and Germany is becoming more active in the West. Russia’s population is changing, with Muslim minorities growing rapidly and Christian Slavs fading away. Across Russia’s south, militant Islamists quietly slip into the mosques and madrassas. As Russian power dissolves, Mr. Putin is left to vamp in the spotlights and do what he can to reverse, postpone or hide the decline.

Considered purely on form, Mr. Putin is easily the world’s most accomplished diplomatic tap dancer. (The clumsy Chinese can’t make a move without inflaming neighbors worried about their growing power, and the top diplomats of the EU and the U.S.— Catherine Ashton and John Kerry—are often all left feet.) But how long can Putin figure skate while the ice beneath him melts?

Still, Americans should not get too smug. Sometimes smart underdogs win. For Mr. Putin’s razzle-dazzle diplomacy to succeed, he needs one thing above all: for his opponents to make mistakes. So far, the U.S. and the EU have given him all the opportunities he could want. If the West doesn’t get its act together soon, Mr. Putin just might end up with a brace of gold medals.

—Mr. Mead is a professor at Bard College and the author of “Special Providence: American Foreign Policy and How It Changed the World.”