THE U.S. NAVY: 5 QUESTIONS TO PONDER

I believe the answer to this question is a definite “maybe”.  That is, if the United States wishes to retain its position as the world’s premier political, military and economic power, then yes, it needs a powerful, globally-deployed Navy.  If retaining these positions is deemed by the citizenry to be unimportant, a powerful, globally-deployed Navy would be an unnecessary waste of national treasure.

As Peter Swartz has ably demonstrated, there has never been a time in our nation’s history in which we did not have naval forces deployed far from our own shores.  Those without Peter’s deep knowledge of history tend to assume that it was the responsibilities of Cold-War free world leadership that created our preference for forward deployed naval force.  And while the nature and capabilities of those forces did change after World War II, the fact of their existence, the daily presence of American flagged warships wherever the nation’s commercial and diplomatic interests were, has remained constant.  As Peter likes to say, the U.S. Navy was global long before it was powerful.

Now, because it has always been that way is insufficient rational for things to remain that way.  But I do wish to urge caution upon those prone to question the status quo simply because it is the status quo.  We currently sustain a powerful, globally-deployed Navy for one very important reason, and that is to guarantee freedom of the seas.  Freedom of the seas is the irreducible minimum condition necessary for global trade, the overwhelming majority of which travels by sea.  This salutary condition has a foundational impact on our nation’s ability to import and export goods, hence, our prosperity is utterly dependent upon it.  The prosperity of other nations, all other nations, is similarly dependent.  We must have trading partners with the money to buy our goods and the capital to create goods for our markets, and the free movement of commerce upon the oceans underwrites this.

For over 500 years, the global system of commerce has simply worked best when there was a dominant naval power ensuring that the seas were free and open to commerce among nations.  This role has never been undertaken out of a sense of charity or magnanimity; no, quite the opposite.  The dominant naval power exercised this responsibility because its own economic might was enabled and increased by it.  That others benefitted from it was incidental.

What does America need the U.S. Navy to do?

The modern U.S. Navy has many missions and performs numerous tasks, but as I said earlier, I have come to believe it has one overarching purpose—and that is the maintenance of freedom of the seas.  It does this by maintaining forward deployed naval power that deters would-be aggressors who might seek to impose conditions upon that freedom.  This power is capable of sustained combat operations on, over, under and adjacent to the sea.  It does this through its ability to marshal overwhelming combat power in a relatively short span of time from forces already there or within a few days steam of being there.  This ability provides friends and allies with the assurance that we are committed, we are not leaving, and we will do what is necessary to ensure the seas remain unmolested by regional violence.

Some might wonder whether the Navy needs to be prepared to conduct massive humanitarian operations, such as is now underway in the Philippines.  I would answer, no, the nation does not need its Navy to do those things.  But doing them is a useful demonstration of commitment and will, a palpable demonstration of the charity of the American people, and a strong signal to those who might challenge us that the power arrayed there for humanitarian needs was planned and procured for more violent ends, and can pursue those ends as quickly and efficiently as it now pursues humanitarian ends, should the need arise.

Is the U.S. Navy currently organized, trained and equipped to do what it needs to do?

That the Navy is currently prepared to do what the nation needs it to do is the result of a confluence of a number of circumstances  First, it has been the world’s dominant Navy since World War II, so it starts from a position of advantage.  Second, the end of the Cold War dramatically reduced the threat posed by any other nation’s Navy, leaving the U.S. unchallenged in its ability to control the seas and impose its will.  Third, the precision weapons revolution has empowered the Navy to deliver considerable combat power ashore with great confidence from extended range.  And fourth, the U.S. Marine Corps, the land component of dominant American Seapower—remains the world’s most feared middleweight military force.

But the trends going forward are troubling, and cause me to question whether our future force is correctly architected to deal with rising threats and challenges.

China—while in my view not able or willing to displace the global role of the U.S. Navy as guarantor of freedom of the seas—is building the force necessary to deny the U.S. Navy the ability to impose its will in the Western Pacific.  Deny the U.S. the ability to control the seas, and you deny it the ability to project power.  Deny it the ability to project power, and you inject doubt into the minds of American friends and allies in the region that we can continue to underwrite freedom of the seas.  Inject doubt in the minds of friends and allies and the seeds are sown for destabilizing arms races on the one hand, and or coercion on the other.

The United States must organize, train, equip and employ its naval forces in the Western Pacific to the degree that it remains the dominant power in the region, and not necessarily measured by the Marquess of Queensbury rules.  As long as we desire to retain our status as the world’s dominant political, military, and economic power, we must ensure that China understands that whatever the day is, that day is not the day to start the war that threatens the freedom of the seas.

Increasingly, China’s modernization coupled with the shrinking size of the U.S. Navy lead me to believe the scales are slowly tipping toward China, not in terms of its ability to displace the U.S. as the world’s dominant naval power, but in its ability to deny the U.S. Navy the capacity to impose its will in the region.

What can be done in the face of our current fiscal downturn?

I do not imagine that you would be surprised to hear me say that I believe the U.S. Navy should be protected and sustained during this time of austerity.  In my view, what the Navy and Marine Corps do to underwrite American prosperity is far and away more strategically important than the warfighting depth offered by the combat power of the U.S. Army and U.S. Air Force in a time of relative peace.  This direct, unchanging, and transcendent truth leads me to believe that American Seapower should be privileged at the expense of land and air power, especially during a time of economic malaise.  Instability in the Western Pacific or the Arabian Gulf would have an immediate, deep, and lasting impact on the ability of our economy to continue its recovery, exacerbating the fiscal conditions that lead us to wonder what can be done in the first place.

What is the future of the U.S. Navy?

Without a change in current thinking, I believe the future of the U.S. Navy is to be smaller, less powerful, less globally-deployed, and capable of doing fewer things simultaneously.  It will continue to field technologically advanced capabilities, but they will be less widely deployed and less available due to the smaller fleet.

I believe that while much noise will be made in Washington about shifting budgets, the political realities coincident to cutting the Army and Air Force to any real degree are unlikely to be made, especially in the post Goldwater-Nichols world of Jointness uber alles.

I believe that without enlightened thinking about our maritime industrial base, we will begin to lose critical tier 2 and 3 vendors who will no longer find it profitable to supply the needs of the U.S. Navy.  This will of course, make the already expensive proposition of building and maintaining ships even more expensive, resulting in an even smaller Navy.  Additionally, I believe the number of large building yards will decline, reducing competition which would also lead to more expensive (and therefore fewer) ships.

Under the current trajectory, I believe the U.S. Navy will remain the world’s dominant power for decades to come, but I believe the People’s Liberation Army Navy will challenge the U.S. in all domains in the Western Pacific by 2020.

It does not have to be this way.  The Military-Industrial-Congressional complex could begin to think more strategically.  It could begin to think about China as a competitor requiring a real response.  It could once again grasp what our founders knew, that our security and prosperity was a function of the large oceans that bathe our shores, the freedom of which must be maintained as a first principle.

Thank you very much.

Bryan McGrath is the founding Managing Director of The FerryBridge Group LLC (FBG). A retired Naval Officer, Bryan spent 21 years on active duty including a tour in command of USS BULKELEY (DDG 84), a guided-missile destroyer homeported in Norfolk, Virginia.  His final duties ashore included serving as Team Lead and Primary Author of the US Navy’s 2007 Maritime Strategy “A Cooperative Strategy for 21st Century Seapower.” McGrath is an Adjunct Fellow at the ‎Hudson Institute and Assistant Director of the Hudson Center for American Seapower. 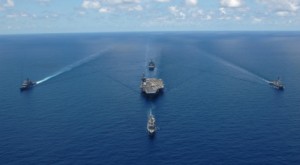