Home » Articles » No Longer Unthinkable: Should US Ready For ‘Limited’ Nuclear War?

No Longer Unthinkable: Should US Ready For ‘Limited’ Nuclear War? 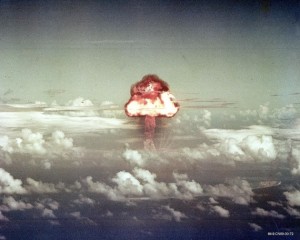 AI FORCE ASSOCIATION HQ: For more than 60 years, most Americans have thought of nuclear weapons as an all-or-nothing game. The only way to win is not to play at all, we believed, because any use of nukes will lead to Armageddon. That may no longer be the game our opposition is playing. As nuclear weapons proliferate to places that might not share our reluctance to use them in small numbers, however, the US military may face a “second nuclear age” of retail Armageddon for which it is utterly unprepared.

Outside the US, both established and emerging nuclear powers increasingly see nuclear weapons as weapons that can be used in a controlled, limited, and strategically useful fashion, said Barry Watts, an analyst with the Center for Strategic and Budgetary Assessments, arguably the Pentagon’s favorite thinktank. The Cold War “firebreaks” between conventional and nuclear conflict are breaking down, he wrote in a recent report. Russia has not only developed new, relatively low-yield tactical nukes but also routinely wargamed their use to stop both NATO and Chinese conventional forces should they overrun Moscow’s feeble post-Soviet military, Watts said this morning at the headquarters of the Air Force Association. Pakistan is likewise developing tactical nukes to stop India’s much larger military. Iran seeks nuclear weapons not only to offset Israel’s but to deter and, in the last resort, fend off an American attempt to perform “regime change” in Tehran the way we did in Baghdad. The US Air Force and Navy concept of “AirSea Battle” in the Western Pacific could entail strikes on the Chinese mainland that might provoke a nuclear response.

It’s precisely because US conventional power is so overwhelming that the temptation to turn to nuclear weapons to redress the balance is so irresistible. Ten years ago, the Iraqis sidestepped American dominance in the middle of the spectrum of conflict – regular warfare with tanks, planes, and precision-guided non-nuclear weapons – by going low and waging guerrilla warfare, for which the US proved painfully unprepared. In the future, nuclear proliferation means more and more countries will have the option to sidestep US conventional power by going high and staging a “limited” nuclear attack, for which we aren’t really prepared either. Indeed, some countries, notably a nuclear Iran with its terrorist proxies and North Korea with its criminal ties and special operations forces, could outflank America’s conventional military from both sides at once.

So, could the US military keep going after losing an Army brigade or a Navy aircraft carrier to a tactical nuclear strike? “I don’t think we’ve thought about continuing to do conventional operations in an environment in which some nuclear weapons have been used, [not] since the Cold War,” Watts told me after his talk. “You’ve got to have equipment that continues to work in that environment, and, in general, we don’t.”

For example, one of the ways the Army economized on its new “Nett Warrior” communications gear for foot troops was to scrap the requirement for its circuit to survive the electromagnetic pulse, or EMP, from a nuclear detonation, which can spread far below the lethal blast and radiation effects: Such shortcuts make sense for Afghanistan and Iraq, but not for Korea.

“So there are a lot of things you might want to invest in, to put it mildly,” said Watts.

One particularly controversial suggestion Watts offered is for the US to invest in new tactical nuclear weapons of its own. Currently, Watts argued, if an enemy attacks with a relatively low-yield atomic bomb, America’s choices for a response are limited to conventional strikes or thermonuclear weapons, with very little in between.

“The problem is most of the warheads we’ve retained… are huge weapons,” Watts said. “The ones on the [submarine-launched] Trident missiles are 450 kilotons.” The Air Force’s B-61 warhead is small enough to fit in the new F-35 Joint Strike Fighter, and its yield can be “dialed down” to as low as an 0.3 kiloton yield, but the B-61 is a 60-year-old design that’s been out of production for years, although old bombs have been modernized. Said Watts, “Congress’s absolute prohibition about developing new warheads… makes it very difficult for us to have credible nuclear weapons that could be used in a limited way, not at the Armageddon level.”

Adversaries are less likely to be deterred by America’s nuclear arsenal if they decide we won’t strike back with our big bombs in response to a limited, low-yield nuclear attack on US troops. It’s even less credible the US will retaliate massively if the adversary stages the nuclear strike on its own soil as a last-ditch defense against “regime change,” as Russia has wargamed and as Iran is no doubt tempted to do. Least credible of is US nuclear retaliation for a nuclear attack that doesn’t actually kill anyone: An enemy with even modest space capability can detonate a nuclear warhead high in the atmosphere, where it will generate a high-altitude electromagnetic pulse (or HEMP) that disrupts the electronics on which the US military depends without actually taking any lives. (Congress has held hearings on electromagnetic pulse in the past, albeit focused on threats to the American homeland rather than US forces abroad, but legislative interest has waned since the 2012 defeat of Maryland Rep. Roscoe Bartlett, the Hill’s foremost hawk on EMP).

Whether it’s morality or lack of suitable weapons that holds the US back from retaliating to a limited nuclear attack in kind, the American military at least needs to plan for how to take an atomic hit and keep on going. “You may end up fighting a nuclear/EMP environment even though you’re not using those kinds of weapons yourselves,” Watts said.

Watts is less worried about the threat of nuclear terrorism than he is about nation-states. He doubts Iranian mullahs, for example, would trust even their favorite proxies, Hezbollah, with a nuclear weapon. But he’s skeptical of the conventional wisdom that the Chinese have sworn never to use nuclear weapons except in response to a nuclear attack on them.

“If you start digging into the literature [by Chinese strategists], they say all the politically correct things in the front of the book about how we’re not going to use nuclear weapons first,” Watts said. As you read more deeply, however, he found an unnerving willingness to consider nuclear detonations to generate EMP, for example, under the special circumstances of what Chinese doctrine called “local high-tech warfare under informationalized conditions.”

Such special circumstances might well arise in a Western Pacific war, perhaps triggered by a Sino-Japanese clash over the Senkaku Islands, in which the US came to an ally’s defense by waging a long-range AirSea Battle. In theory, both sides could swear off strikes on each other’s homelands and try to limit the fighting to the air and sea. But there’s one big problem: While America’s main weapons for a naval battle are ships, submarines and aircraft launched from carriers at sea, China’s naval arsenal depends heavily on long-range sensors and missiles based on land. The US would either have to take shots from Beijing’s best weapons without responding or escalate to an attack on China’s coastal provinces.

Watts did not discuss this topic in detail, but another strategist at the discussion did. “The issue is escalation… if you cross the Chinese coastline,” said Peter Wilson, a national security consultant. “How do you keep the war regional?” Even if the US strike causes no Chinese casualties – for example, a precision missile or even cyber attack that shut down China’s power grid – “the reply may be a HEMP shot over Hawaii.”

“We’ve gotten very used to bombing countries, going downtown and working our will” from Baghdad to Belgrade, Wilson said. When the target has nuclear weapons, however, even using America’s fading conventional superiority starts looking a lot more dangerous.