Nine nations in the world have aircraft carriers, but they vary greatly in capacity and design.

Leading the pack are the United States’ nuclear-powered “supercarriers”. At the other end of the spectrum is the Thai Royal Navy’s helicopter carrier, which is never fully armed and rarely put to sea.

Now the mainland is planning to build one of its own.

Details of the mainland’s first aircraft carrier have been subject to intense speculation since Beijing confirmed its intention to build one.

Most analysts believe it will be similar to the former Soviet Union’s unfinished Varyag, bought by China from a Ukrainian shipyard through a Macau tourism company in 1998. 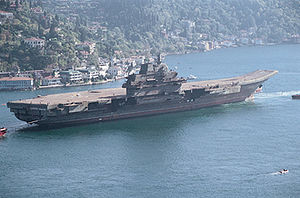 Varyag was of the same class as Russia’s only aircraft carrier – the Admiral Kuznetsov, Andrei Chang, editor-in-chief of the Canada-based Kanwa Asian Defence Monthly, said.

“The first Chinese aircraft carrier will be of medium size with more than 60,000 tonnes of full displacement, loaded with 24 Su-33-type folding-wing fighter jets and more than 20 anti-submarine helicopters,” Mr Chang, who has monitored China’s carrier project for more than 10 years, said.

As on the Admiral Kuznetsov, the 16,700-square-metre flight deck on the carrier would feature a final section angled upwards at 12 degrees to assist takeoff, he said. Four arrestor wires would be fixed on the other side of the deck to help landings by 26-tonne fighter jets such as the Su-33. 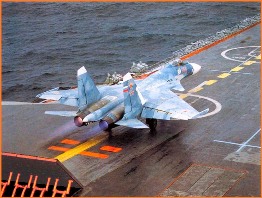 A Shanghai -based military expert, who has visited one of the mainland’s aircraft carrier production shipyards, said the carrier would be gas-turbine driven with a displacement of 65,000 tonnes. “China will not be, and is in fact incapable of, building a nuclear-powered supercarrier such as the USS Ronald Reagan, as it wouldn’t match our traditional military strategy,” he said.

“(China) chose the medium-sized one simply because we prefer qualities of small size, speed and agility.”

The USS Kitty Hawk has been the centrepiece of the US carrier battle group that has patrolled the South China Sea in the past few years. It will return to the US for decommissioning on January 31, to be replaced by the nuclear-powered Nimitz-class carrier, the USS George Washington, which is already based at Yokosuka in Japan.

The US$4.5 billion USS George Washington is the same class as the USS Ronald Reagan and displaces 97,000 tonnes, can carry 90 fixed-wing aircraft and helicopters, and accommodates 6,250 crew members.

Accompanied by at least four auxiliary vessels, the US battle group can support itself in deep waters for up to three months.

The Shanghai expert said: “However, our first (carrier) battle group might need up to 6,000 people as per the Reagan because the number of our army officials will be double that of the US due to a system of political commissars at every level to monitor the army’s thinking and morale.

“The other key reason (for more crew) is that we have no operational experience on the high seas.”

He said the recent first foray by People’s Liberation Army Navy ships to the pirate-infested Gulf of Aden was aimed at testing combat capability on the high seas.

The Gulf of Aden mission was the first time since the Communist Party came to power in 1949 that its navy had been deployed on such a mission – protecting UN aid shipments, key maritime trade routes and Chinese vessels in foreign waters.

Mr Chang said the mainland had been structuring its navy to accommodate an aircraft carrier strike group since the 1980s.

The carrier project was first proposed to the PLA’s Central Military Commission in the early 1980s by Admiral Liu Huaqing, the navy’s former chief commander and commission vice-chairman. In 1985, he also established a training course for aircraft carrier commanders.

In its 10-year plan set out in 1986, the central government postponed Admiral Liu’s project under Deng Xiaoping’s “Daoguang Yanghui” policy – a diplomatic doctrine stressing the need to maintain a low profile on the international stage.

“But the PLA Navy believed they would be allowed to build aircraft carrier battle groups at some point in the future,” the Shanghai expert said.

With the mainland’s shipbuilding capabilities and skills in copying other countries’ technology, the expert said it intended to build four aircraft carrier strike groups and operate all of them together by 2020.

Mr Chang said China’s first aircraft carrier battle group might have its first sea trial in 2014, with the help of Russia and Ukraine, but that it was impossible for it to launch another three within six years.

“It will take a long time to train a whole aircraft carrier battle group in joint operations which involve at least six warships and manpower in the thousands,” Mr Chang said.